The age of insulin parcels may matter, researchers say, when it comes to diagnosing and treating diabetes 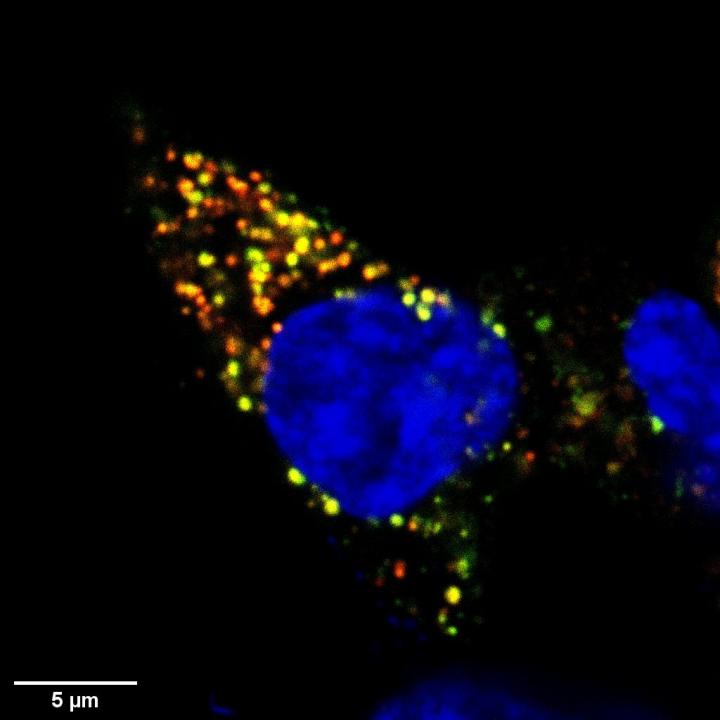 A study in the Journal of Biological Chemistry describes a new way to determine the age of insulin-storage parcels, known as granules, and sheds light on how their age affects their release into the bloodstream. The findings could help experts better understand diabetes and fine-tune therapies for it.

Insulin is a hormone that manages the level of sugar, or glucose, in the bloodstream. It is secreted by the pancreas into the bloodstream when blood sugar levels rise. When insulin circulates in the bloodstream, muscle and other cells absorb glucose to use it as fuel, and so blood sugar levels decline. In Type 2 diabetes, formerly known as adult-onset diabetes, this process fails. Glucose builds up in the blood, either because the pancreas cannot produce enough insulin to keep up with dietary sugar intake or because the gland simply isn’t working as it should.

About one in 10 Americans and more than 415 million people worldwide have diabetes, according to the Centers for Disease Control and Prevention. Up to 95% of them have Type 2. Treatment often requires painful and frequent insulin injections or the use of mechanical insulin pumps. There is no cure.

The researchers noted in their paper that existing therapies for diabetes increase insulin secretion without regard for insulin granule age. “Accordingly,” they wrote, “these approaches are effective only for a short period.”

Insulin is produced by β-cells of the pancreas and stored in insulin granules, which are then organized into pools and finally secreted into the bloodstream. Pools of young insulin granules are preferred for secretion over pools of old ones, for reasons that remain unclear.

The scientists whose work was published in JBC wanted to learn more about how pancreatic cells can distinguish between pools with young or old insulin granules.

“Current therapeutics do not take the existence of pools into consideration,” said Melkam Kebede, an assistant professor at the University of Sydney who oversaw the study. “By evolution, the (pancreatic) cells have determined what to secrete and what not. Understanding the mechanism and molecular differences between the pools definitely is going to lead us into something meaningful.”

In their paper, the researchers describe a technique they developed to distinguish younger insulin granules from older ones. The scientists placed a fluorescent protein, called Syncollin-dsRedE5TIMER, into newly created insulin granules and used a laser and detector to visualize that marker. In younger granules, the marker emits a green fluorescent light; as granules get older, the marker begins to emit a red fluorescence.

The researchers then set out to learn more about how pancreatic cells sort insulin granules into pools and release them when they are experiencing metabolic stress. The concern is that, when under stress, “β-cells could potentially lose their ability to distinguish young (granules) from old,” they wrote in their paper.

The team isolated β-cells from mice and simulated chronic low, high and normal blood sugar levels and found different glucose levels determine which pools of insulin granules, young or old, are secreted. They saw similar results when they used a common mouse model for Type 2 diabetes known as the db/db mouse.

These findings are important, Kebede said, because “all the drugs that affect insulin secretion…just push any granule within the cell and eventually fail.”

Older insulin granules are naturally degraded in normally functioning beta cells, noted lead author Belinda Yau of the University of Sydney, but, in diabetes, a greater percentage of insulin granule pools are secreted, and there’s a mismatch in how they’re released.

Being able to visualize insulin granules as they age and understanding better how their age affects their secretion may lead to the discovery of new biomarkers capable of indicating the development of diabetes and could help in the creation of therapies for Type 2 diabetes.

“If we can understand what makes up the granules and makes them do what they do, we can figure out a way to target the things that slow down or speed up their secretion,” Yau said.

JBC is a weekly peer-reviewed scientific journal that publishes research “motivated by biology, enabled by chemistry” across all areas of biochemistry and molecular biology. To read the latest research in JBC, visit http://www.jbc.org/.