Sonic Dirac points and the transition towards Weyl points 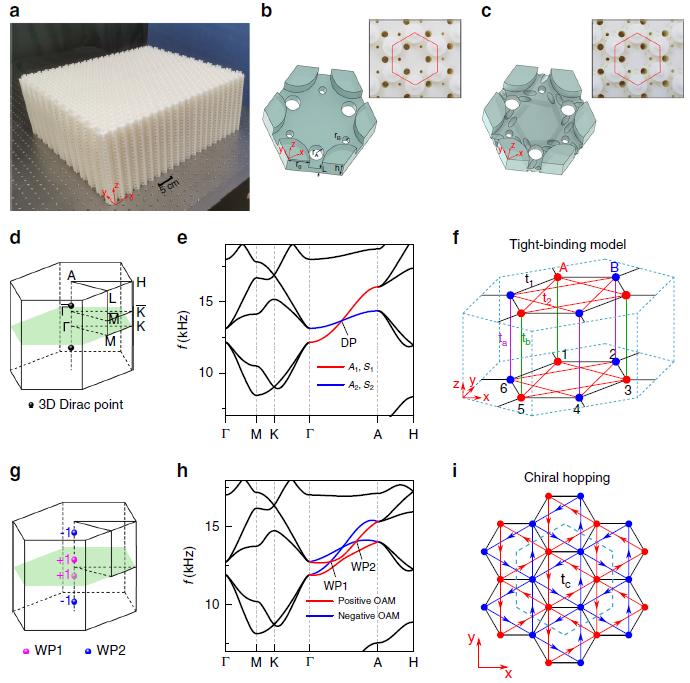 In a new paper published in Light Science & Application, a team of scientists, led by Professor Shuqi Chen from The Key Laboratory of Weak Light Nonlinear Photonics, School of Physics, Nankai University, China, and co-workers have achieved the theoretical and experimental realization of a pair of class I acoustic 3D Dirac points in a hexagonal sonic crystal and demonstrate how the exotic features of the surface states and interface states evolve in the transition towards Weyl points. The transition from two Dirac points to two pairs of Weyl points is realized by introducing chiral hopping into the Dirac sonic crystal. Correspondingly, the surface state dispersion evolves from connecting Dirac points to connecting Weyl points. Pseudospin-polarized helical states, which link the two Dirac points in momentum space, are created through particular interface design using sublattice pseudospin inversion.

The Dirac and Weyl sonic crystals were fabricated by 3D printing based on a layer-stacking strategy. Both the bulk and surface band structures are obtained, showing the topological feature in surface and interface states. The experiment results are consistent with the simulation results. These scientists summarize the principle results:

“We study the 3D Dirac sonic crystal for three purposes: (1) to realize a 3D Dirac point with band inversion in acoustics; (2) to realize the pseudospin-polarized interface states in acoustic semimetals; and (3) to experimentally study how the surface states act in the transition from Dirac points to Weyl points.”

“The helical states from 3D Dirac sonic crystal can be inherited by the Weyl sonic crystal, while more exotic interface states can arise with the chirality inversion.” they added.