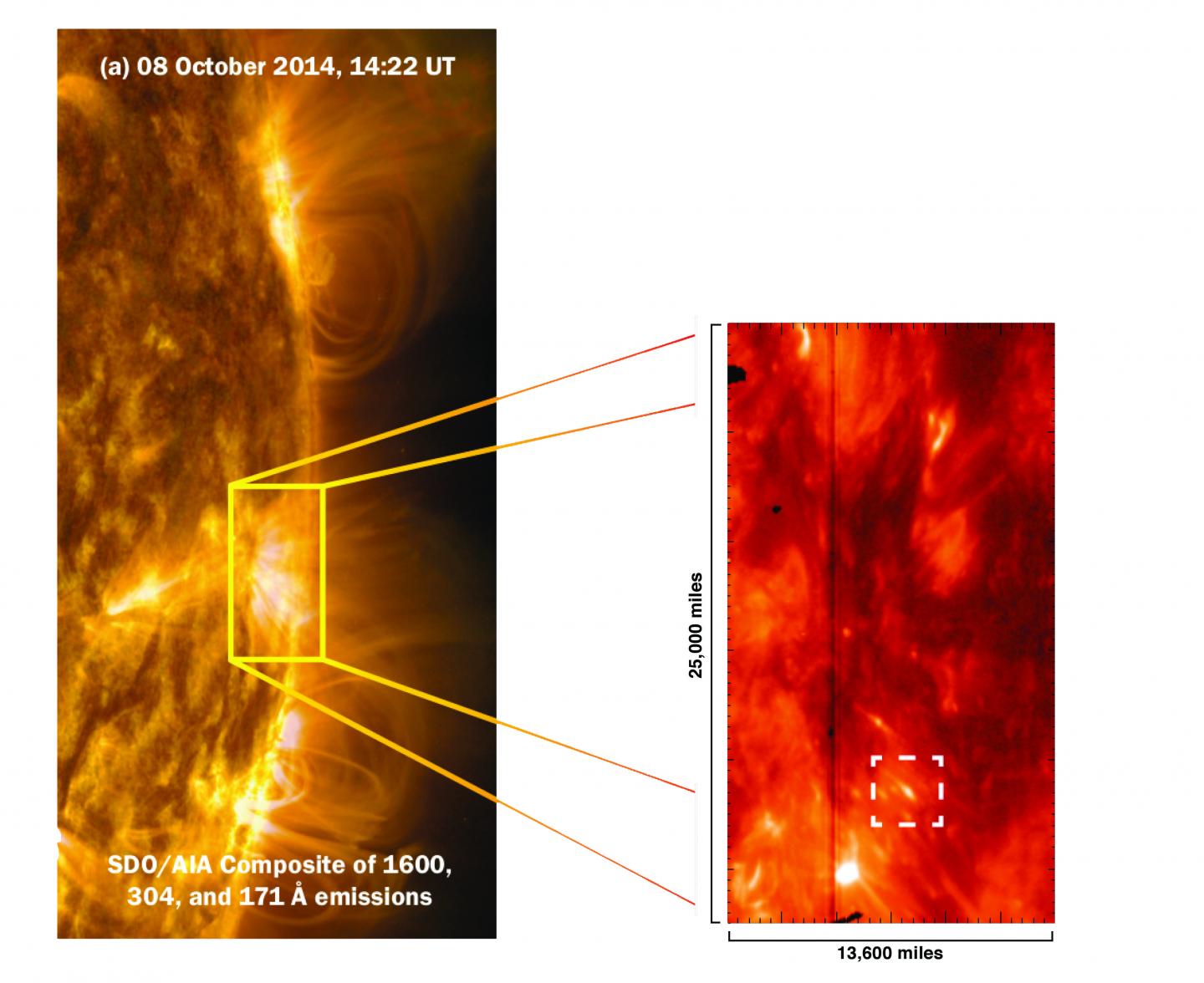 Scientists have discovered tadpole-shaped jets coming out of regions with intense magnetic fields on the Sun. Unlike those living on Earth, these “tadpoles” — formally called pseudo-shocks — are made entirely of plasma, the electrically conducting material made of charged particles that account for an estimated 99 percent of the observable universe. The discovery adds a new clue to one of the longest-standing mysteries in astrophysics.

For 150 years scientists have been trying to figure out why the wispy upper atmosphere of the Sun — the corona — is over 200 times hotter than the solar surface. This region, which extends millions of miles, somehow becomes superheated and continually releases highly charged particles, which race across the solar system at supersonic speeds.

When those particles encounter Earth, they have the potential to harm satellites and astronauts, disrupt telecommunications, and even interfere with power grids during particularly strong events. Understanding how the corona gets so hot can ultimately help us understand the fundamental physics behind what drives these disruptions.

In recent years, scientists have largely debated two possible explanations for coronal heating: nanoflares and electromagnetic waves. The nanoflare theory proposes bomb-like explosions, which release energy into the solar atmosphere. Siblings to the larger solar flares, they are expected to occur when magnetic field lines explosively reconnect, releasing a surge of hot, charged particles. An alternative theory suggests a type of electromagnetic wave called Alfvén waves might push charged particles into the atmosphere like an ocean wave pushing a surfer. Scientists now think the corona may be heated by a combination of phenomenon like these, instead of a single one alone.

The new discovery of pseudo-shocks adds another player to that debate. Particularly, it may contribute heat to the corona during specific times, namely when the Sun is active, such as during solar maximums — the most active part of the Sun’s 11-year cycle marked by an increase in sunspots, solar flares and coronal mass ejections.

The discovery of the solar tadpoles was somewhat fortuitous. When recently analyzing data from NASA’s Interface Region Imaging Spectrograph, or IRIS, scientists noticed unique elongated jets emerging from sunspots ¬– cool, magnetically-active regions on the Sun’s surface — and rising 3,000 miles up into the inner corona. The jets, with bulky heads and rarefied tails, looked to the scientists like tadpoles swimming up through the Sun’s layers.

“We were looking for waves and plasma ejecta, but instead, we noticed these dynamical pseudo-shocks, like disconnected plasma jets, that are not like real shocks but highly energetic to fulfill Sun’s radiative losses,” said Abhishek Srivastava, scientist at the Indian Institute of Technology (BHU) in Varanasi, India, and lead author on the new paper in Nature Astronomy.

Using computer simulations matching the events, they determined these pseudo-shocks could carry enough energy and plasma to heat the inner corona.

The scientists believe the pseudo-shocks are ejected by magnetic reconnection — an explosive tangling of magnetic field lines, which often occurs in and around sunspots. The pseudo-shocks have only been observed around the rims of sunspots so far, but scientists expect they’ll be found in other highly magnetized regions as well.

Over the past five years, IRIS has kept an eye on the Sun in its 10,000-plus orbits around Earth. It’s one of several in NASA’s Sun-staring fleet that have continually observed the Sun over the past two decades. Together, they are working to resolve the debate over coronal heating and solve other mysteries the Sun keeps.

“From the beginning, the IRIS science investigation has focused on combining high-resolution observations of the solar atmosphere with numerical simulations that capture essential physical processes,” said Bart De Pontieu research scientist at Lockheed Martin Solar & Astrophysics Laboratory in Palo Alto, California. “This paper is a nice illustration of how such a coordinated approach can lead to new physical insights into what drives the dynamics of the solar atmosphere.”

The newest member in NASA’s heliophysics fleet, Parker Solar Probe, may be able to provide some additional clues to the coronal heating mystery. Launched in 2018, the spacecraft flies through the solar corona to trace how energy and heat move through the region and to explore what accelerates the solar wind as well as solar energetic particles. Looking at phenomena far above the region where pseudo-shocks are found, Parker Solar Probe’s investigation hopes to shed light on other heating mechanisms, like nanoflares and electromagnetic waves. This work will complement the research conducted with IRIS.

“This new heating mechanism could be compared to the investigations that Parker Solar Probe will be doing,” said Aleida Higginson, deputy project scientist for Parker Solar Probe at Johns Hopkins University Applied Physics Laboratory in Laurel, Maryland. “Together they could provide a comprehensive picture of coronal heating.”