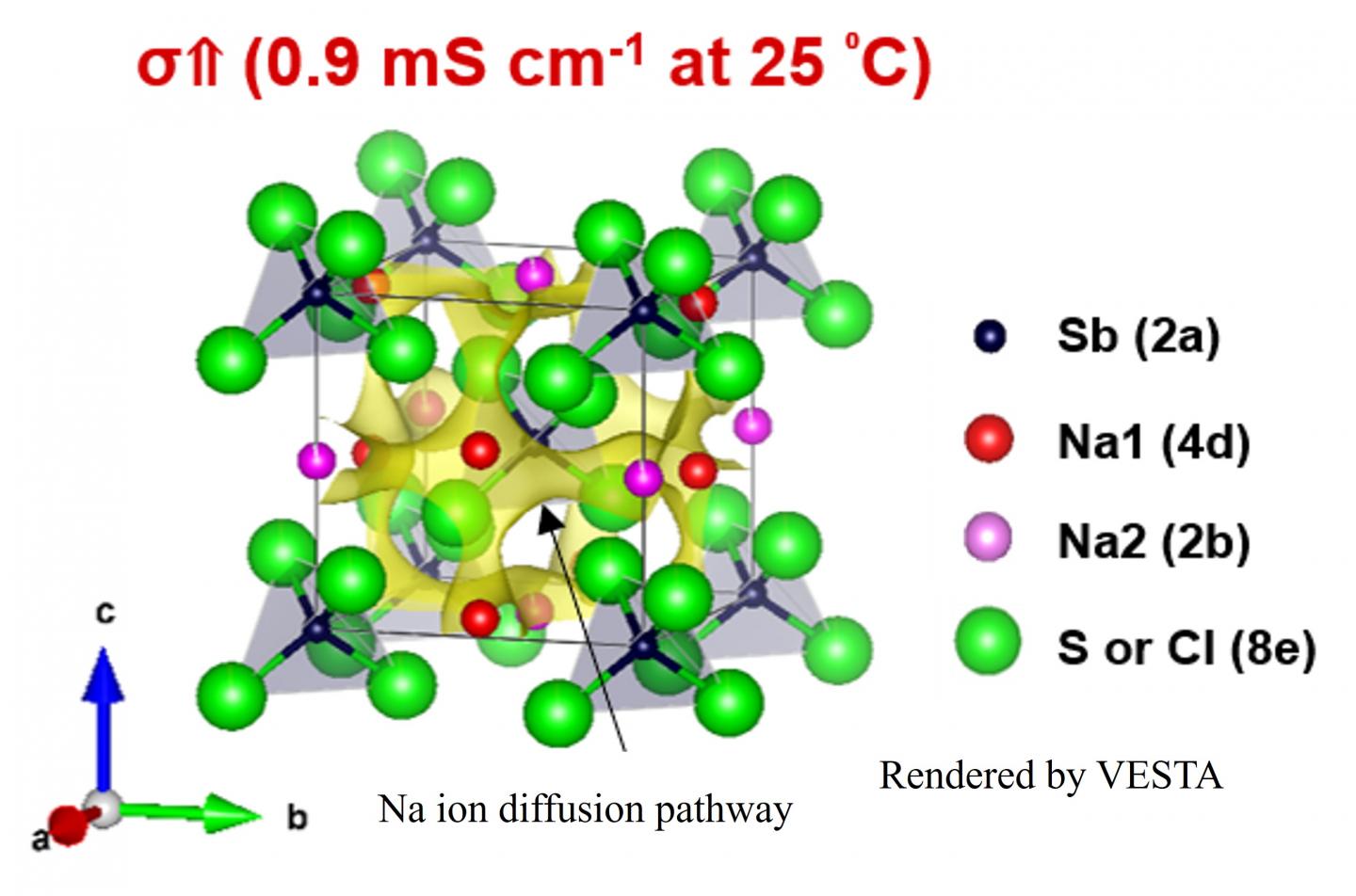 A research team from the Department of Electrical and Electronic Information Engineering at Toyohashi University of Technology developed a chlorine (Cl) substituted Na3SbS4 solid electrolyte for use in all-solid-state sodium (Na) ion batteries. Compared to the sample without a Cl substitution, the ionic conductivity of the Na3SbS4 solid electrolyte where sulfur (S) was partially substituted with Cl improved by up to three times. The team also demonstrated that the Cl-substituted Na3SbS4 has a crystal structure framework that allows Na ions to move easier in three dimensions, and they discovered that the Cl substitution showed superior stability with Na metal anodes.

Due to increases in demand for large-scale energy storage, research into all-solid-state sodium (Na) ion batteries using low-cost and abundantly available Na resources is accelerating. In order to use all-solid-state Na-ion batteries in practical applications, a solid electrolyte with high ionic conductivity at room temperature must be developed. Among various Na solid electrolytes, Na3SbS4 solid electrolytes have a high conductivity of 1 mS cm-1 or higher at room temperature and are therefore widely researched around the world. However, in order to achieve the high conductivity, post processing is required through ball milling, and achieving high ion conductivity through a simpler synthetic process has been notably problematic.

Therefore, the research group used a liquid-phase synthesis method suitable for mass production to develop a Cl-substituted Na3SbS4 solid electrolyte. By partially substituting S in the Na3SbS4 solid electrolyte with Cl, they increased ionic conductivity at room temperature by three times (0.9 mS cm-1) compared to the sample without substitution (0.3 mS cm-1). Also, they visualized the ion-conduction pathway in order to clarify the effect on conduction characteristics by the structural change that occurs due to the Cl substitution. As a result, they demonstrated that partially substituting S in Na3SbS4 with Cl resulted in loose local bonding of Na ions with S (or Cl), forming a crystal structure framework with a weak electrostatic interaction between Na and S (or Cl) and promoting ion diffusion particularly along the crystallographic c-axis. The increase in ionic conductivity by Cl substitution is caused by the formation of a crystal structure with a three-dimensional ion diffusion pathway.

Additionally, the team discovered that the Cl-substituted Na3SbS4 solid electrolytes showed superior stability with Na metal anodes compared to the sample without a Cl substitution. They demonstrated that this improvement in electrochemical stability was linked to a reduction in interfacial resistance between the anode and the solid electrolyte and that heavy Cl doping was effective in improving stability with the anode.

The research team uncovered an important design principle for developing an ideal solid electrolyte with desirable characteristics such as high ionic conductivity and superior electrochemical stability. They believe that the solid electrolyte from this research could be combined with liquid-phase coating technology to achieve a high storage capacity and stable cycling for all-solid-state Na-ion batteries.