By applying an algorithm akin to what Facebook uses to make friend suggestions, researchers have identified communities of ancient life in the fossil record and tracked how their numbers changed through each of the planet’s mass extinctions. 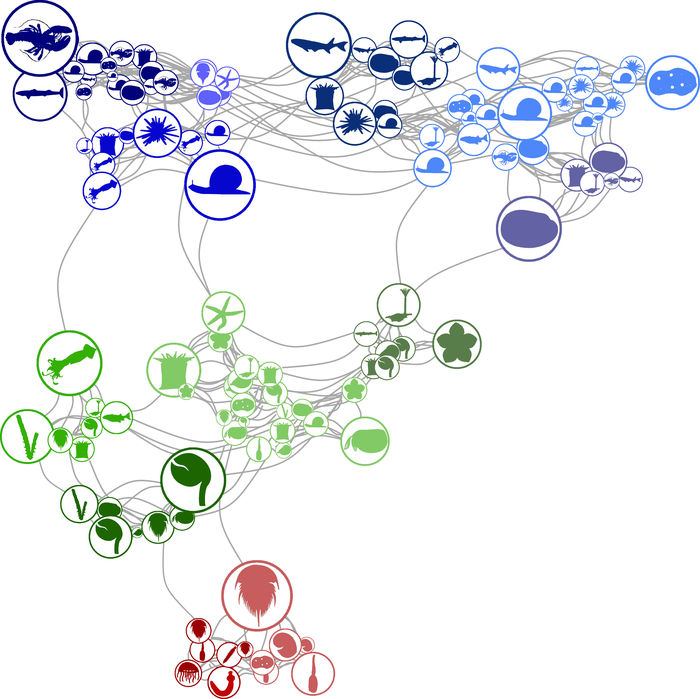 By applying an algorithm akin to what Facebook uses to make friend suggestions, researchers have identified communities of ancient life in the fossil record and tracked how their numbers changed through each of the planet’s mass extinctions.

“There have been times in our history where there have been major events that saw tremendous changes in communities, but very few species disappeared,” said lead author Drew Muscente, who conducted the study when he was a postdoctoral researcher at The University of Texas at Austin’s Jackson School of Geosciences. “And there have been events where many species had disappeared and communities and ecosystems were barely affected at all.”

Muscente is now an assistant professor at Cornell College. The study was recently published in the journal Geology.

The results underscore the importance of studying communities to get a broader perspective on environmental change – both in the past and in the present.

“We try to understand how changes in these communities lead to fundamental transformation of entire ecosystems,” said coauthor Rowan Martindale, an associate professor at the Jackson School.

Identifying communities in the fossil record is notoriously difficult. Most research on paleocommunities focuses on comparing samples and collections of fossils that have been taken from rocks of various ages and locations. And although conventional computational methods can be used to group samples into paleocommunities, they work best with relatively small datasets of only a few hundred or thousand fossil collections. Due to this limitation, the conventional methods can only be applied to data from specific regions and time periods, as opposed to the entire record.

The researchers were able to overcome these challenges and examine the entire fossil record by applying a community detection algorithm based on network analysis methods. Social media companies are known for using these sorts of methods to connect users, but they are becoming increasingly applied across a range of scientific disciplines.

According to Muscente, this study is the first time that network analysis has been applied to detect paleocommunities throughout the entire fossil record of marine animal life – from when animal life first appeared to the current geologic era.

Matthew Clapham, a paleobiology professor at the University of California Santa Cruz who was not involved with the study, said that another advantage of the network analysis method is the emphasis on visualizing connections, rather than just the types of animals present in an ecosystem.

“It brings the analysis closer to the way that the communities actually worked because communities and interactions between species are networks,” he said.

Drawing on a database of 124,605 collections of marine animal fossils from around the world, and representing 25,749 living and extinct animal groups, or genera, the algorithm identified more than 47 million links between these samples and organized them into 3,937 distinct paleocommunities.

The study tracked the communities and biodiversity over the past 541 million years. The research showed that while mass extinction events took a toll on both, the degree of decline sometimes differed.

Furthermore, the researchers did not find a link between the cause of an extinction and whether it took a great toll on communities or biodiversity.

The results indicate that the larger ecological impacts of extinction are more about which species are lost rather than the number of species lost. If an environment’s key players are preserved, communities can remain intact. But if too many of these players are removed, the community crumbles with it.

Muscente said he hopes that the network analysis methods first applied in this study can be improved and used to study modern ecosystems.

“I’d like to try and bridge the gap from the rock record to the present,” he said.

The study’s other coauthors include scientists at the Rensselaer Polytechnic Institute, the University of Idaho, the Carnegie Institution for Science and Harvard University.