Sniffing in the name of science 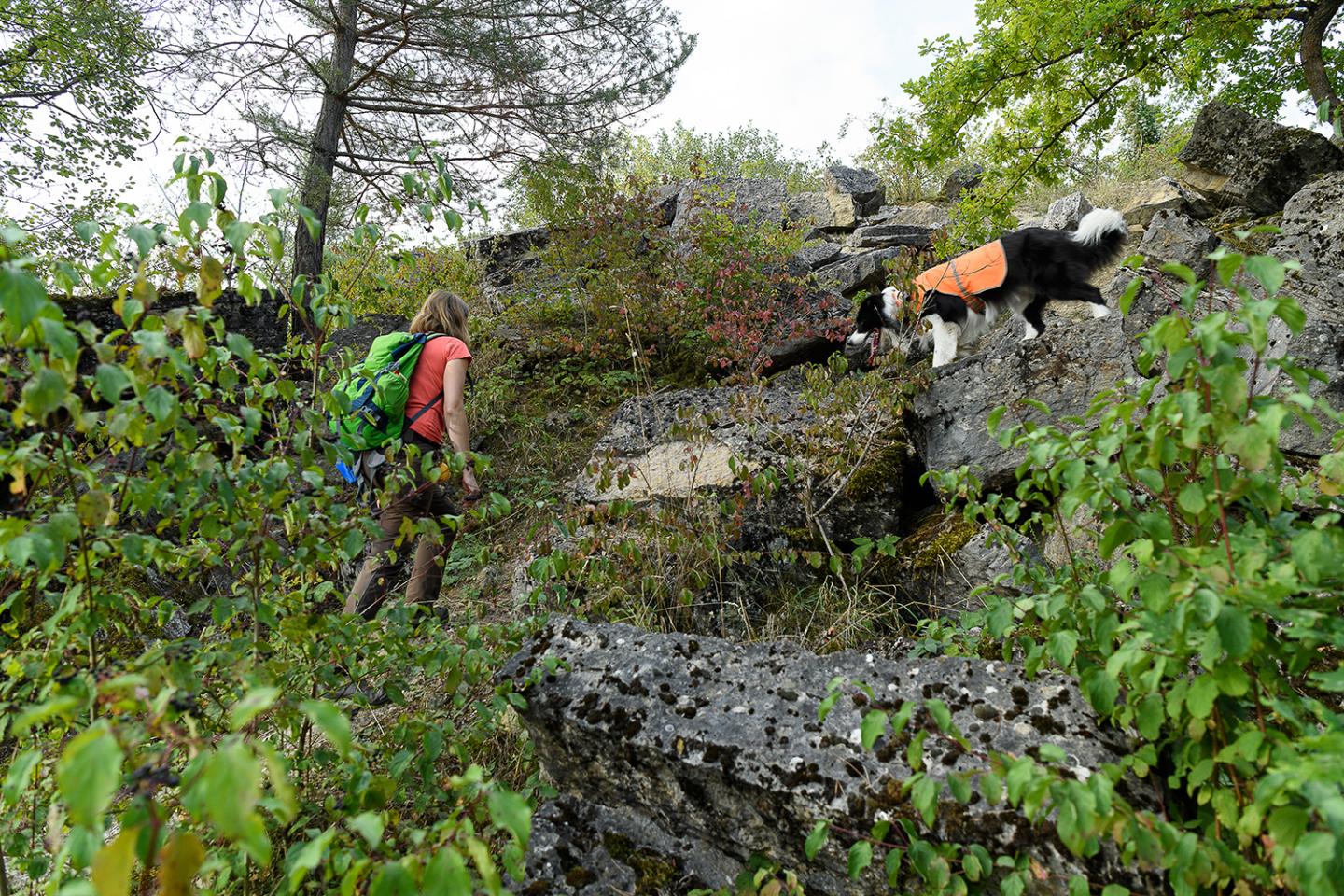 The lists of Earth’s endangered animals and plants are getting increasingly longer. But in order to stop this trend, we require more information. It is often difficult to find out exactly where the individual species can be found and how their populations are developing. According to a new overview study published in Methods in Ecology and Evolution by Dr Annegret Grimm-Seyfarth from the Helmholtz Centre for Environmental Research (UFZ) and her colleagues, specially trained detection dogs can be indispensable in such cases. With the help of these dogs, the species sought can usually be found faster and more effectively than with other methods.

How many otters are there still in Germany? What habitats do threatened crested newts use on land? And do urban hedgehogs have to deal with different problems than their rural conspecifics? Anyone wishing to effectively protect a species should be able to answer such questions. But this is by no means easy. Many animals remain in hiding – even their droppings can be difficult to find. Thus, it is often difficult to know exactly whether and at what rate their stocks are shrinking or where the remaining survivors are. “We urgently need to know more about these species”, says Dr Annegret Grimm-Seyfarth of the UFZ. “But first we must find them”.

Remote sensing with aerial and satellite images is useful for mapping open landscapes or detecting larger animals. But when it comes to densely overgrown areas and smaller, hidden species, experts often carry out the search themselves or work with cameras, hair traps, and similar tricks. Other techniques (e.g. analysing trace amounts of DNA) have also been attracting increasing interest worldwide. The use of specially trained detection dogs can also be particularly useful. After all, a dog’s sense of smell is virtually predestined to find the smallest traces of the target species. While humans have about six million olfactory receptors, a herding dog has more than 200 million – and a beagle even 300 million. This means that dogs can perceive an extremely wide range of odours, often in the tiniest concentrations. For example, they can easily find animal droppings in a forest or plants, mushrooms, and animals underground.

At the UFZ, the detection dogs have already proven their abilities in several research projects. “In order to be able to better assess their potential, we wanted to know how detection dogs have previously been used around the world”, says Grimm-Seyfarth. Together with UFZ employee Wiebke Harms and Dr Anne Berger from the Leibniz Institute for Zoo and Wildlife Research (IZW) in Berlin, she has evaluated 1220 publications documenting the use of such search dogs in more than 60 countries. “We were particularly interested in which breeds of dogs were used, which species they were supposed to track down, and how well they performed”, explains the researcher.

The longest experience with the detection dogs is in New Zealand, where dogs have been tracking threatened birds since around 1890. Since then, the idea has been implemented in many other regions, especially in North America and Europe. The studies analysed focused mainly on finding animals as well as their habitats and tracks. Dogs have been used to find more than 400 different animal species – most commonly mammals from the cat, dog, bear, and marten families. They have also been used to find birds and insects as well as 42 different plant species, 26 fungal species, and 6 bacterial species. These are not always endangered species. The dogs sometimes also sniff out pests such as bark beetles or invasive plants such as knotgrass and ragweed.

“In principle, you can train all dog breeds for such tasks”, says Grimm-Seyfarth. “But some of them may require more work than others”. Pinschers and Schnauzers, for example, are now more likely to be bred as companion dogs and are therefore less motivated to track down species. And terriers tend to immediately snatch their targets – which is, of course, not desirable.

Pointers and setters, on the other hand, have been specially bred to find and point out game – but not to hunt it. This is why these breeds are often used in research and conservation projects in North America, Great Britain, and Scandinavia in order to detect ground-breeding birds such as ptarmigans and wood grouse. Retrievers and herding dogs also have qualities that make them good at tracking species. They are eager to learn, easy to motivate, enjoy working with people, and generally do not have a strong hunting instinct. That is why Labrador Retrievers, Border Collies, and German Shepherds are among the most popular detection dogs worldwide.

Grimm-Seyfarth’s Border Collie Zammy, for example, learned as a puppy how to track down the droppings of otters. This is a valuable contribution to research because the droppings can be genetically analysed to find out which individual it comes from, how it is related to other conspecifics, and what it has eaten. However, even for experienced experts, these revealing traces are not so easy to find. Especially small and dark coloured droppings are easy to overlook. Dogs, on the other hand, sniff even the most unremarkable droppings without distinction. In an earlier UFZ study, they found four times as many droppings as human investigators alone. And the fact that Zammy is now also looking for crested newts makes his efforts even more rewarding.

According to the overview study, many other teams around the world have had similarly good experiences. In almost 90% of cases, the dogs worked much more effectively than other detection methods. Compared with camera traps, for example, they detected between 3.7 and 4.7 fold more black bears, pied martens, and bobcats. They are also often reach their destination particularly quickly. “They can find a single plant on a football field in a very short time”, says Grimm-Seyfarth. They are even able to discover underground parts of plants.

However, there are also cases where the use of detection dogs is not the method of choice. Rhinos, for example, leave their large piles of excrement clearly visible on paths so that humans can easily find them on their own. And animal species that know feral dogs as enemies are more likely to find (and fight) the detection dogs than to be found.

“However, in most cases where the dogs did not perform so well, poor training is to blame”, says Grimm-Seyfarth. She believes that good training of the animal is the most important recipe for success for detection dogs. “If you select the right dog, know enough about the target species, and design the study accordingly, this can be an excellent detection method”. She and her colleagues are already planning further applications for the useful detection dogs. A new project that involves tracking down invasive plant species will soon be launched.