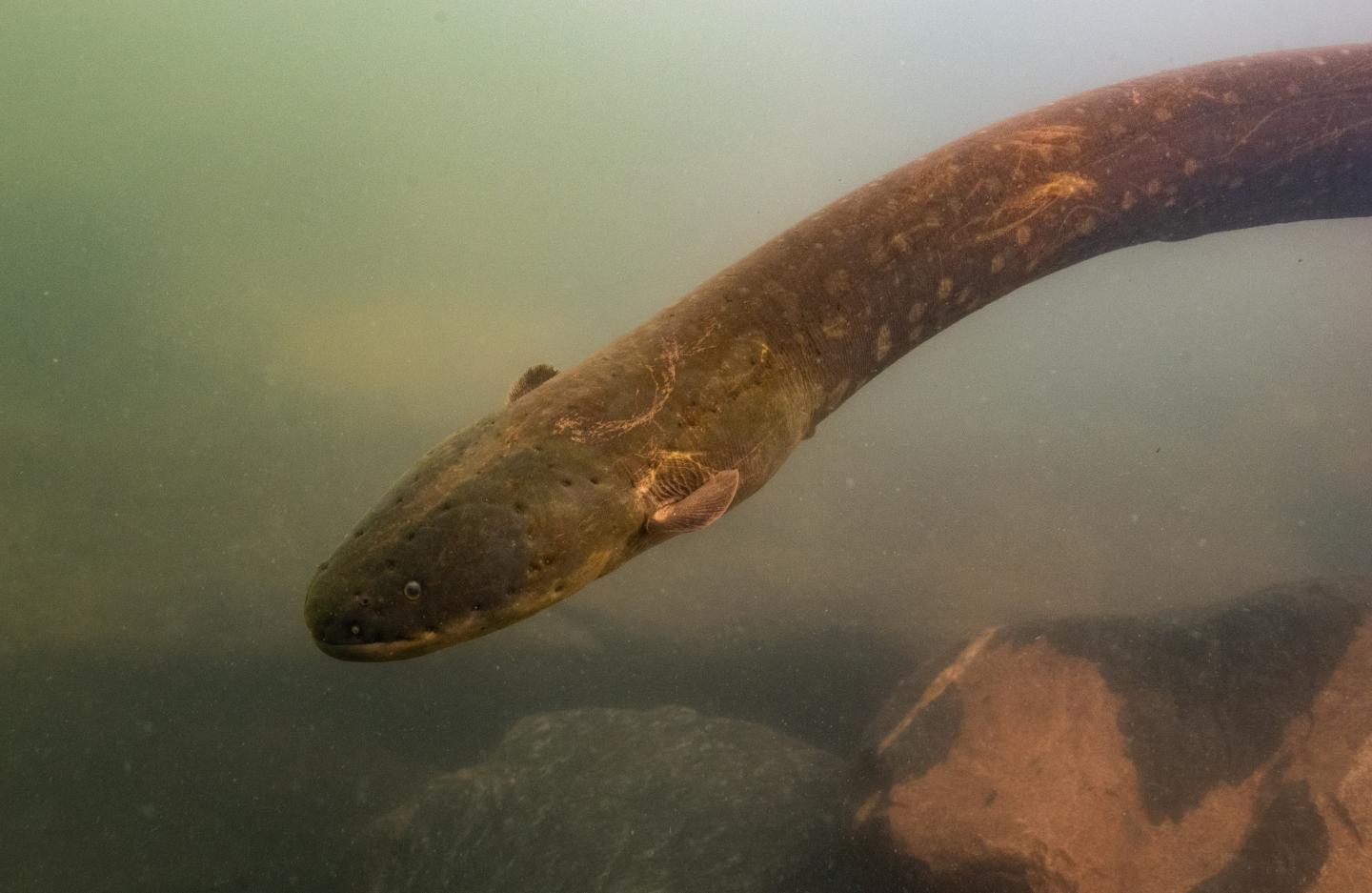 South American rivers are home to at least three different species of electric eels, including a newly identified species capable of generating a greater electrical discharge than any other known…
view more

South American rivers are home to at least three different species of electric eels, including a newly identified species capable of generating a greater electrical discharge than any other known animal, according to a new analysis of 107 fish collected in Brazil, French Guiana, Guyana and Suriname in recent years.

Scientists have known for more than 250 years that electric eels, which send electricity pulsing through the water to stun their prey, live in the Amazon basin. They are widely distributed in swamps, streams, creeks, and rivers across northern South America, and have long been thought to belong to a single species. With modern genetic and ecological analyses, however, researchers at the Smithsonian’s National Museum of Natural History have discovered that electric eels in the Amazon basin belong to three different species that evolved from a shared ancestor millions of years ago. The findings are reported Sept. 10 in the journal Nature Communications.

The identification of two new species of electric eel highlights how much remains to be discovered within the Amazon rainforest–one of Earth’s biodiversity hotspots–as well as the importance of protecting and preserving this threatened environment, says study leader C. David de Santana, a research associate in the museum’s division of fishes. “These fish grow to be seven to eight feet long. They’re really conspicuous,” he says. “If you can discover a new eight-foot-long fish after 250 years of scientific exploration, can you imagine what remains to be discovered in that region?”

About 250 species of electricity-generating fish are known to live in South America, although electric eels (which actually are fish with a superficial eel-like appearance) are the only ones that use their electricity to hunt and for self-defense. Like other electric fishes, they also navigate and communicate with the electricity they produce. Electric eels inspired the design of the first battery in 1799, and as researchers have learned more about how they generate enough electricity to stun a large animal, scientists and engineers have gained new ideas about how to improve technology and possibly even treat disease.

Smithsonian scientists have been collaborating with researchers at the University of São Paulo’s Museum of Zoology in Brazil and other institutions around the world to explore the diversity of the eels and other electric fishes in South America. As part of that effort, de Santana closely examined the electric eel specimens he and his colleagues had collected in the Amazon over the last six years.

All the specimens looked pretty much the same. Finding no external features on the fish that clearly distinguished different groups on first glance, de Santana turned to the animals’ DNA, and found genetic differences that indicated his 107 specimens represented three different species. Reexamining the animals with the genetic results in hand, he found subtle physical differences corresponding to the three genetic groups. He determined that each species has its own unique skull shape, as well as defining characteristics on the pectoral fin and a distinctive arrangement of pores on the body.

Each species has its own geographic distribution, too. The long recognized Electrophorus electricus, once thought to be widely distributed across the continent, actually appears to be confined to the highlands of the Guiana Shield, an ancient geological formation where clear waters tumble over rapids and falls. Electrophorus voltai, one of the two newly discovered species, primarily lives further south on the Brazilian Shield, a similar highland region. The third species, Electrophorus varii, named after the late Smithsonian ichthyologist Richard Vari, swims through murky, slow-flowing lowland waters.

Based on genetic comparisons, de Santana and colleagues determined that two groups of electric eels began to evolve in South America about 7.1 million years ago. One, the common ancestor of E. voltai and E. electricus, lived in the clear waters of the ancient highlands, whereas E. varii lived in the lowlands, whose murky waters were full of minerals and, consequently, conducted electricity more efficiently–an apparently important distinction for electric eels, whose discharge won’t travel as far in environments where conductivity is low.

According to the analysis, E. voltai and E. electricus diverged around 3.6 million years ago, around the time the Amazon River changed course, crossing the continent and traversing highland regions. Notably, de Santana’s team discovered that E. voltai can discharge up to 860 Volts of electricity–significantly more than the 650 Volts generated by E. electricus. This makes the species the strongest known bioelectric generator, and may be an adaptation to the lower conductivity of highland waters, he says.

De Santana says the previously overlooked diversity his team discovered is exciting since it creates new opportunities to investigate how animals generate high-voltage electricity by sequencing and comparing their genomes. Because the three species of electric eels diverged from one another so long ago, they may have evolved unique systems for electrogenesis, and, in the case of E. voltai,, this system is entirely unexplored. “It could really have different enzymes, different compounds that could be used in medicine or could inspire new technology,” he says.