Smarter drug release thanks to control over encapsulation 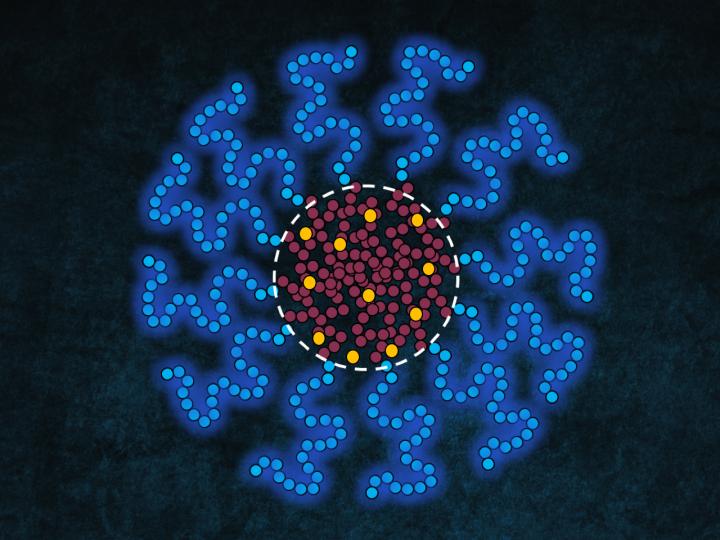 Researchers at Eindhoven University of Technology and Utrecht University have discovered the parameters that govern the encapsulation of drugs. This gives more control over the slow and steady release of drugs in patients. Moreover, designing encapsulations for new drugs will now require far less experimentation which makes for faster and cheaper drug development. The researchers believe this work will have a significant impact on the biomedical field and designing future drugs.

Many drugs are hydrophobic–they do not dissolve well in water–which makes drug delivery in patients problematic. One possible solution is to encapsulate the drugs in small packages that are hydrophobic (water-repellent) on the inside and hydrophilic (water-soluble) on the outside. The drugs will accumulate in the inside of these packages and the transportation of the drug throughout the patient’s body becomes much easier. The packages often consist of associated surfactants, which are pharma-approved. When dissolved in water, a physiological solution, or blood, these molecules orient their hydrophobic part towards the inside core (with affinity for the insoluble drugs) and their hydrophilic side towards the outside, forming a spherical ‘package’, called a micelle.

The whereabouts in a micelle

Transporting drugs throughout the body in this way has been possible for decades, but only now researchers understand which factors exactly dictate where the drugs inside the micelle gather. This spatial distribution can dramatically affect the release rate of the drugs inside a patient. Some drugs concentrate at the center of the hydrophobic core of the micelle and release slowly, which is desirable for the drug uptake of a patient. Other drugs gather at the core-shell interface of the micelle and release typically fast. Therefore, controlling the location of the drugs in the micelle encapsulation controls the release rate of the drugs.

Using a dye to track drug

To investigate where insoluble drugs gather, the researchers used Nile Red, a dye molecule that resembles the size and solubility of typical drugs. The dye has a very clever property: not only does it absorb a specific color of light, but also that color depends on its environment. If the dye is dissolved in pure water, it absorbs light of a different color than if is there is also some alcohol dissolved in the water. Changing the water/alcohol ratio is a clever way to simulate a good solvent or a poor solvent for the dye. This is analogous to working with a water soluble drug or an insoluble drug. By measuring the light absorption, the researchers could determine how much dye gathered at the core of the micelle and how much at the core-shell interface.

To confirm their findings, the researchers did computer simulations to determine the locations of the dissolved drugs and the shape of the block copolymer micelle. The computations reveal the arrangement of the components inside and outside the micelle, enabling to assess the preferred regions of the drug.

Today’s drug encapsulation research is dominated by trail-and-error experimentation. The results reported in this study enable easier and cheaper development of smart drugs. This will help reduce side effects associated with therapy and facilitate the creation of personalized therapeutic treatments where the release of the drug is adjusted to the individual needs of the patient.

Scalable algorithms for many applications

How do you cultivate a healthy plant microbiome?