Smallest pixels ever created could light up color-changing buildings 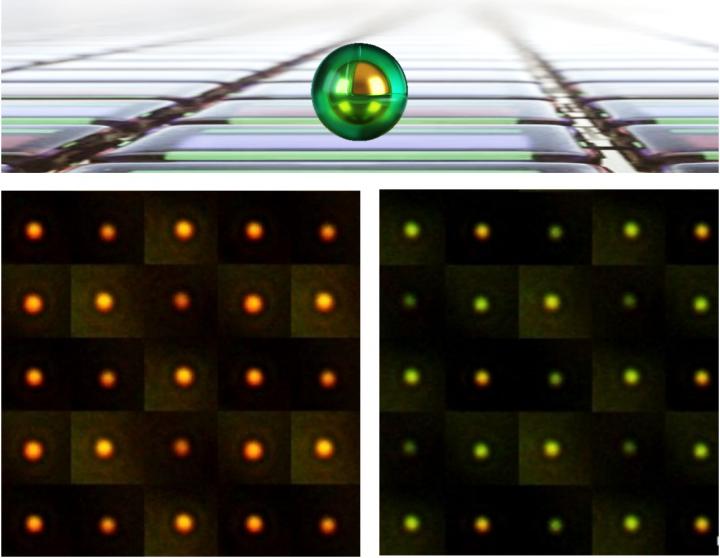 The smallest pixels yet created – a million times smaller than those in smartphones, made by trapping particles of light under tiny rocks of gold – could be used for new types of large-scale flexible displays, big enough to cover entire buildings.

The colour pixels, developed by a team of scientists led by the University of Cambridge, are compatible with roll-to-roll fabrication on flexible plastic films, dramatically reducing their production cost. The results are reported in the journal Science Advances.

It has been a long-held dream to mimic the colour-changing skin of octopus or squid, allowing people or objects to disappear into the natural background, but making large-area flexible display screens is still prohibitively expensive because they are constructed from highly precise multiple layers.

At the centre of the pixels developed by the Cambridge scientists is a tiny particle of gold a few billionths of a metre across. The grain sits on top of a reflective surface, trapping light in the gap in between. Surrounding each grain is a thin sticky coating which changes chemically when electrically switched, causing the pixel to change colour across the spectrum.

The team of scientists, from different disciplines including physics, chemistry and manufacturing, made the pixels by coating vats of golden grains with an active polymer called polyaniline and then spraying them onto flexible mirror-coated plastic, to dramatically drive down production cost.

The pixels are the smallest yet created, a million times smaller than typical smartphone pixels. They can be seen in bright sunlight and because they do not need constant power to keep their set colour, have an energy performance that make large areas feasible and sustainable. “We started by washing them over aluminized food packets, but then found aerosol spraying is faster,” said co-lead author Hyeon-Ho Jeong from Cambridge’s Cavendish Laboratory.

“These are not the normal tools of nanotechnology, but this sort of radical approach is needed to make sustainable technologies feasible,” said Professor Jeremy J Baumberg of the NanoPhotonics Centre at Cambridge’s Cavendish Laboratory, who led the research. “The strange physics of light on the nanoscale allows it to be switched, even if less than a tenth of the film is coated with our active pixels. That’s because the apparent size of each pixel for light is many times larger than their physical area when using these resonant gold architectures.”

The pixels could enable a host of new application possibilities such as building-sized display screens, architecture which can switch off solar heat load, active camouflage clothing and coatings, as well as tiny indicators for coming internet-of-things devices.

The team are currently working at improving the colour range and are looking for partners to develop the technology further.

The research is funded as part of a UK Engineering and Physical Sciences Research Council (EPSRC) investment in the Cambridge NanoPhotonics Centre, as well as the European Research Council (ERC) and the China Scholarship Council.

A case of the chimp sniffles or major outbreak? Syndromic surveillance may hold the key

Scienmag Jan 24, 2019
Study by the University of Bonn: High-tech surfaces could greatly reduce drag and CO2 emissions of shipsCredit: ©…

Mutation discovery leads to precise treatment for child with severe…