The declining body size of North Atlantic right whales may have critical consequences for the future of the species. New research shows that smaller females produce fewer calves. 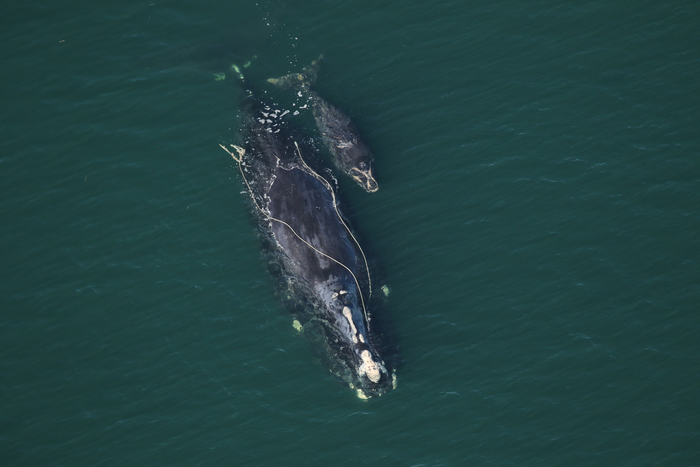 The declining body size of North Atlantic right whales may have critical consequences for the future of the species. New research shows that smaller females produce fewer calves.

Earlier research showed that North Atlantic right whales are declining in size, in part due to frequent entanglements in fishing gear. The new findings suggest that reducing the impacts of such sub-lethal stresses could help the population to grow.

“Smaller females appear to have less capacity to raise calves as frequently as larger whales,” said Joshua Stewart, a research biologist with NOAA Fisheries’ Southwest Fisheries Science Center, who collaborated with other researchers from Oregon State University, Woods Hole Oceanographic Institution, the New England Aquarium, and SR3 on the findings. “Their smaller size means they may take longer to recover from the energetic cost of giving birth, especially in light of other stresses on the population.”

The research underscores the importance of expanding and enforcing protections under the Marine Mammal Protection Act and Endangered Species Act. NOAA Fisheries has designated North Atlantic right whales one of its Species in the Spotlight, in need of focused recovery actions.

Scientists took body measurements from high-resolution aerial photographs, collected over two decades, using airplanes and drones to track the sizes of North Atlantic right whales. “We were able to measure whales by flying a camera high above them, essentially giving them a health check without them knowing we were there,” said John Durban, a co-author formerly at the Southwest Fisheries Science Center and now at Oregon State University.

Scientists examined the aerial photos of 41 female North Atlantic right whales taken from 2000 to 2019, comparing their sizes with their reproductive histories. The relationship showed that smaller whales produced fewer offspring per reproductive year. The birth rate of the population, which now numbers less than 350 animals, is already at a 40-year low.

The size of the mother is important for baleen whale reproduction. Larger maternal size and good condition are associated with larger and more robust calves. The new study found that larger female North Atlantic right whales also appear to have more young over the course of their reproductive years. This suggests that declining body sizes are a potential contributor to low birth rates over the past decade, which may limit the population’s ability to recover.

“After decades of research on this species, we have learned about the stressors right whales face and, with this study, have gained further insights into how these stressors are affecting their reproduction,” said Amy Knowlton, Senior Scientist in the New England Aquarium’s Right Whale Research Program and coauthor of the study. “The remedies to address these threats are clear: shifting how humans operate in the ocean so that they do not inadvertently harm whales. That means adapting to weaker ropes used for fishing and ultimately ropeless fishing gear as well as broader areas of vessel speed restrictions in the right whale’s range. With these changes, we could reverse the decline we are witnessing in this species.”

The New England Aquarium curates the North Atlantic Right Whale Catalog and monitors human impacts and their effects on the health of the whales using more than a million photographs. Such high-resolution information is rare for marine species and these detailed databases, maintained since the 1980s, were essential to this study.

Other hard-to-observe factors undoubtedly also influence reproduction and fecundity in North Atlantic right whales beyond female body length. These include:

“Sublethal stressors such as acoustic, vessel, and entanglement trauma, drain energy acquired by feeding, diverting it from calf productivity,” said Michael Moore, Senior Scientist at the Woods Hole Oceanographic Institution, and a co-author of the study.

“By identifying potential mechanisms that are contributing to their reduced birth rates, we can highlight tangible opportunities for interventions,” said Stewart. “Doing everything we can to relieve pressure on the population and help support their recovery and resiliency will become increasingly important in the face of a rapidly changing ocean.”