Small streams in agricultural ecosystems are heavily polluted with pesticides

The environmental risks of pesticides need to be revised 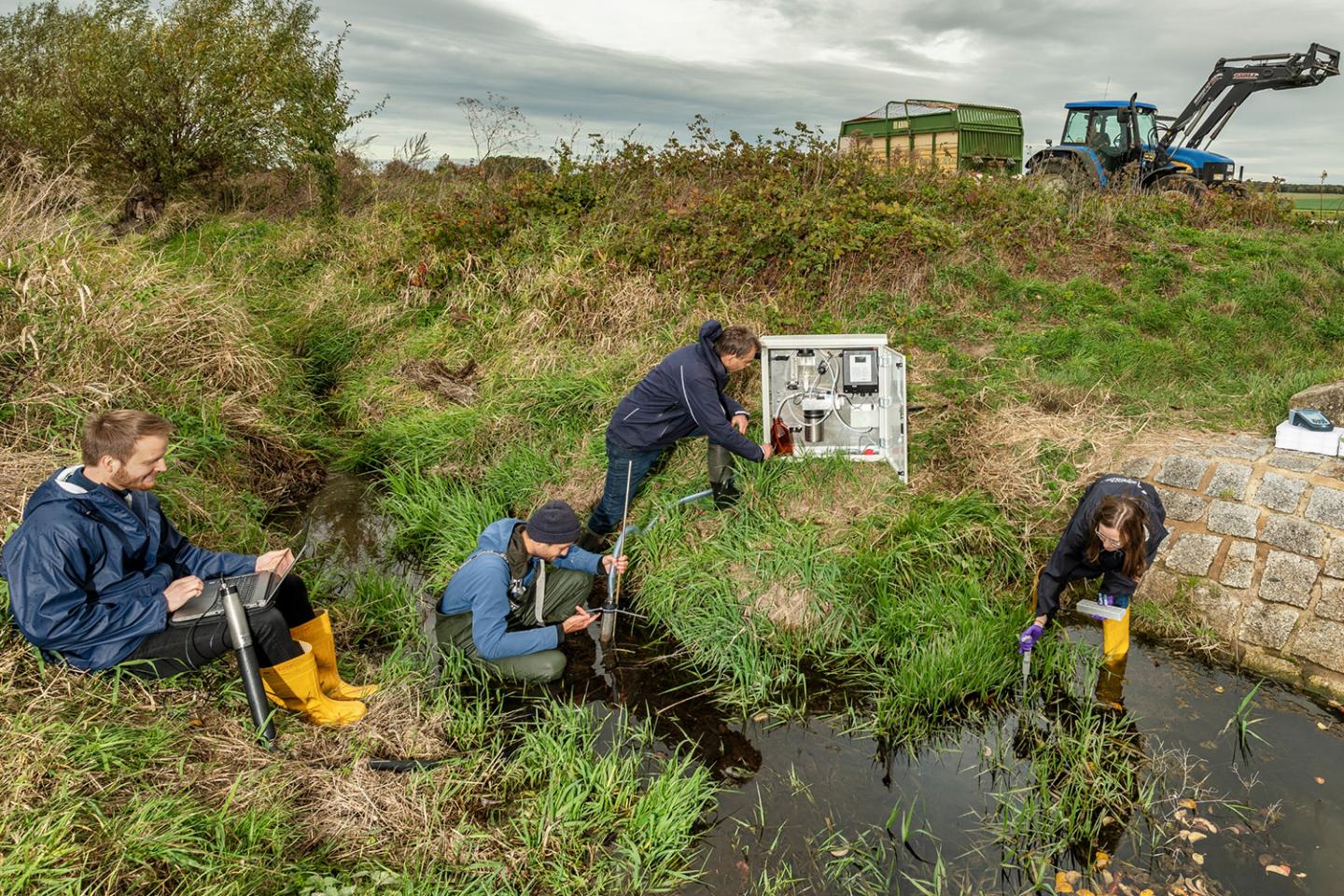 Pesticides safeguard agricultural yields by controlling harmful insects, fungi, and weeds. However, they also enter neighbouring streams and damage the aquatic communities, which are crucial for maintaining biodiversity, are part of the food web and support the self-purification of water. In a nationwide monitoring programme, a consortium of scientists led by the Helmholtz Centre for Environmental Research (UFZ) has shown that the governmental thresholds for pesticides are generally too high and that even these excessively high levels are still exceeded in over 80% of water bodies. As they published in the scientific journal Water Research the loss of biodiversity can only be halted if the environmental risk assessment of pesticides is radically revised.

For two years, the researchers studied pesticide contamination at more than 100 monitoring sites on streams flowing through predominantly agricultural lowland regions in 12 federal states in Germany. They found significant exceedances of the RAC value – the concentration of an active ingredient specified in the official approval procedure for a pesticide, which should not be exceeded in the water body in order to prevent negative effects on aquatic organisms. In most of the small streams investigated, the RAC values were exceeded (81%). In 18% of the streams, such exceedances were detected for more than 10 pesticides. “We have detected a significantly higher pesticide load in small water bodies than we originally expected”, says Prof. Matthias Liess, ecotoxicologist at the UFZ and coordinator of the small water monitoring project. For example, in three water bodies, the insecticide thiacloprid exceeded the RAC value by more than 100-fold. In 27 streams the insecticides clothianidin, methiocarb, and fipronil as well as herbicides such as terbuthylazine, nicosulfuron, and lenacil exceeded the RAC value 10- to 100-fold.

Because of the extensive data set, the researchers were able to reveal that pesticides affect aquatic invertebrate communities at much lower concentrations than previously assumed by the pesticide risk assessment. The concentrations depend on which species are to be conserved. For example, sensitive insect species such as caddisflies and dragonflies require much lower (1.000-fold) threshold values than snails and worms. “For sensitive insect species, the pesticide concentration in the small lowland streams is the most relevant factor that determines their survival. In contrast, other environmental problems such as watercourse expansion, oxygen deficiency, and excessive nutrient content are less important. For the first time this study allows a ranking of environmental problems”, says Liess.

For the current approval of pesticides, the high sensitivity of species in the ecosystem context is grossly underestimated. Until now, the ecological risk of pesticides in the field has been predicted based on laboratory studies, artificial ecosystems, and simulation models. However, according to Liess, the results from the laboratory do not reflect reality. “In addition to pesticides, many other stressors act on organisms in the ecosystem. These make them much more sensitive to pesticides. Natural stressors such as predation pressure or competition between species are not sufficiently taken into account in the risk assessment. But these obvious problems often go unnoticed because the degree of pesticide contamination and the effect of this have not been validated in the field – neither in Germany nor in other countries”, he says.

In the course of the project, the scientists also found that the type of sampling has a drastic influence on the concentrations of pesticides measured. In addition to the scoop sample specified as standard by the EU Water Framework Directive, they also took an “event sample”. Here, an automatically controlled sampler takes water samples from the water body after a rain event. “The event sample provides much more realistic results because the pesticides enter the water bodies as a result of the increased surface run-off from the field, especially during rain”, says Liess. Compared to the scoop samples, the event-related samples show a 10-fold higher pesticide load. “In order to realistically depict the water pollution, samples must therefore be taken after rainfall events. That’s why we need an official regular environmental monitoring to be able to assess the amount and the effects of pesticides,” says Matthias Liess. He and his colleagues also demand that new scientific findings be incorporated into the approval process for new pesticides more quickly. “We are still using pesticides that were approved many years ago based on an outdated risk assessment. This must therefore change as soon as possible. Only in this way can we preserve the biodiversity in our waters and with it the services that these biotic communities provide for our ecosystems.”