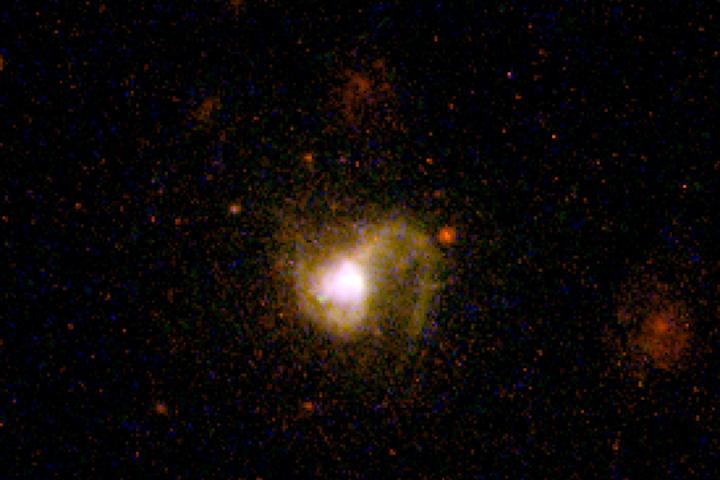 A new study led by University of Minnesota astrophysicists shows that high-energy light from small galaxies may have played a key role in the early evolution of the Universe. The research gives insight into how the Universe became reionized, a problem that astronomers have been trying to solve for years.

The research is published in The Astrophysical Journal, a peer-reviewed scientific journal of astrophysics and astronomy.

After the Big Bang, when the Universe was formed billions of years ago, it was in an ionized state. This means that the electrons and protons floated freely throughout space. As the Universe expanded and started cooling down, it changed to a neutral state when the protons and electrons combined into atoms, akin to water vapor condensing into a cloud.

Now however, scientists have observed that the Universe is back in an ionized state. A major endeavor in astronomy is figuring out how this happened. Astronomers have theorized that the energy for reionization must have come from galaxies themselves. But, it’s incredibly hard for enough high energy light to escape a galaxy due to hydrogen clouds within it that absorb the light, much like clouds in the Earth’s atmosphere absorb sunlight on an overcast day.

Astrophysicists from the Minnesota Institute for Astrophysics in the University of Minnesota’s College of Science and Engineering may have found the answer to that problem. Using data from the Gemini telescope, the researchers have observed the first ever galaxy in a “blow-away” state, meaning that the hydrogen clouds have been removed, allowing the high energy light to escape. The scientists suspect that the blow-away was caused by many supernovas, or dying stars, exploding in a short period of time.

The galaxy, named Pox 186, is so small that it could fit inside the Milky Way. The researchers suspect that its compact size, coupled with its large population of stars–which amount to a hundred thousand times the mass of the sun–made the blow-away possible.

The findings confirm that a blow-away is possible, furthering the idea that small galaxies were primarily responsible for the reionization of the Universe and giving more insight into how the Universe became what it is today.

“There are a lot of scenarios in science where you theorize that something should be the case, and you don’t actually find it,” Eggen said. “So, getting the observational confirmation that this sort of thing can happen is really important. If this one scenario is possible, then that means that there are other galaxies that also existed in blow-away states in the past. Understanding the consequences of this blow-away gives direct insight into the impacts similar blow-aways would have had during the process of reionization.”

In addition to Eggen, the research team included Claudia Scarlata and Evan Skillman, both professors in the School of Physics and Astronomy at the University of Minnesota, and Anne Jaskot, an assistant professor of astronomy at Williams College.

The research was funded by grants from the University of Minnesota and NASA. Researchers made use of the NASA/IPAC Extragalactic Database (NED) and NASA’s Astrophysical Data System.