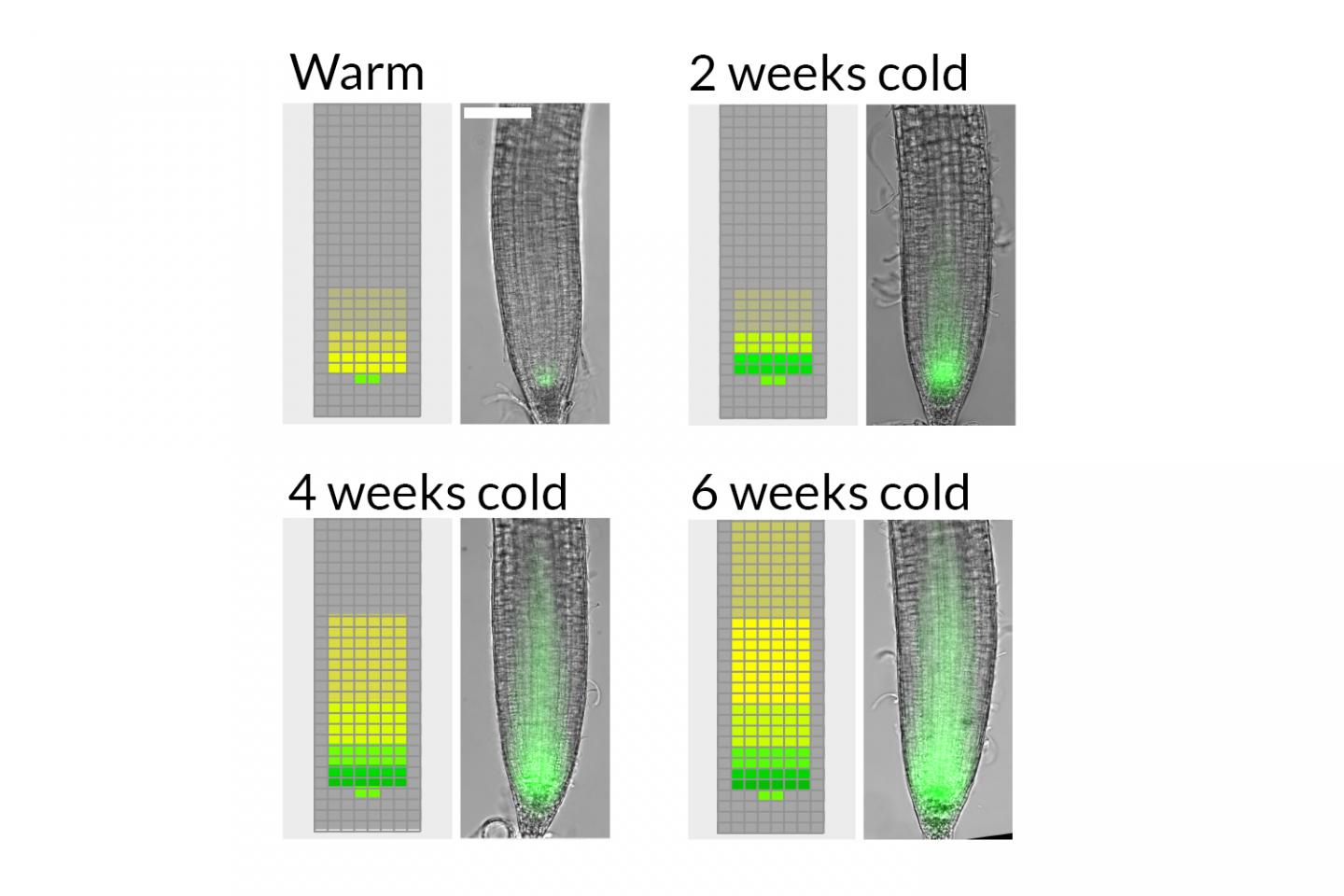 Plants have to interpret temperature fluctuations over timescales ranging from hours to months to align their growth and development with the seasons.

Much is known about how plants respond to temperature but the mechanisms that allow them to measure the temperature signal are less well understood.

In this study which appears in Nature, researchers Yusheng Zhao and Rea Antoniou-Kourounioti in the groups of Professor Dame Caroline Dean and Professor Martin Howard at John Innes Centre show that slow growth is used as a signal to sense long-term changes in temperature.

“We have found a new temperature sensing mechanism that holds a long-term memory of the cold, integrating over fluctuating temperatures to measure cold duration. This is a new type of physical mechanism for temperature-sensing and can guide further studies in this area” explains first author Dr Yusheng Zhao.

Using a forward genetic screen – looking at the genetics of plants showing a particular trait – they found a dysfunctional response. These plants showed high levels of a protein called VIN3 in warm temperatures. This protein is well known as being upregulated during periods of cold and interacts with the epigenetic molecular memory system that allows plants to remember cold.

Dr Yusheng Zhao found these plants had one of two versions of mutated NTL8, a transcription factor or regulator protein that activated VIN3 even without cold.

To understand the role of NTL8 they tagged it with a fluorescent protein (GFP) and looked with help from the Bioimaging platform at the John Innes Centre to show where this protein is present compared to VIN3. This showed that the mutated version was found everywhere in the plant and the wild type protein was mostly observed in the growing tips of roots. It also showed that it accumulates slowly over time in the cold.

Using a theoretical approach to explore the problem further, the team reasoned that understanding how fast the NTL8 protein degrades may offer insight into how the slow dynamics of NTL8 and VIN3 operate. They discovered the NTL8 protein is long-lasting, as predicted by the theory.

Mathematical modelling showed that the main factor determining the amount of NTL8 protein is growth dependent dilution. If the weather gets warmer, the plants grow quicker and as cells multiply, the amount of NTL8 becomes diluted. In contrast, in cooler temperatures plants grow more slowly and NTL8 is more concentrated, being able to accumulate over time. The mathematical model can reproduce the observations of NTL8 protein levels seen in the warm and cold.

To further test the model, they added chemicals and hormones to change plant growth to see if this changed the levels of NTL8 as predicted by the model, which it did. In the roots they added the plant growth hormone Gibberellin, which causes plants to grow faster and NTL8 levels were lower, as expected. When they added an inhibitor of growth, NTL8 protein levels were higher in the whole plant. The team did similar experiments on the roots, and these predictions were confirmed too.

Dr Rea Antoniou-Kourounioti joint first author adds: “We were surprised by the simplicity of the new temperature mechanism we discovered, which recycles temperature information from one process [growth] to create a completely new temperature sensing mechanism for another [vernalization – the acceleration of flowering by cold]. We could reproduce most of the temperature-dependent changes in our experimental observations with our model by just changing the growth rate between warm and cold.”

“This study revolutionises our understanding of how temperature is sensed by plants, and particularly how fluctuating long-term environmental conditions are integrated,” says Professor Martin Howard.

“This study shows the fantastic synergy when experimental approaches are combined with computational modelling. We would never have figured out this mechanism by doing either separately,” says Caroline Dean.

The findings will be useful for understanding how plants as well as other organisms sense the long-term fluctuating environmental signals and could apply to crops.