The Sloan Research Fellowships, awarded annually since 1955, honor early-career scientists and scholars whose achievements and potential identify them as rising stars and the next generation of scientific leaders. Fellows receive $55,000 to further their research. 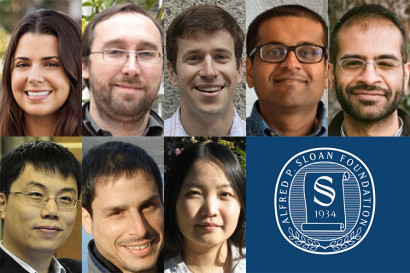 Gloria Brar, an assistant professor of molecular and cell biology, who studies the genes that regulate meiosis;

Hernan Garcia, an assistant professor of molecular and cell biology and of physics, who researches the chemical signals that orchestrate the development of a single cell into a multicellular organism;

Evan Miller, the Cupola Era Professor in the College of Chemistry and an assistant professor of molecular and cell biology, who applies synthetic chemistry to the field of neuroscience;

Surjeet Rajendran, the Henry Shenker assistant professor of physics, a theoretical physicist in search of new theories to explain dark matter and other cosmological mysteries;

Nikhil Srivastava, an assistant professor of mathematics, who focuses on theoretical computer science;

Ke Xu, an assistant professor and the Chevron Professor of Chemistry, who studies cell biology on the nanoscale;

Nir Yosef, an assistant professor of electrical engineering and computer sciences and a member of the Center for Computational Biology, who uses computational genomics to understand gene regulation; and

Wenjun Zhang, an assistant professor of chemical and biomolecular engineering, who seeks to understand and engineer the biosynthesis of natural products for applications related to human health and bioenergy.

“Getting early-career support can be a make-or-break moment for a young scholar,” said Paul Joskow, president of the foundation, in a statement. “In an increasingly competitive academic environment, it can be difficult to stand out, even when your work is first-rate. The Sloan Research Fellowships have become an unmistakable marker of quality among researchers. Fellows represent the best of the best among young scientists.”

The 2016 fellows are drawn from 52 colleges and universities in the United States and Canada, and are awarded in eight scientific and technical fields: chemistry, computer science, economics, mathematics, computational and evolutionary molecular biology, neuroscience, ocean sciences and physics. A complete list of the new fellows is on the Sloan Foundation website (PDF).

The foundation is a philanthropic, not-for-profit grant-making institution based in New York. It was established in 1934 by Alfred Pritchard Sloan Jr., then president and chief executive officer of the General Motors Corporation.