Plants can be night owls, too (and get old!) 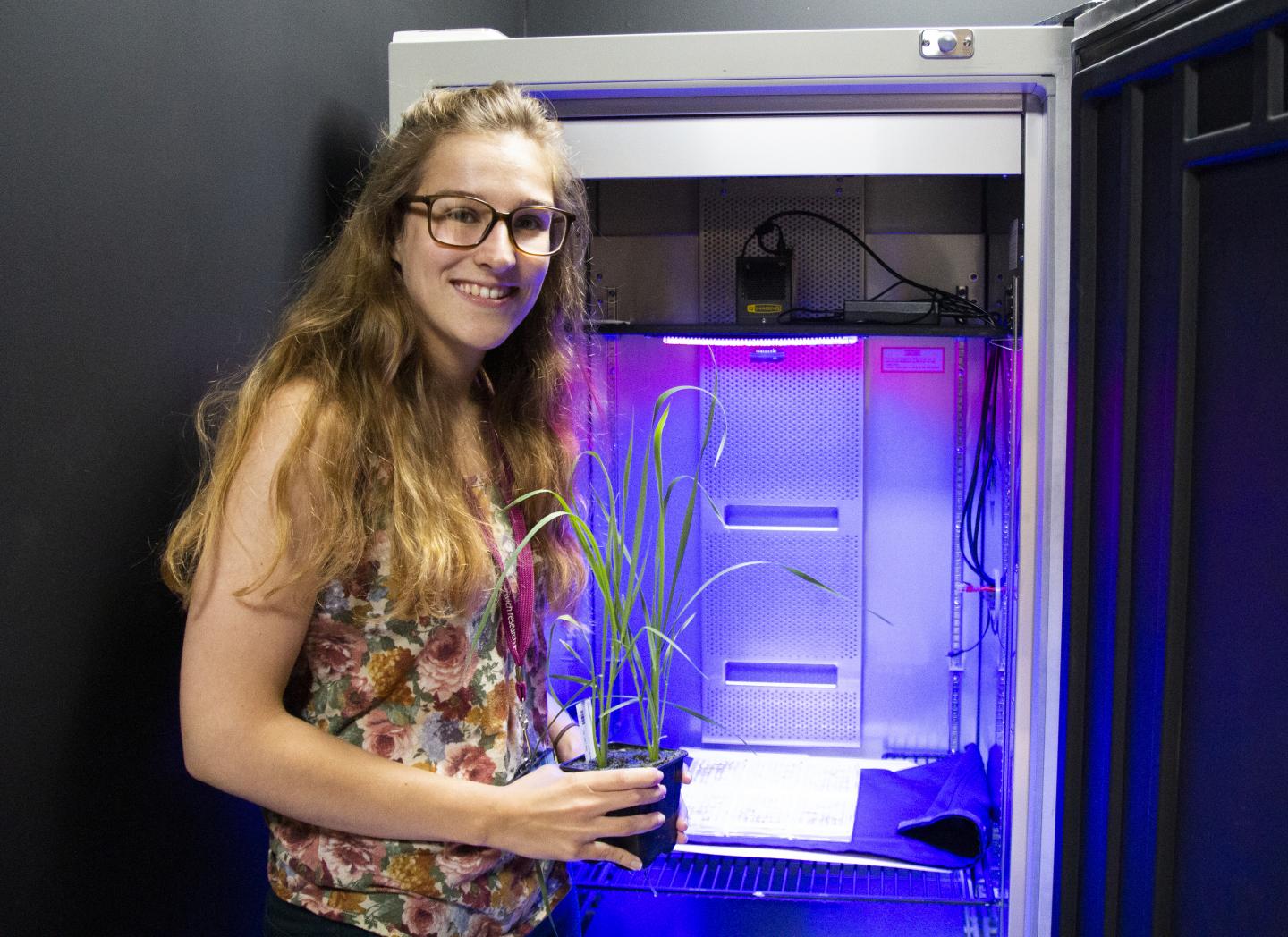 It’s widely understood that humans have a circadian clock. When we travel long distances, things get knocked out of kilter.

Daily fluctuating rhythms were first discovered in plants in 1729 by measuring leaf-movement rhythms in Mimosas. Now research at the Earlham Institute, led by PhD Student Hannah Rees, has ‘shed light’ on how they work in different crop plant species.

Importantly, Hannah has developed a robust method to accurately measure plant clocks in wheat and Brassica using naturally occurring ‘delayed fluorescence’, which will be very useful for research into improving crops for the future.

Delayed fluorescence is light that is emitted by plants after being illuminated, which persists for a long time when placed in the dark.* The paper, published in Plant Methods, sheds light on what makes wheat ‘tick’, and how plants show signs of ageing.

We’re not so different, you and I

The circadian clock in people is well known, and well understood – such as experiencing jet lag and sleep-deprivation after travelling between different time zones. Even the changing of the clock by one hour either side of summer can put us out of sync, our body clocks taking a few days to re-attune.

Plants, too, suffer similar consequences of changing light conditions, which are now easier to investigate thanks to the recent work at EI. Among the findings, the in-built circadian clock keeps ticking along in Brassica plants in 24-hour light, whereas in wheat the clock oscillates better under constant darkness.

More interestingly still, it appears that in both types of plants, the circadian clock oscillates faster as the plant ages – which is true of even older leaves and younger leaves on a single plant.

Hannah has developed a robust method of measuring daily patterns in plants such as wheat, which has proven difficult previously as most methods have relied on using genetic modification – a technique that isn’t very easy to pull off in wheat. Other techniques looking at leaf movement only work in dicots (plants with two seed leaves), whereas wheat is a monocot (a plant with one seed leaf, like grasses and lilies).

The technique works by measuring delayed fluorescence from photosystem II, which as the name implies, is crucial for photosynthesis. The activity of photosystem II oscillates in a 24-hour window, which is very useful in organisms which rely on the sun for energy.

This technique will allow researchers to detect differences between circadian rhythms in crops currently being grown for food and help them work out if the rhythm fits the environment in which it is being grown. Crops grown on the equator may need different rhythms to plants grown near the poles because of differences in day-length. Plants with circadian clocks in sync with the natural environment are healthier and produce higher yields.

Lead author Hannah Rees, said: “We’re really thrilled to lead the first study using delayed fluorescence (light emission) as a tool for enhancing crop plants, focusing on the useful insight we’ve gained on the differences between how the clock rhythms work in Brassica and wheat.

“The fact that the clock speeds up as the plant gets older is also really amazing and our next question is why this might happen? Is there a biological advantage for having a ‘teenage’ clock and an ‘elderly clock’? We hope our work will help to improve crop yields by allowing breeders to select crops with circadian clocks matched for optimal growth in certain regions of the world.”

The research by the Anthony Hall Group at EI into circadian clocks has great potential in breeding better wheat. We already know that circadian clocks are important for biological processes, such as:

With better knowledge and understanding of how clocks work in wheat now possible, we can delve into the potential for improving this important staple crop in the future.

Coral reefs shifting away from equator

Our tears could one day tell us if we have glaucoma