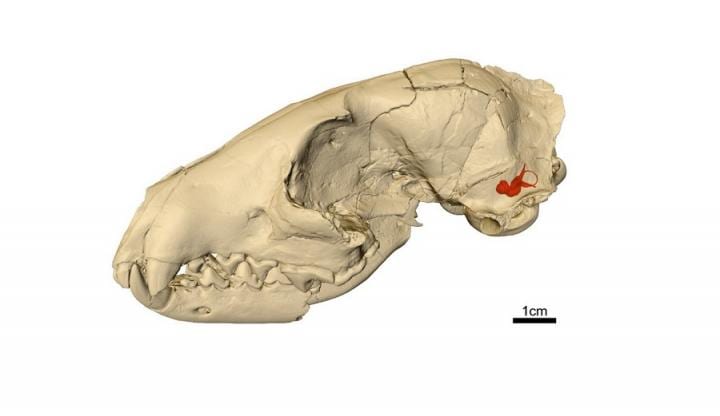 Analysis of the skulls of lions, wolves and hyenas has helped scientists uncover how prehistoric dogs hunted 40 million years ago.

A study has revealed that the first species of dog – called Hesperocyon gregarius – pounced on its prey in the same way that many species, including foxes and coyotes, do today.

The findings also show that the largest dog species ever to live – known as Epicyon haydeni – hunted in a similar way. The animals – which lived from 16 until seven million years ago – could grow to the size of a grizzly bear.

Comparisons between computerised scans of fossils and modern animals have shed light on the hunting methods used by prehistoric members of a group of mammals known as carnivorans. These include modern-day foxes, wolves, cougars and leopards.

Scientists at the Universities of Edinburgh and Vienna used the scans to create digital models of the inner ears of 36 types of carnivoran, including six extinct species.

The team found that the size of three bony canals in the inner ear – the organ that controls balance and hearing – changed over millions of years as animals adopted different hunting styles.

Faster predators – such as cheetahs, lions and wolves – developed large ear canals that enable them to keep their head and vision stable while ambushing or chasing prey at speed, the team says.

Their findings reveal that inner ear structure indicates whether a species descended from dog-like animals or belongs to one of four families of animals resembling cats. A distinctive angle between two parts of the inner ear is much larger in dog-like animals, the team found.

Ms Schwab, based in the University of Edinburgh’s School of GeoSciences, said: “For me, the inner ear is the most interesting organ in the body, as it offers amazing insights into ancient animals and how they lived. The first dog and the largest-ever dog are such fascinating specimens to study, as nothing like them exists in the world today.”

Millions on prescription sleeping pills would sleep through a fire alarm