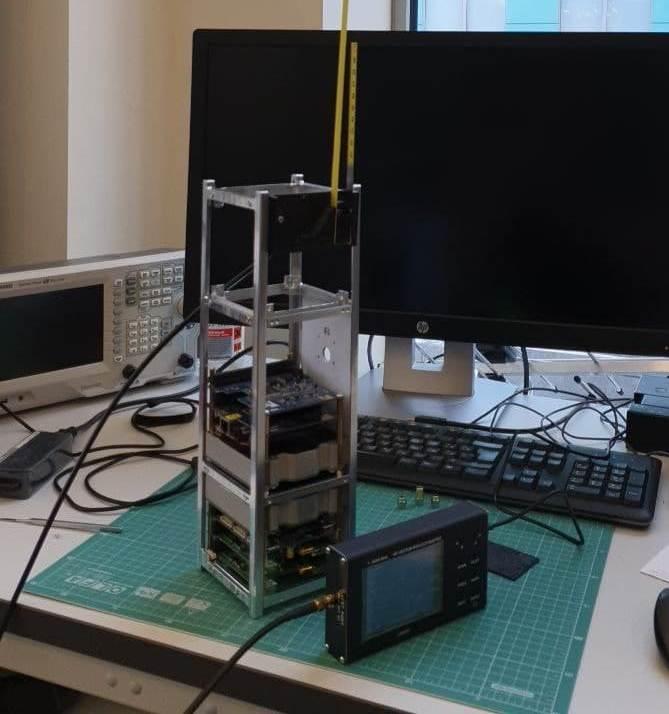 Scientists from the Skoltech Space Center (SSC) have developed nanosatellite interaction algorithms for scientific measurements using a tetrahedral orbital formation of CubeSats that exchange data and apply interpolation algorithms to create local maps of physical measurements in real time. The study presents an example of geomagnetic field measurement, which shows that these data can be used by other satellites for attitude control and, therefore, provided on a data-as-a-service basis. The research was published in the journal Advances in Space Research.

SSC is the research lead within the Nanosatellites Swarm project (“Roy MKA”) performed by a consortium of several Russian universities and included in the ISS experimental program led by RSC Energia. “Roy MKA” aims to deploy autonomous groups of CubeSats and verify their swarm behavior.

For one of the “Roy MKA” experiments, SSC researchers suggested a tetrahedral formation, which provides an ability to measure the geomagnetic field at any point on orbit. The system is fully autonomous, which means that satellites can process and update measurement data on board and predict magnetic field values by interpolation.

“We use the Kriging interpolation which helps to select the magnetic field values in accordance with its characteristics (autocorrelation). Since the magnetic field is three-dimensional, we have to use a tetrahedron, the simplest three-dimensional simplex with three points on a plane. Thus, we have chosen a 4-satellite formation as the smallest possible configuration for the task. Our project may be the first to create such a configuration of nanosatellites,” lead author and Skoltech PhD student Anton Afanasev explains.

The study demonstrated that the Kriging interpolator is a universal tool when it comes to processing data from small satellites. Satellites exchange data about their positions and measurements to create a self-organizing system capable of demonstrating collective behavior and performing tasks common for the constellation, which constitutes the key goal of the “Roy MKA” project.

“An important practical outcome of this study is that it can improve the performance of the attitude control and station-keeping systems that use magnetometers (magnetic field sensors). Notably, improved attitude control can also be used by other spacecraft that happen to be in close proximity to the constellation of the satellites that exchange magnetic field data and make them more accurate using the Kriging algorithms. Processing swarm measurements can evolve into a GPS-type service, which will enable distributing magnetic field values rather than object velocities and coordinates,” Anton adds.

The new method can be used to build large constellations at a lower total cost by using less expensive sensors.

Skoltech is a private international university located in Russia. Established in 2011 in collaboration with the Massachusetts Institute of Technology (MIT), Skoltech is cultivating a new generation of leaders in the fields of science, technology and business, is conducting research in breakthrough fields, and is promoting technological innovation with the goal of solving critical problems that face Russia and the world. Skoltech is focusing on six priority areas: data science and artificial intelligence, life sciences, advanced materials and modern design methods, energy efficiency, photonics and quantum technologies, and advanced research. Web: https://www.skoltech.ru/.