Sites in the brain where RNA is edited could help to better understand neurodevelopment and disease, researchers have found

Mount Sinai researchers have catalogued thousands of sites in the brain where RNA is modified throughout the human lifespan in a process known as adenosine-to-inosine (A-to-I) editing, offering important new avenues for understanding the cellular and molecular mechanisms of brain development and how they factor into both health and disease. 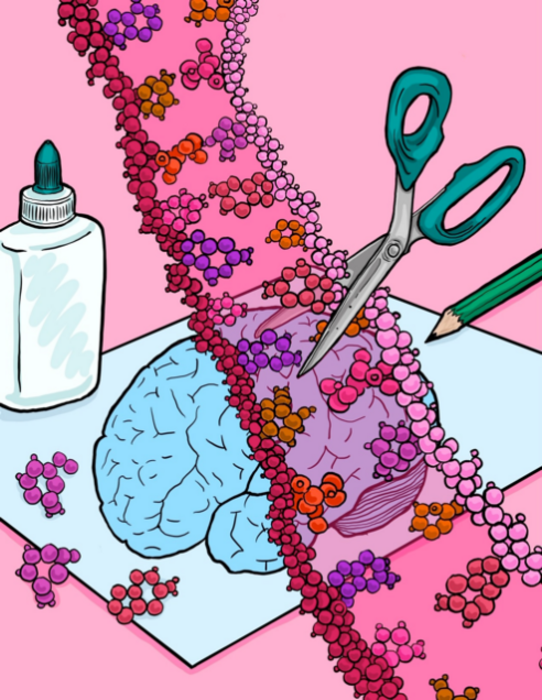 Mount Sinai researchers have catalogued thousands of sites in the brain where RNA is modified throughout the human lifespan in a process known as adenosine-to-inosine (A-to-I) editing, offering important new avenues for understanding the cellular and molecular mechanisms of brain development and how they factor into both health and disease.

In a study published in Cell Reports, the team described how the rate of RNA editing in the brain increases as individuals age, with implications for dissecting the pathology of altered A-to-I editing across a range of neurodevelopmental and aging disorders.

“Our work provides more nuanced and accurate insights into the contribution of RNA modifications by A-to-I editing during human brain development,” says senior author Michael Breen, PhD, Assistant Professor of Psychiatry, and Genetics and Genomic Sciences, at the Icahn School of Medicine at Mount Sinai, and a member of the Seaver Center for Autism Research and Treatment. “The field has already identified millions A-to-I sites in the brain, which has made it particularly challenging to determine which of these are likely to be physiologically important. We narrowed this down to about 10,000 sites with potential functional roles from early fetal development through advanced aging. By providing an atlas of these sites, we’ve opened the door to further understand brain neurodevelopment through the lens of A-to-I RNA modifications.”

DNA holds the genetic blueprint for humans and other living creatures, but RNA actually carries out its instructions to create functional proteins. Modifications that accumulate on the RNA can alter the way a protein ultimately functions. A family of ADAR enzymes introduce these individual A-to-I changes. A handful of these edits are known to play essential physiological roles during early fetal development by regulating synaptic transmission and neuronal signaling in the brain. This work shows that across the human lifespan, RNA in the brain accumulates thousands of individual edits, and these changes are likely to have functional consequences as we age.

The Mount Sinai study generated and compiled brain RNA-sequence data across more than 800 individuals. This data covered all stages of prenatal and postnatal development, from the very first embryonic progenitor cells to functionally distinct brain tissue from centenarians. This broad sweep enabled researchers to develop a model depicting for the first time how A-to-I editing evolves over a lifetime, in which unedited RNAs are expressed, and possibly translated into proteins, more predominantly during fetal periods of development, while edited RNA is more abundant in the adult brain.

“This means that during older age there is generally a higher editing rate and frequency of A-to-I editing occurring, including stabilizing RNA structures and modulating the way RNAs interact with microRNAs,” notes Dr. Breen. His research team also learned that a subset of these A-to-I sites introduce new amino-acid substitutions into the protein-coding region of the brain, an event known as RNA recoding. This is a particularly important finding inasmuch as RNA recoding has direct functional and/or structural effects on proteins.

The Mount Sinai team also sought to answer the question of how genetic variability might explain some of the differences in A-to-I editing as individuals age. They learned that because editing sites are strongly regulated during early fetal development, editing levels are measurably different for thousands of sites based on unique genetic variants. This distinction evens out during postnatal development. From a basic science perspective, the dynamically regulated sites uncovered by researchers provide numerous avenues for future work to manipulate basic mechanisms of early brain development through A-to-I editing.

Previous work by Dr. Breen—whose laboratory works at the intersection of functional genomics, computational biology, and neuroscience—found that A-to-I editing is disrupted in brain tissue from individuals with neurodevelopmental disorders.

“This work provides us with immediate avenues for dissecting the pathological implications of altered A-to-I editing across a range of neurodevelopmental and aging disorders,” he says. “It’s more clear now than ever that elucidating the dynamic regulation of RNA editing can offer unique insights into their role in promoting health as well as disease.”

About the Mount Sinai Health System
Mount Sinai Health System is one of the largest academic medical systems in the New York metro area, with more than 43,000 employees working across eight hospitals, over 400 outpatient practices, nearly 300 labs, a school of nursing, and a leading school of medicine and graduate education. Mount Sinai advances health for all people, everywhere, by taking on the most complex health care challenges of our time — discovering and applying new scientific learning and knowledge; developing safer, more effective treatments; educating the next generation of medical leaders and innovators; and supporting local communities by delivering high-quality care to all who need it.

Through the integration of its hospitals, labs, and schools, Mount Sinai offers comprehensive health care solutions from birth through geriatrics, leveraging innovative approaches such as artificial intelligence and informatics while keeping patients’ medical and emotional needs at the center of all treatment. The Health System includes approximately 7,300 primary and specialty care physicians; 13 joint-venture outpatient surgery centers throughout the five boroughs of New York City, Westchester, Long Island, and Florida; and more than 30 affiliated community health centers. We are consistently ranked by U.S. News & World Report‘s Best Hospitals, receiving high “Honor Roll” status, and are highly ranked: No. 1 in Geriatrics and top 20 in Cardiology/Heart Surgery, Diabetes/Endocrinology, Gastroenterology/GI Surgery, Neurology/Neurosurgery, Orthopedics, Pulmonology/Lung Surgery, Rehabilitation, and Urology. New York Eye and Ear Infirmary of Mount Sinai is ranked No. 12 in Ophthalmology. U.S. News & World Report’s “Best Children’s Hospitals” ranks Mount Sinai Kravis Children’s Hospital among the country’s best in several pediatric specialties. The Icahn School of Medicine at Mount Sinai is one of three medical schools that have earned distinction by multiple indicators: It is consistently ranked in the top 20 by U.S. News & World Report‘s “Best Medical Schools,” aligned with a U.S. News & World Report “Honor Roll” Hospital, and top 20 in the nation for National Institutes of Health funding and top 5 in the nation for numerous basic and clinical research areas. Newsweek’s “The World’s Best Smart Hospitals” ranks The Mount Sinai Hospital as No. 1 in New York and in the top five globally, and Mount Sinai Morningside in the top 20 globally.