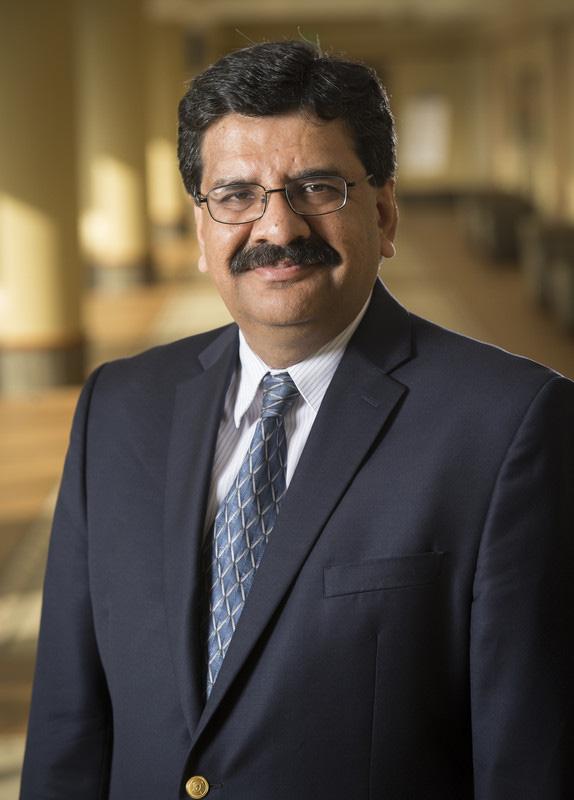 BIRMINGHAM, Ala. – Patients with chronic myeloid leukemia can be treated with tyrosine kinase inhibitors. While these effective drugs lead to deep remission and prolonged survival, primitive leukemia stem cells resist elimination during the remission and persist as a major barrier to cure.

As a result, the majority of patients with chronic myeloid leukemia, or CML, require indefinite inhibitor treatment to prevent disease recurrence. They also face risks of noncompliance, toxicity and financial burden. Development of effective therapeutic strategies to improve patient outcomes for CML and related cancers depends on identifying the key mechanisms that contribute to the persistence of these leukemic stem cells.

In a study published in the Journal of Clinical Investigation, Ajay Abraham, Ph.D., Shaowei Qiu, M.D., Ravi Bhatia, M.D., and colleagues at the University of Alabama at Birmingham show how the stress-responsive protein SIRT1 plays important roles in maintaining the regenerative potential of CML leukemic stem cells and promoting leukemia development in CML.

“Our studies provide a conceptual advance and new biological insights regarding the activity of SIRT1 and its role in CML leukemic stem cells,” said senior author Bhatia. At UAB, Bhatia is a professor of medicine, director of the Division of Hematology and Oncology, and interim director of the O’Neal Comprehensive Cancer Center at UAB.

Mitochondria are the powerhouses of the cell, supplying nearly all the energy a cell normally needs. Oxidative phosphorylation uses oxygen in producing energy; non-leukemic hematopoietic stem cells — the non-cancerous blood-forming cells of the body, from healthy mice or humans, produce energy by an alternative metabolism called glycolysis.

The SIRT1 knock-out also impaired development of CML in the mouse model. Compared with the CML mice without SIRT1 knock-out, the researchers saw significant delays in developing increased numbers of leukocytes and neutrophils, and delayed enlargement of the spleen and time of death. The deletion also reversed redistribution of CML stem cells from the bone marrow to the spleen.

SIRT1 is a deacetylase enzyme, known to deacetylate and activate the transcriptional co-activator PGC-1-alpha. This enhances mitochondrial DNA replication and gene expression, and it promotes mitochondrial activity. Bhatia and colleagues showed that PGC-1-alpha inhibitors were able to significantly reduce mitochondrial oxygen consumption, a sign of oxidative phosphorylation. Thus, the inhibitors acted similarly to the SIRT1 deletion. This finding supports an important role for PGC-1-alpha in the regulation of mitochondrial metabolism in CML stem and progenitor cells.

The researchers also found that a chemical inhibitor of SIRT1 was able to reduce oxidative phosphorylation in both mouse and human CML leukemic stem cells.

Interestingly, the SIRT1 deletion in normal, non-leukemic blood-forming stem cells did not inhibit steady-state normal hematopoiesis in the mouse model. Bhatia noted that development of effective approaches to target the persistent CML leukemic stem cells that resist tyrosine kinase-inhibitor treatment — while not causing toxicity to normal hematopoietic stem cells — has been a challenge.

Bhatia says the impact of this study extends to other hematological malignancies, including acute myeloid leukemia, myelodysplastic syndromes and myeloproliferative neoplasms.

“Our research reveals new knowledge and concepts regarding the role of SIRT1 in metabolic regulation of hematopoietic stem cell and leukemic stem cell maintenance, growth and resistance,” Bhatia said. “This raises the possibility of developing improved strategies to target kinase-independent metabolic alterations.”

At UAB, Darley-Usmar holds the Endowed Professorship in Mitochondrial Medicine and Pathology.

View of the Earth in front of the Sun