Single metasurface for simultaneous detection of SAM and OAM 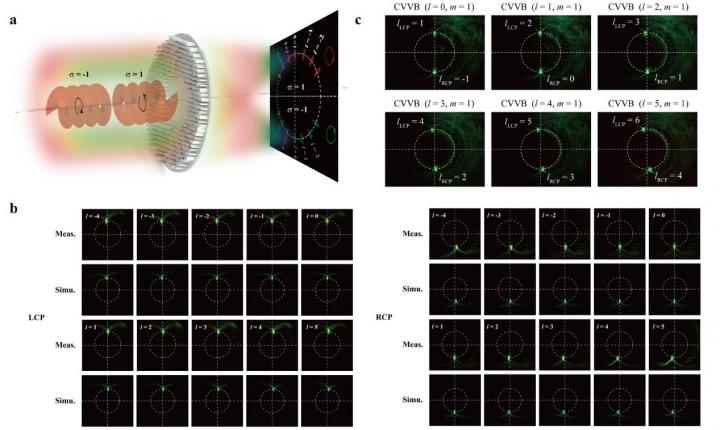 With inherent orthogonality, both SAMs and OAMs of light have been utilized to expand the dimensions of optical communications and signal processing, wherein unambiguous SAM and OAM identification is one of the significant topics. Conventional sorting approaches suffer from complicated optical setups, multiple bulky devices, repeated projection measurements, and cannot simultaneously distinguish SAM and OAM.

In a new paper published in Light Science & Application, a team of scientists, led by Professor Xiangang Luo from State Key Laboratory of Optical Technologies on Nano-Fabrication and Micro-Engineering, Institute of Optics and Electronics Chinese Academy of Sciences, and co-workers have showed that a single spin-decoupled metasurface that merges the geometric phase and dynamic phase could perform simultaneous SAM and OAM mode discrimination via momentum transformation, where vortex beams of different spins were transformed into focusing patterns on two separated halves of the screen on a transverse focal plane with topological charge-dependent azimuthal rotations. Further experimental investigations have proven that the single spin-decoupled metasurface possesses the ability to detect cylindrical vortex vector beams with simultaneous phase and polarization singularities. Spin-decoupled PMTs were experimentally demonstrated at several different wavelengths in the visible band. Finally, they showed that the proposed approach could be extended to sorting of superimposed OAMs with a proper mode interval. These results reported here may have many important applications in momentum measurement of both the spin and angular momentum and singularity detection of both phase and polarization singularities.