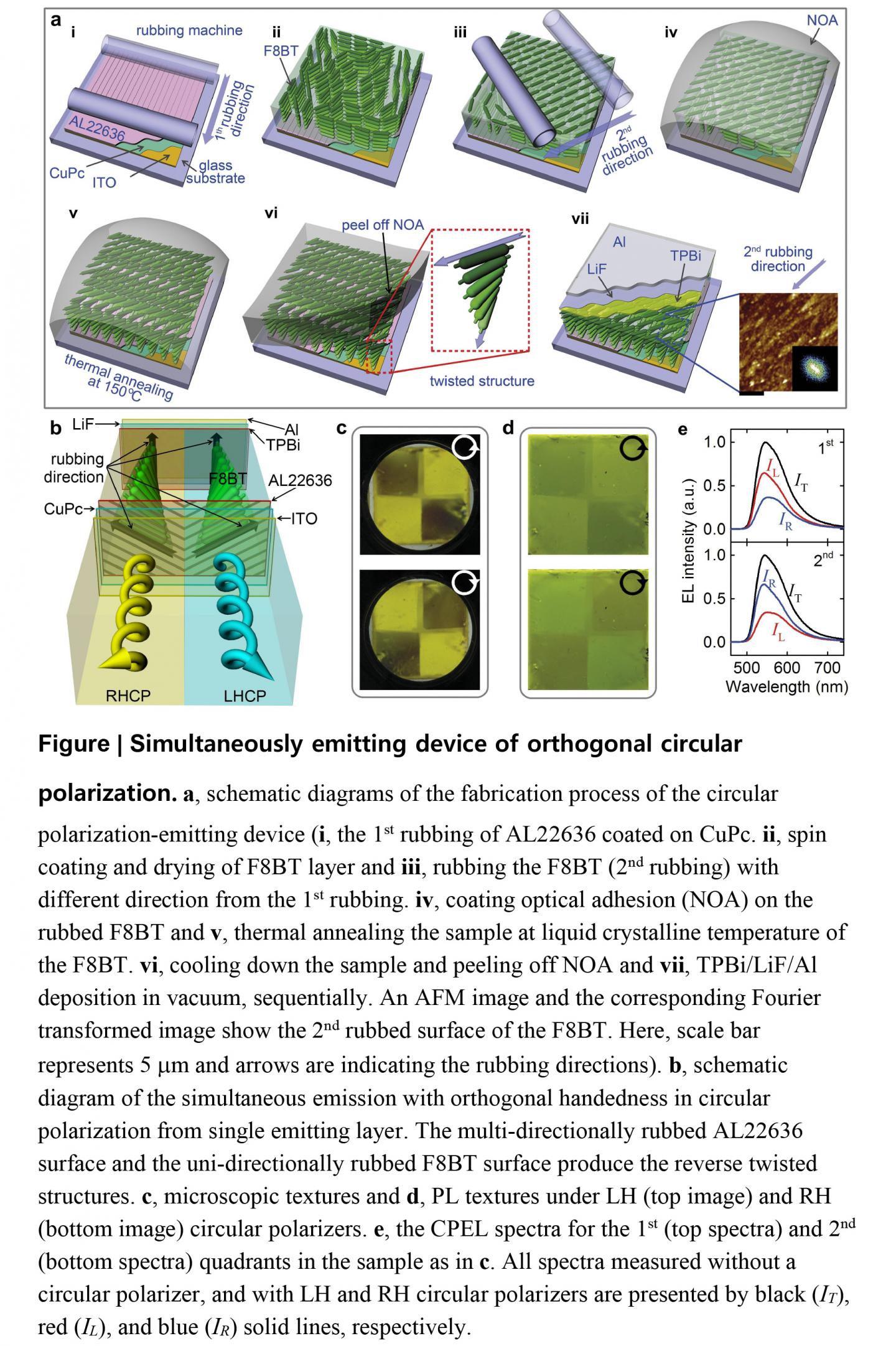 Control of the polarization of light is a key feature for displays, optical data storage, optical quantum information, and chirality sensing. In particular, the direct emission of circularly polarized (CP) light has attracted great interest because of the enhanced performance of displays such as organic light-emitting diodes (OLEDs) and light sources for characterizing the secondary structure of proteins. To actually produce the CP light, the luminescent layer should contain chiral characteristics, which can be achieved, for example, by decorating the luminophores with chiral materials or doping chiral molecules into achiral materials. However, such chirality of the luminescent layer makes it possible to generate only one kind of CP light in an entire device since it is difficult to control the chiral sense spatially.

In a new paper published in Light Science & Application, scientists from Department of Electronic Engineering, Hanyang University, Republic of Korea demonstrated simultaneously emitting device with orthogonal handedness in circular polarization from an achiral luminophore with liquid crystalline (LC) phase. By rubbing alignments of luminophores in its upper and lower surfaces in different directions, the luminescent layer is continuously twisted and thus light passing through the luminescent layer emerges as right-handed (RH) or left-handed (LH) CP light without any chiral part. More interestingly, such twisting sense is determined by the rubbing directions in its upper and lower surfaces. As a result, by generating multiple alignments in the lower surface of the achiral luminophore and unidirectional alignment in its upper surface, light-emitting device with orthogonal handedness in circular polarization was implemented with a single achiral luminophore. This experimental demonstration highlights the feasibility of the light source with multi-polarization, including orthogonal CP states, thereby paving the way towards novel applications in biosensors as well as optical devices such as OLEDs.

In a conventional OLED, since a circular polarizer in front of the OLED panel is inevitably required to prevent reflection of ambient light from a metal electrode, only half of the light extracted from the OLED panel reaches the eye. As a result, direct emission of CP light from an OLED with the same handedness as that of the circular polarizer in front of the OLED panel can increase the efficiency of the emitted light. High efficient OLED is implemented by directly generating high degree of CP light, which is achieved from a twisted structure of the LC luminophore. The twisted sense of the LC luminophore was governed by producing the different boundary conditions in its upper and lower surfaces. In addition, the degree of CP light in the twisted luminophore was theoretically calculated based on Mueller matrix analysis and a CP light-emitting mechanism was confirmed. These scientists summarize scientific achievement in their CP light-emitting device:

“For the first time, we demonstrate direct CP light emissions by using a twisted achiral conjugate polymer without any chiral component by introducing different boundary conditions in upper and lower surfaces of the polymer. By patterning different alignment directions on its one of polymer surfaces, patterned CP light with various polarization states can be achieved through the fabricating process proposed herein. Also, twisting limitation of the polymer by surface boundary conditions was systematically analyzed based on the surface anchoring energy model and the degree of CP light was theoretically calculated based on the Mueller matrix analysis.”

“The fabricating process and theoretical analysis proposed herein emphasizes the feasibility of the light source with multi-polarization, including orthogonal CP states, thereby paving the way towards novel applications in biosensors as well as optical devices such as OLEDs” the scientists forecast.

Scienmag Aug 8, 2019
Credit: Anna Mangan When the Northern Spotted Owl was protected under the Endangered Species Act in 1990, the…

An advance in molecular moviemaking shows how molecules respond to two…