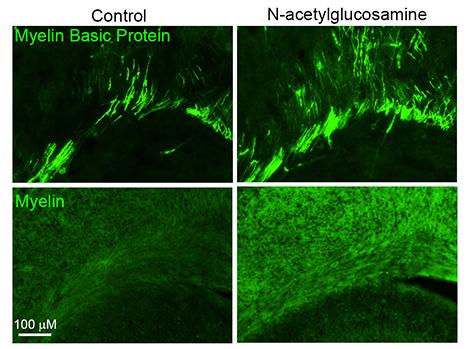 Irvine, CA – Oct. 7, 2020 – N-acetylglucosamine, a simple sugar found in human breast milk and sold as an over-the-counter dietary supplement in the United States, promotes myelin repair in mouse models and correlates with myelination levels in multiple sclerosis patients according to a new University of California, Irvine-led study.

Published in the Journal of Biological Chemistry, the study also demonstrates that in mice, delivering N-acetylglucosamine orally to lactating mothers drove primary myelination in their nursing offspring. N-acetylglucosamine is a simple sugar that is metabolically attached to proteins at the cell surface to control cellular function.

“We found that N-acetylglucosamine activates myelin stem cells to promote primary myelination and myelin repair,” said Michael Demetriou, MD, PhD, FRCP(C), professor of neurology, microbiology and molecular genetics at UCI School of Medicine and leader of the study. “Our data raises the intriguing possibility that N-acetylglucosamine may be a simple therapy to promote myelin repair in multiple sclerosis patients”. Formal human studies will be required to test this theory.

“Interestingly, since N-acetylglucosamine is a major component of human breast milk but not baby formula, it may explain some of the cognitive function and myelination benefits realized by children fed breast milk as opposed to formula.” said Michael Sy, MD, PhD, assistant professor of neurology at UCI School of Medicine, co-director of the regional MS program at the VA Long Beach Healthcare System, and first author of the study.

Dr. med. Alexander Brandt, MD, who led the clinical parts of the study together with Dr. med. Friedemann Paul, MD, added, “The association of reduced N-acetylglucosamine serum levels with white matter changes in the brain of patients with multiple sclerosis suggests that N-acetyglucosamine deficiency may contribute to disease severity.”

At the time of the study, Brandt has been the head of the Translational Neuroimaging laboratory in the Clinical Neuroimmunology group at Charité – Universitätsmedizin Berlin, which is led by Paul. Brandt has since transitioned to the UCI School of Medicine as associate professor of neurology.

Formal clinical trials are required to test the applications identified in this study and are currently being pursued by the investigators.

This study was funded in part by a Marilyn Hilton Innovator Award, the National Institutes of Health and the German Research Foundation Excellence Initiative, NeuroCure.

Each year, the UCI School of Medicine educates more than 400 medical students, and nearly 150 doctoral and master’s students. More than2 700 residents and fellows are trained at UCI Medical Center and affiliated institutions. The School of Medicine offers an MD; a dual MD/PhD medical scientist training program; and PhDs and master’s degrees in anatomy and neurobiology, biomedical sciences, genetic counseling, epidemiology, environmental health sciences, pathology, pharmacology, physiology and biophysics, and translational sciences. Medical students also may pursue an MD/MBA, an MD/master’s in public health, or an MD/master’s degree through one of three mission-based programs: the Health Education to Advance Leaders in Integrative Medicine (HEAL-IM), the Leadership Education to Advance Diversity-African, Black and Caribbean (LEAD-ABC), and the Program in Medical Education for the Latino Community (PRIME-LC). The UCI School of Medicine is accredited by the Liaison Committee on Medical Accreditation and ranks among the top 50 nationwide for research. For more information, visit som.uci.edu.