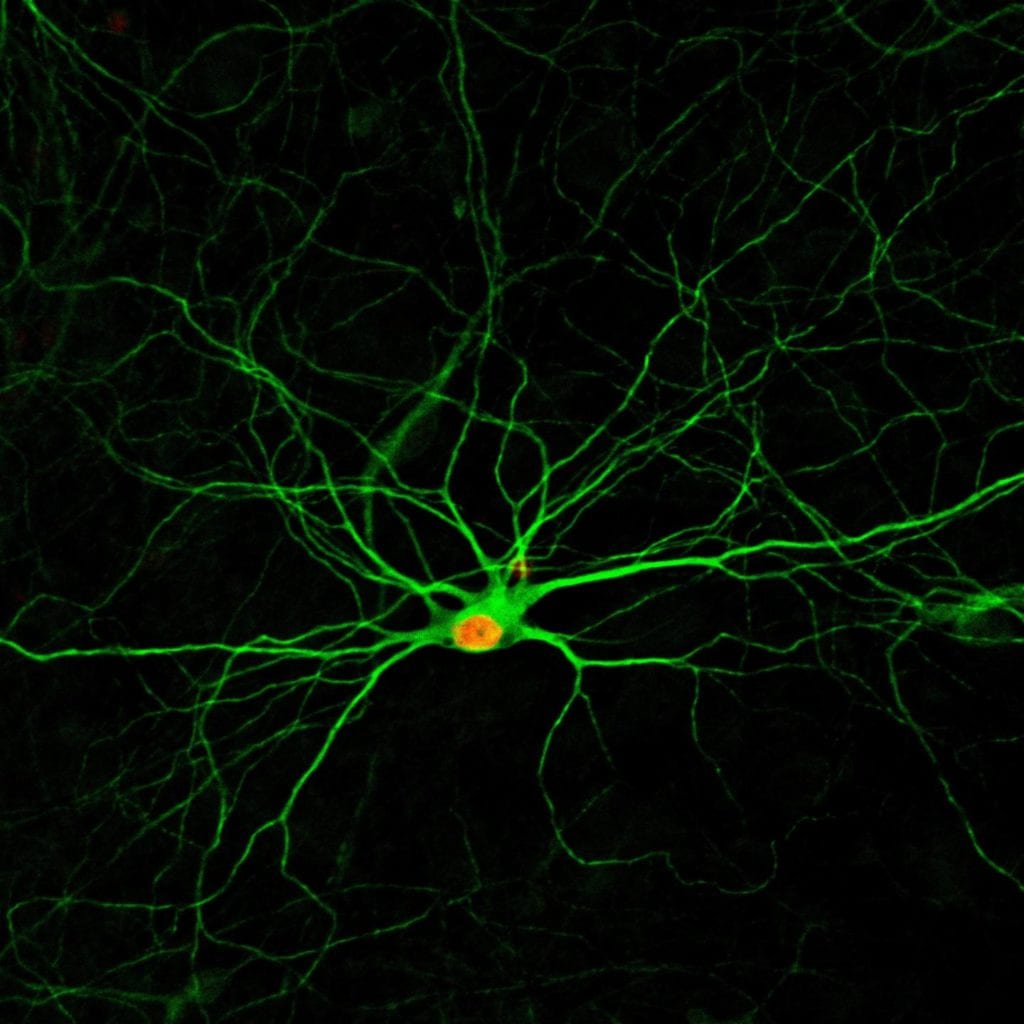 A simple drug cocktail that converts cells neighboring damaged neurons into functional new neurons could potentially be used to treat stroke, Alzheimer’s disease, and brain injuries. A team of researchers at Penn State identified a set of four, or even three, molecules that could convert glial cells–which normally provide support and insulation for neurons–into new neurons. A paper describing the approach appears online in the journal Stem Cell Reports on February 7, 2019.

“The biggest problem for brain repair is that neurons don’t regenerate after brain damage, because they don’t divide,” said Gong Chen, professor of biology and Verne M. Willaman Chair in Life Sciences at Penn State and leader of the research team. “In contrast, glial cells, which gather around damaged brain tissue, can proliferate after brain injury. I believe turning glial cells that are the neighbors of dead neurons into new neurons is the best way to restore lost neuronal functions.”

Chen’s team previously published research describing a sequence of nine small molecules that could directly convert human glial cells into neurons, but the large number of molecules and the specific sequence required for reprogramming the glial cells complicated the transition to a clinical treatment. In the current study, the team tested various numbers and combinations of molecules to identify a streamlined approach to the reprogramming of astrocytes, a type of glial cells, into neurons.

“We identified the most efficient chemical formula among the hundreds of drug combinations that we tested,” said Jiu-Chao Yin, a graduate student in biology at Pen State who identified the ideal combination of small molecules. “By using four molecules that modulate four critical signaling pathways in human astrocytes, we can efficiently turn human astrocytes–as many as 70 percent–into functional neurons.”

The resulting chemically converted neurons can survive more than seven months in a culture dish in the lab. They form robust neural networks and send chemical and electrical signals to each other, as normal neurons do inside the brain.

Using three of the small molecules instead of four also results in the conversion of astrocytes into neurons, but the conversion rate drops by about 20 percent. The team also tried using only one of the molecules, but this approach did not induce conversion.

Chen and his team had previously developed a gene therapy technology to convert astrocytes into functional neurons, but due to the excessive cost of gene therapy–which can cost a patient half a million dollars or more–the team has been pursuing more economical approaches to convert glial cells into neurons. The delivery system for gene therapies is also more complex, requiring the injection of viral particles into the human body, whereas the small molecules in the new method can be chemically synthesized and packaged into a pill.

“The most significant advantage of the new approach is that a pill containing small molecules could be distributed widely in the world, even reaching rural areas without advanced hospital systems,” said Chen. “My ultimate dream is to develop a simple drug delivery system, like a pill, that can help stroke and Alzheimer’s patients around the world to regenerate new neurons and restore their lost learning and memory capabilities.”

The researchers acknowledge that many technical issues still need to be resolved before a drug using small molecules could be created, including the specifics of drug packaging and delivery. They also plan to investigate potential side effects of this approach in future studies in order to develop the safest drug pills. Nonetheless, the research team is confident that this combination of molecules has promising implications for future drug therapies to treat individuals with neurological disorders.

“Our years of effort in discovering this simplified drug formula take us one step closer to reaching our dream,” said Chen.

Could theatre be way forward in communicating conservation messages?