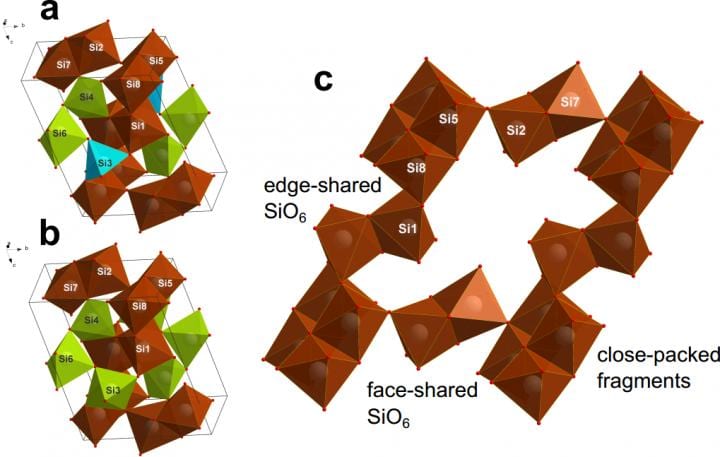 According to Pauling’s rules, the fragments of the atomic lattice in inorganic materials are connected by vertices”, because bonding by faces is the most energy-intensive way to form a chemical connection, therefore, it does not exist in nature. However, scientists have proved, both experimentally and theoretically, using NUST MISIS’ supercomputer, that it is possible to form such a connections if the materials are at ultra-high pressure conditions. The obtained results open a completely new way in the development of modern materials science, showing that fundamentally new classes of materials exist at extreme conditions.

“In our work, we have synthesized and described metastable phases of high-pressure silica, coesite-IV and coesite-V: their crystal structures are drastically different from any of the earlier described models, – Igor Abrikosov, Leader of the Theoretical Research Team, Professor, Head of the NUST MISIS Materials Modelling and Development Laboratory. – Two newly discovered coesites contain octahedrons SiO6, that, contrary to Pauling’s rule, are connected through common face, which is the most energy-intensive for a chemical connection. Our results show that the possible silicate magmas in the lower mantle of the Earth can have complex structures, which makes these magmas more compressible than predicted before”.

Research team, led by Professor Igor Abrikosov (NUST MISIS, Russia, Linköping University (Sweden)), focus on the study of the materials at ultrahigh pressure. To put a material in such extreme conditions is one of the most promising ways of creating qualitatively new materials that would open new fantastic opportunities. For instance, in one of the recent papers scientists have reported on the creation of nitrides that were thought impossible to obtain.

Information about the structure and mechanical properties of silicon oxide is vital to understand the processes taking place in the mantle of our planet. While studying the structure of the material, which exists in extremely high temperatures and pressures deep in the Earth’s interior, scientists have discovered that a special modification of silicon oxide – polymorph-coesite undergoes a number of phase transition at pressure of 30 GPa and form new phases (“coesite-IV” and “coesite-V”), which maintain tetrahedrons SiO4 as the main structural elements of the crystal lattice.

In the new experiments scientists have gone further by compressing silicon oxide in a diamond anvil to the pressure of more than 30 GPa and have seen structural changes in this phase using single-crystal x-ray diffraction. The results are surprising: these structural changes are exceptions to Pauling’s rules.

Scientists have discovered two absolutely new modifications of coesite (coesite-IV and coesite-V) with structures (Figure 1) that are exceptional and “impossible” from the classical point of view of crystal chemistry: they have pentacoordinated silicon, adjacent octahedrons SiO6, and consist of four-, five- and six-coordinated silicon at the same time. Moreover, several fragments of the atomic lattice connect by faces, not vertices, which is impossible according to Pauling’s rules.

Scienmag Nov 15, 2019
Software-only solution creates maps in a matter of minutes, allowing locally collected video to be processed into…