North Carolina State University researchers show that the shape of flowers has the biggest effect on how parasites are transmitted to bees, an important consideration for declining populations of our prodigious pollinators. The findings could help stakeholders plant flowers that are less likely to spread parasites in pollinator habitats. 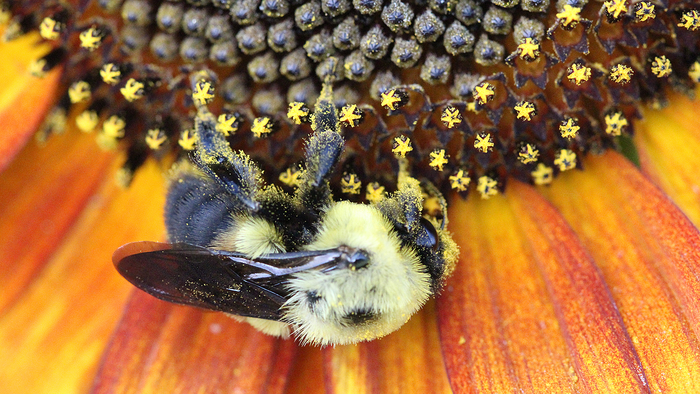 North Carolina State University researchers show that the shape of flowers has the biggest effect on how parasites are transmitted to bees, an important consideration for declining populations of our prodigious pollinators. The findings could help stakeholders plant flowers that are less likely to spread parasites in pollinator habitats.

The researchers examined the common eastern bumble bee (Bombus impatiens) and a gut parasite called Crithidia bombi to study how floral traits – like the size and shape of flowers or number of flowers – played roles in three steps that lead to parasite transmission to bees on flowers: fecal deposition on flowers, parasite survival on flowers, and acquisition of the parasite by a new bee host. Parasite spread has been implicated as a major driver of bee population decline.

“Of the flower traits we measured, floral shape was the best predictor of parasite transmission to bees,” said Mario Simon Pinilla-Gallego, a former Ph.D. student in the Department of Applied Ecology at NC State and co-corresponding author of a paper describing the research, published in the journal Ecology.

“Wide and short flowers – like black-eyed Susans and coneflowers – reduce the survival of the parasite on flowers, but at the same time they collect more bee feces, and bees are more likely to come in contact with and acquire the parasite on these types of flowers,” said Rebecca Irwin, professor of applied ecology at NC State and co-corresponding author of the paper.

The researchers say that identifying floral traits and flower species that have lower rates of parasite transmission to bees could provide a win-win for pollinators, as stakeholders could provide flower mixes that both promote bee health and provide floral resources for bees.

The researchers add that other factors – how often and how long bees visit flowers, the behavior of bees while foraging, and environmental factors that could change the effects of particular floral traits – provide future directions for studying bee health.

The project was supported by the National Institute of General Medical Sciences of the National Institutes of Health under Award Number R01GM122062. Funding for the undergraduate students came from the BeeMORE program by the USDA-NIFA Research and Extension Experiential Learning for Undergraduates (REEU) Fellowships Program. Pinilla-Gallego received support from the Southeast Climate Adaptation Science Center.

Abstract: The spread of parasites is one of the primary drivers of population decline of both managed and wild bees. Several bee parasites are transmitted by the shared use of flowers, turning floral resources into potential disease hotspots. However, we know little about how floral morphology and floral species identity affect different steps of the transmission process. Here, we used the gut parasite Crithidia bombi and its primary host, bumble bees (Bombus spp.), to examine whether floral traits or species identity better predict three basic steps of parasite transmission on flowers: feces deposition on flowers, survival of the parasite on flowers, and acquisition by a new host. We also identified which traits and/or species were most strongly associated with each step in the transmission process. We found that both trait- and species-based models fit the data on deposition of feces and survival of C. bombi on flowers, but that species-based models provided a better fit than trait-based ones. However, trait-based models were better at predicting the acquisition of C. bombi on flowers. While different species tended to support higher fecal deposition or parasite survival, we found that floral shape provided explanatory power for each of the transmission steps. When we assessed overall transmission potential, floral shape had the largest explanatory effect, with wider, shorter flowers promoting higher transmission. Taken together, our results highlight the importance of flower species identity and floral traits in disease transmission dynamics of bee parasites, and floral shape as an important predictor of overall transmission potential. Identifying traits associated with transmission potential may help us create seed mix that presents lower parasite transmission risk for bees for use in pollinator habitat.