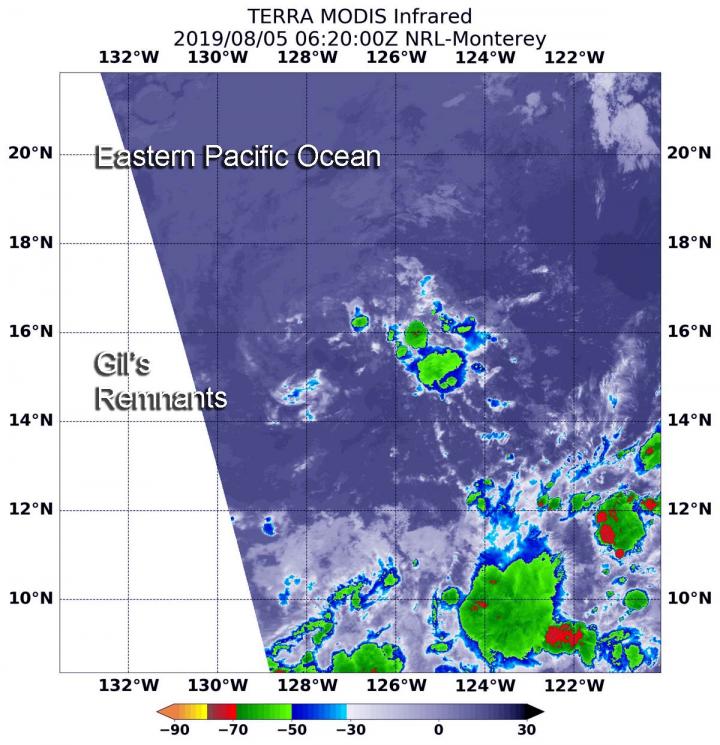 Tropical Storm Gil was a two day tropical cyclone in the Eastern Pacific Ocean. It formed on Saturday, August 3, and by the end of the day on August 4, it was already a remnant low pressure area. On August 5, though, NASA’s Terra satellite found a couple of small areas of strong storms left in the remnants of Gil.

Tropical Depression 8E formed on Aug. 3 around 11 a.m. EDT, about 930 miles (1,495 km) southwest of the southernmost tip of Baja California, Mexico. By 5 p.m. EDT, it strengthened into a tropical storm and was re-named Gil. Gil peaked 6 hours later when maximum sustained winds reached 40 mph (65 kph). It weakened quickly after that time.

It was just the next day, that NOAA’s National Hurricane Center (NHC) noted that Gil had degenerated into a remnant low pressure area. At that time, Gil was located about 1,255 miles (2,020 km) southwest of the southern tip of Baja California.

NASA’s Terra satellite uses infrared light to analyze the strength of storms by providing temperature information about the system’s clouds. The strongest thunderstorms that reach high into the atmosphere have the coldest cloud top temperatures.

On Aug. 5 at 2:20 a.m. EDT (0620 UTC), the Moderate Imaging Spectroradiometer or MODIS instrument that flies aboard NASA’s Terra satellite gathered infrared data on Gil’s remnants. There were a couple of small areas of strong storms  where thunderstorms had cloud top temperatures as cold as minus 50 degrees Fahrenheit (minus 45.5 Celsius), but Gil is not expected to regenerate.

New Zealand’s biodiversity will take millions of years to recover