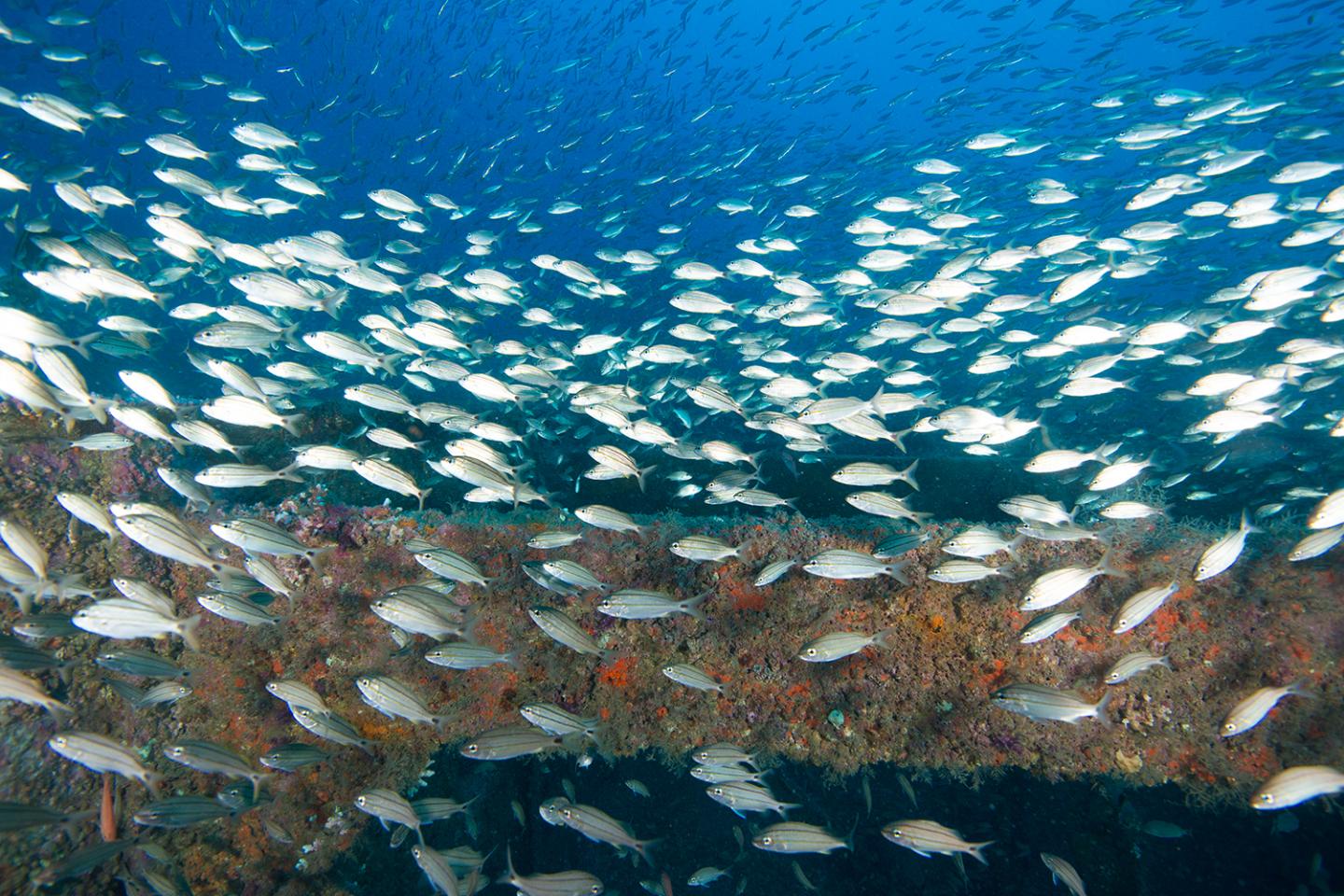 DURHAM, N.C. — Tropical and subtropical fish are taking up residence on shipwrecks and other sunken structures off the North Carolina coast. This pattern may continue or even accelerate in coming years given predictions of warming oceans under climate change, a new study co-led by Duke University scientists suggests.

“The artificial reefs created by these structures may be acting as stepping stones for fish that are moving northward and living at the edge of their geographic range, or beyond it, in search of suitable habitat,” said Avery B. Paxton, a visiting scholar at the Duke University Marine Laboratory, who was lead author of the study.

“Globally, there is broad evidence that many tropical fish species are shifting their ranges poleward and to deeper waters in response to changing ocean conditions, and what we see on these reefs seems to fit that pattern,” she said.

One of the most surprising findings of the study is that the tropical and subtropical fish observed off North Carolina exhibit a strong preference for hanging out on human-made structures versus natural rocky reefs found nearby, noted J. Christopher Taylor, a research ecologist at NOAA’s National Centers for Coastal Ocean Science and a co-author of the study.

“It could be that the zooplankton and smaller fish these species eat are more plentiful on artificial reefs. Or it could be that human-made reefs’ complex structures give the fish more nooks and crannies where they can evade predators. We’re still trying to figure it out,” Taylor said.

The fishes’ preference for artificial habitats suggests networks of the human-made structures — which are already commonly found up and down the East Coast and in other waters worldwide — could act as underwater corridors the fish use to reach the habitats they need to survive, said Paxton, who also works with CSS Inc. under contract to NOAA’s National Centers for Coastal Ocean Science.

Paxton, Taylor and their colleagues published their peer-reviewed paper May 6 in Nature Communications Biology.

To do the study, teams of scuba-diving scientists conducted population and species counts at 30 artificial and natural reefs off the N.C. coast between 2013 and 2015. To track seasonal differences in fish populations, most of the reefs were visited four times a year.

Analysis of the data confirmed that the number and diversity of tropical and subtropical fish on deep artificial reefs was far greater than on nearby natural reefs.

Temperate fish species such as black sea bass and tautog, on the other hand, were far more prevalent on the area’s natural rocky reefs.

The depth of the artificial reef mattered hugely, Paxton noted.

“We didn’t see these patterns on artificial reefs at shallow or intermediate depths, we only saw them on deep reefs, located between 80 to 115 feet below the surface, where water temperatures often experience less seasonal change,” she said.

Other co-authors were Charles H. Peterson, Alyssa M. Adler and Emily A. Pickering of the University of North Carolina at Chapel Hill’s Institute of Marine Sciences. Paxton conducted the field research for the study while she was a doctoral student in Peterson’s lab.

Gut microbes may affect the course of ALS