Knowing whether or not marine microbes engage in photosynthesis — the use of sunlight to turn carbon dioxide and water into energy — could help scientists to learn if ocean bacteria play a role in the global carbon cycle. 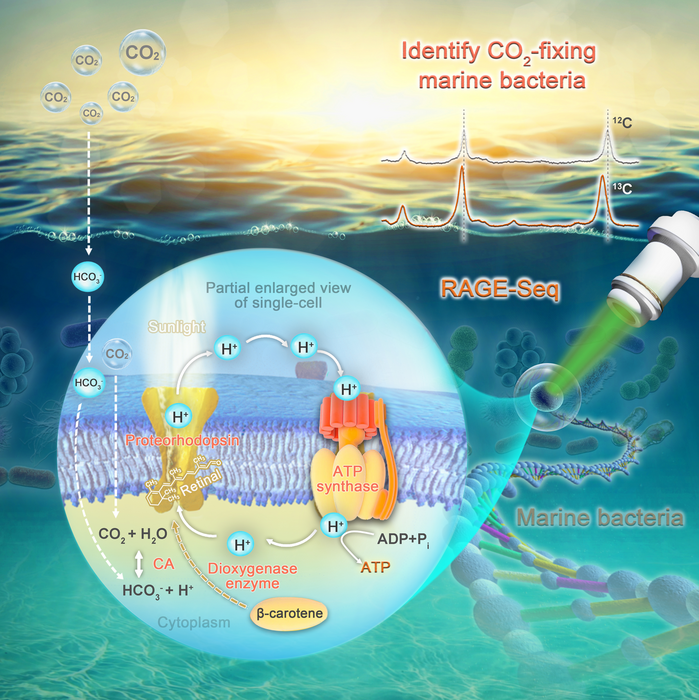 Knowing whether or not marine microbes engage in photosynthesis — the use of sunlight to turn carbon dioxide and water into energy — could help scientists to learn if ocean bacteria play a role in the global carbon cycle.

However, most marine microbes remain unstudied, in part because they do not grow under laboratory conditions, which limits the scientific community’s knowledge on if these species use photosynthesis.

Researchers from the Qingdao Institute of Bioenergy and Bioprocess Technology (QIBEBT) of the Chinese Academy of Sciences (CAS) have directly identified carbon-dioxide-fixing cells — or cells that take in CO2 — from seawater and used a Raman-spectroscopy technique to determine that their sample contains functioning genes for light harvesting, suggesting that the bacteria do engage in photosynthesis.

Their results were published in BioDesign Research on Oct. 21.

Chlorophyll-based photosynthesis is well known light-harvesting system for CO2 fixation. Photosynthesis based on a type of protein known as proteorhodopsin, or PR, has been reported to fix CO2 in the presence of light. Subsequently, certain types of CO2-fixation in marine bacteria have been reported. “PR-containing bacteria could be the most abundant, and microbial rhodopsins, another type of protein, could largely contribute to solar energy harvesting in the oceans. However, it is still elusive whether PR-containing bacteria in natural condition can fix CO2,” said co-first author JING Xiaoyan, senior engineer at the Single-Cell Center of QIBEBT.

The researchers first identified CO2-fixing cells from seawater taken from the euphotic zone — or uppermost zone of the ocean, which is exposed to sunlight — of China’s Yellow Sea by tracking their intake of a compound C-bicarbonate. The researchers did this by using single-cell Raman spectra (SCRS), a technique used to study molecules. “Then we used a technique called Raman-activated Gravity-driven Encapsulation, or RAGE, to isolate target cells of Pelagibacter, the bacteria we studied, which is a member of the bacteria group SAR11,” said co-first author XU Teng, postdoctor at Single-Cell Center of QIBEBT. The researchers amplified the genomes of these isolated Pelagibacter single-cells and sequenced each cell.

“Employing an improved Raman-activated cell sorting technique that sorts and sequences microbiome at precisely one-cell resolution, we reveal that uncultured Pelagibacter spp., one of the most abundant SAR11 marine bacteria, can use light-powered metabolism for CO2 fixation in seawater and thus contribute to global carbon cycling,” said co-first author GONG Yanhai, assistant research fellow at Single-Cell Center of QIBEBT.

“This study demonstrates that RAGE-mediated analysis of a single-cell genome can establish a reliable link between the phenotype and genotype of uncultured bacteria in the ocean, which solves a basic problem and paves the way for function-based dissection of the ‘biological dark matter’ in the environment,” said co-corresponding author Prof. HUANG Wei from the University of Oxford.

“Further investigations could be extended to other seawater samples from different depths and regions,” said Prof. XU Jian from Single-Cell Center of QIBEBT. “Also, it is worthwhile to integrate and apply both SCRS and one-cell transcriptomic techniques for further studies on CO2-fixing microbes.”