It is predicted that global average temperatures will have risen by between 0.9 and 2.0 ºC around the middle of this century, according to the IPCC’s intermediate emission scenario RCP4.5. As a result, many species, especially specialists with highly specific requirements for food, habitat, and reproduction, won’t be able to adapt. 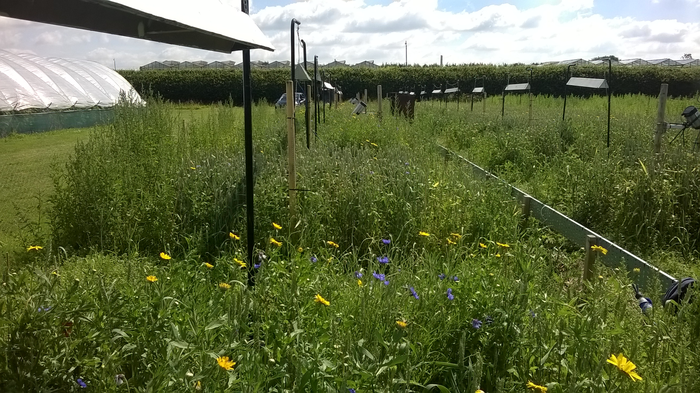 It is predicted that global average temperatures will have risen by between 0.9 and 2.0 ºC around the middle of this century, according to the IPCC’s intermediate emission scenario RCP4.5. As a result, many species, especially specialists with highly specific requirements for food, habitat, and reproduction, won’t be able to adapt.

Because approximately 35% of our crops depend on insects for pollination, it is necessary to study impact of global warming on the fitness of insects and the wildflowers on which they depend for food. Once we understand the likely changes, we may be able to mitigate the negative effects for wild and crop plants.

Here, a study by scientists from Newcastle University in the UK is the first to show experimentally the immediate effects of simulated climate change on the reproductive success of wildflowers, as well on the food web of plants and pollinators. The results are published in Frontiers in Plant Science.

Lead author Dr Ellen D Moss, a postdoctoral scientist in the School of Natural and Environmental Sciences at Newcastle University, said: “Here we show that a 1.5°C increase in temperature can drastically reduce food resources for pollinating insects, cause pollinators to visit a wider range of plants for food, and reduce seed production for some wildflowers, while increasing it for others.”

Simulating global warming in the wild

The authors simulated global warming on outdoor experimental plots at an agricultural research station in the UK, by raising the ambient temperature by a constant 1.5 ºC with infrared heaters. They then compared plant and insect biodiversity, and visiting patterns of insects on the flowers, between these and unheated control plots across 2014 and 2015.

Because climate change in northern Europe is also predicted to lead to an increase in rainfall, they further looked at the effect of irrigating plots with extra water (supplying 40% of the local monthly rainfall on top of the natural precipitation), both in combination with and separately from heating.

Between the years, the plots were plowed, and sown in the spring with wheat and eight species of native, annual, insect-pollinated herbs typical of wheat fields, such as corn marigold and cornflower. No pesticides were applied, which also allowed local wildflowers to colonize the plots and flower.

“Our experiment showed that under an increase of 1.5°C there was almost a 40% reduction in the number of floral units throughout the season, which represents a significant decrease in available food for flower visitors,” the authors wrote.

A lone ‘winner’ in reproductive terms under simulated climate change was the wildflower common field-speedwell, which produced more and heavier seeds in heated plots. However, its flowers secreted 65% less nectar in heated plots, making this species less rewarding for pollinators.

The researchers also observed subtle, immediate changes in the food web. For example, the food web was more complex in the heated plots, because insect species tended to visit a greater number of plant species, while the number of visits per flower was increased. This change in insect foraging behavior was likely caused by the reduction in available food. And while the number of recorded species was unaffected by heating or extra water, the composition of both the plant and insect communities was significantly different between the treatments.

“Our results demonstrate that climate warming could have severe consequences for some species of wildflowers and their pollinators in agricultural systems, and shows that their community composition is likely to change in the future,” said Moss.

“Going forward, having a better understanding of how climate warming affects the direct and indirect actions of a more complete network of species interactions will better enable us to adapt our farming systems in a changing world.”