About the size of a small school bus, the basking shark is the second largest fish in the ocean and is found in temperate and tropical waters across the globe. In the mid-1900s, basking sharks were observed by the thousands each year off California’s coast. Now they are rarely seen at all in this region, called the California Current Ecosystem, or CCE. 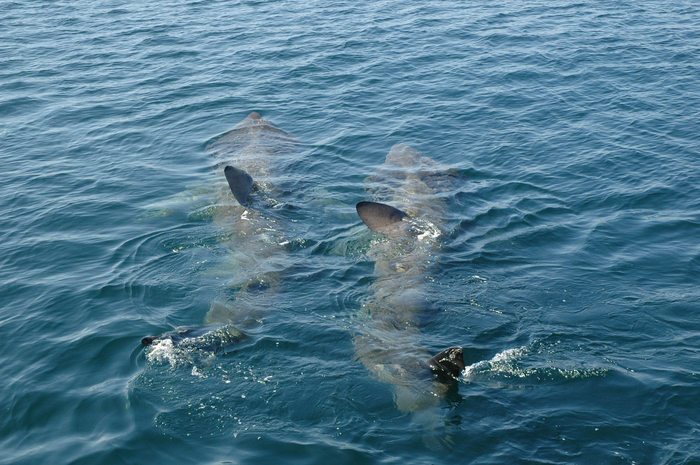 About the size of a small school bus, the basking shark is the second largest fish in the ocean and is found in temperate and tropical waters across the globe. In the mid-1900s, basking sharks were observed by the thousands each year off California’s coast. Now they are rarely seen at all in this region, called the California Current Ecosystem, or CCE.

A study from the University of California, Davis, and NOAA Fisheries’ Southwest Fisheries Science Center confirms a striking decrease in basking shark sightings in the CCE after the 1970s and 1980s and examines what is driving their presence and distribution. The work is published in the journal Frontiers in Marine Science.

The findings hold implications for the global conservation of basking sharks, which are classified as endangered by the International Union for Conservation of Nature’s Red List.

Very little is known about basking sharks, including how long they live, where they mate or where they give birth. Population assessments have not been conducted in the CCE, which stretches from Baja to British Columbia, and there is no formal monitoring effort around the species. But what data exists serves as a red flag that the species warrants further investigation.

“They are a rare sight,” said lead author Alexandra McInturf, a Ph.D. candidate with the UC Davis Department of Wildlife, Fish and Conservation Biology at the time of the study and currently a postdoctoral fellow at Oregon State University. “We want to know why the declines are happening. Is it climate change? Human-induced pressures? What environmental cues do they respond to and how might that change in the future?”

For this study, the authors examined the longest dataset available — systematic aerial surveys for small fish conducted by NOAA Fisheries between 1962 and 1997, and additional sources between 1973 and 2018 that include fisheries data, tagging and research efforts and public observations.

Aerial surveys sighted a maximum of 4,000 basking sharks in 1965. After the 1990s, no sightings were reported. Additional sources reported less than 100 sightings per year after 1990. School sizes also declined by about half between the 1960s and 1980s, from 57 to 24 individuals per group. In the decades following, no schools larger than 10 were reported.

“While the aerial surveys were focused on small fish, the survey also collected data on basking sharks, which turned out to be invaluable,” said co-author Heidi Dewar, who oversees the project for Southwest Fisheries Science Center. “Currently, fishing for basking sharks is prohibited in the U.S., Mexico and Canada. The hope is that with these protections in place, the population will recover. Additional work to understand the sources of mortality in international waters is also needed.”

The study also found a significant shift in when sightings occurred — from fall and spring in earlier years of the surveys to the summer months after the 2000s.

What’s driving these trends is still unclear, although researchers found a significant link between shark presence and environmental factors, such as sea surface temperature, prey presence, El Niño and other climatic oscillations.

The study notes a lack of monitoring may also play a role in reduced sightings and that more research is needed to characterize their full range.

The study concludes with suggestions for conservation of the species, noting that coastal areas from Monterey Bay to Baja California remain important habitat for basking sharks. The suggestions include:

McInturf said increased public awareness of the sharks may also help. For instance, they are susceptible to ship strikes as they feed on the surface, so boater education is an important part of their conservation.

How to identify a basking shark

Basking sharks, with their massive mouths and bodies, were once thought to be sea monsters and have been mistaken for great white sharks due to their similar body structure.

“We get questions like, ‘Can they swallow a person?’” said McInturf. “No, their throats are too small.”

The basking shark has much smaller prey in mind. Like whales, it filter-feeds on tiny phytoplankton to fill its sizable belly.

To identify a basking shark, a big dorsal fin is a key giveaway, and a second smaller dorsal fin may also be visible. As they feed, their tail or nose may surface. And unlike most sharks’ more direct swimming pattern, basking sharks tend to zig-zag or snake through the water.

After three seasons of field work in Ireland to study basking sharks, McInturf has seen them only once, breaching out of the water.

“That tells you what it’s like to work with basking sharks,” McInturf said. “I would love to see them in the water again. I’ve spent so much time looking for them, and they’ve been incredibly hard to find.”