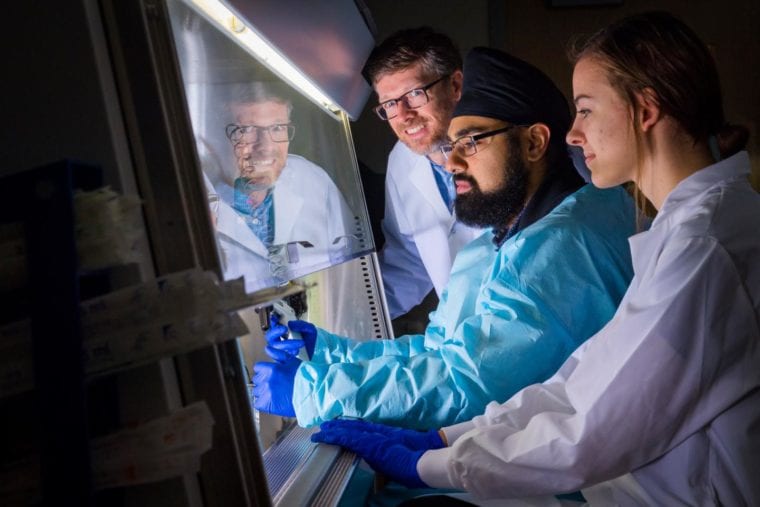 The immune system is the body’s best defense in fighting diseases like HIV and cancer. Now, an international team of researchers is harnessing the immune system to reveal new clues that may help in efforts to produce an HIV vaccine.

SFU professor Mark Brockman and co-authors from the University of KwaZulu-Natal in South Africa have identified a connection between infection control and how well antiviral T cells respond to diverse HIV sequences.

Brockman explains that HIV adapts to the human immune system by altering its sequence to evade helpful antiviral T cells.

“So to develop an effective HIV vaccine, we need to generate host immune responses that the virus cannot easily evade,” he says.

“T cells are white blood cells that can recognize foreign particles called peptide antigens,” says Brockman. “There are two major types of T cells–those that ‘help’ other cells of the immune system, and those that kill infected cells and tumours.”

He explains that for a T cell to recognize a peptide antigen, the antigen must first be presented on the cell surface by human leukocyte antigen proteins (HLA), which are are inherited.

And since many thousands of possible HLA variants exist in the human population, every person responds differently to infection. In addition, since HIV is highly diverse and evolves constantly during untreated infection, the peptide antigen sequence also changes.

Matching T cells against the HLA variants and HIV peptide antigens expressed in an individual is a critical step in the routine research process. But, says Brockman, “our understanding of T cell responses will be incomplete until we know more about the antiviral activity of individual T cells that contribute to this response.”

It is estimated that a person’s T cell “repertoire” is made up of a possible 20-100 million unique lineages of cells that can be distinguished by their T cell receptors (TCR), of which only a few will be important in responding to a specific antigen.

So to reduce the study’s complexity, the team examined two highly related HLA variants (B81 and B42) that recognize the same HIV peptide antigen (TL9) but are associated with different clinical outcomes following infection.

Notably, a group of T cells in some B42-expressing individuals displayed a greater ability to recognize TL9 sequence variants. The presence of these T cells was associated with better control of HIV infection.

This study demonstrates that individual T cells differ widely in their ability to recognize peptide variants and suggests that these differences may be clinically significant in the context of a diverse or rapidly evolving pathogen such as HIV.

Much work needs to be done to create an effective vaccine. However, says Brockman, “Comprehensive methods to assess the ability of T cells to recognize diverse HIV sequences, such as those reported in this study, provide critical information to help design and test new vaccine strategies.”

The full study can be read in Nature Communications.

As Canada’s engaged university, SFU is defined by its dynamic integration of innovative education, cutting-edge research and far-reaching community engagement. SFU was founded more than 50 years ago with a mission to be a different kind of university–to bring an interdisciplinary approach to learning, embrace bold initiatives, and engage with communities near and far. Today, SFU is Canada’s leading comprehensive research university and is ranked one of the top universities in the world. With campuses in British Columbia’s three largest cities – Vancouver, Burnaby and Surrey – SFU has eight faculties, delivers almost 150 programs to over 35,000 students, and boasts more than 150,000 alumni in 130 countries around the world.

The trials of turfgrass breeders

Scienmag Feb 27, 2019
Study reveals important insight regarding breeding and distribution practices and management in the turfgrass…