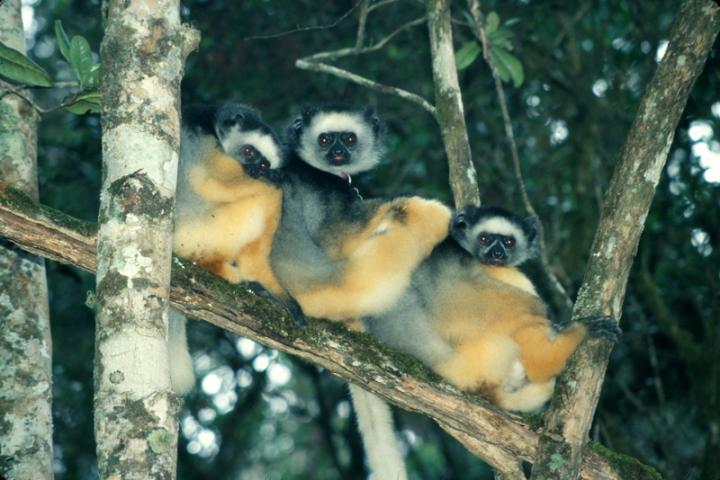 DeKalb, Ill. — A new study led by Mitch Irwin and Karen Samonds of Northern Illinois University finds that degraded rainforest habitats are having an unhealthy impact on at least one species of Madagascar’s treasured lemurs, the most endangered mammal group in the world.

Irwin, Samonds and other research team members captured, measured and released 113 critically endangered diademed sifakas over the course of 19 years. They then compared the health of the animals living in intact continuous rainforest versus those in habitats disturbed and fragmented by human encroachment.

Working with a veterinarian to ensure animal safety, the scientists recorded the body mass, length and body condition of the stunning silken-furred primates, which grow to be roughly a meter in length and weigh in at about 6.5 kilograms. The results actually revealed that sifakas in some fragmented rainforest environments were doing fine–their bodies were identical to those animals in the richest environments.

But significant differences were found in the two most disturbed habitats.

“Below a critical threshold in the most degraded of all fragments, there were key differences–adults were skinnier, and the growth of immatures was delayed both in their height and weight,” said Irwin, an NIU professor of anthropology and lead author of the study. The study was published June 19 in Scientific Reports, an open access journal of the Nature Research family.

Notably, the 11 lemurs living in the three lowest-quality habitats, representing three separate groups of the animals, died or disappeared during the study duration. The authors said it is unclear whether the habitats will be recolonized.

“Although anecdotal, the loss of these three groups would seem to corroborate the interpretation that their health was impacted by their low-quality habitat,” Irwin said. “It’s sad to actually witness a species’ range shrink – it’s a small step toward extinction.”

For groups of sifakas in the remaining fragmented areas, both nutritional inputs and body measurements showed little distinction from groups living in optimal continuous forest, despite a noticeable degree of habitat fragmentation and disturbance.

“This suggests substantial resilience to moderate levels of habitat change,” Irwin said. “If no further degradation occurs, the remaining long-term viability of groups in these fragmented areas may depend more on whether juveniles can disperse to find new groups than on nutritional inputs. If they are stuck in small isolated fragments they may die out due to inbreeding.”

The study also presents the first detailed data on body proportions and dimensions of wild diademed sifakas. The animals are among the largest living lemur varieties, live in groups of two to 10 individuals and have life spans that typically exceed 20 years. Foliage is usually the major component of sifaka diets, although fruits and seeds can play a major role.

“Sifakas are long-lived animals, so they may not rapidly go extinct in these degraded habitats, but over time these threats can add up and cause these populations to be lost,” Irwin said. “This research not only helps identify which groups are at risk, but identifies ways to monitor their health directly through these measurements of size and growth.”

The study was conducted on sifakas living in Madagascar’s Tsinjoarivo forest, part of the newly-created Tsinjoarivo-Ambalaomby protected area. Located 80 kilometers south and southeast of the capital city of Antananarivo, the rainforest is home to many spectacular varieties of lemurs, a group of primates only found in the island country.

Its preservation is being spearheaded by the NGO SADABE, a Malagasy organization created by Irwin and Samonds with Malagasy colleagues. Each year, Irwin and Samonds, a husband-and-wife team of scientists, spend a large portion of their summer conducting research in the region.

Though the Malagasy care deeply for the forest, limited economic options in poor rural areas often lead to uncontrolled and unsustainable natural resource exploitation. Over roughly the past 35 years, much of Tsinjoarivo’s forests were turned to agricultural plots and trees chopped down for lumber, disturbing habitats. The rainforest’s western half has been fragmented and degraded by settlers, while the eastern half is minimally disturbed.

Many studies have examined how human-caused habitat change can affect wildlife populations. But wild animals, especially highly intelligent primates, are very flexible. “They can change their diet and movement patterns to respond to changing conditions,” Irwin said. “You really need direct indicators of health to know if those changes reflect an underlying threat to the population.”

Samonds and Irwin continue to collect data this summer.

“For this kind of research, you need a long-term database,” said Samonds, an NIU professor of biological sciences. “Basic health parameters such as body size and condition are perhaps the best tools for judging population viability, but getting the measurements typically requires captures, which are often challenging.”

Other authors on the new study are Jean-Luc Raharison and Karine Lalaina Mahefarisoa of the nonprofit SADABE Madagascar organization; Randall Junge of the Columbus Zoo and Aquarium in Ohio; Fidisoa Rasambainarivo of Mahallana Labs in Madagascar; Laurie Godfrey of the University of Massachusetts, Amherst; and Kenneth Glander of Duke University.