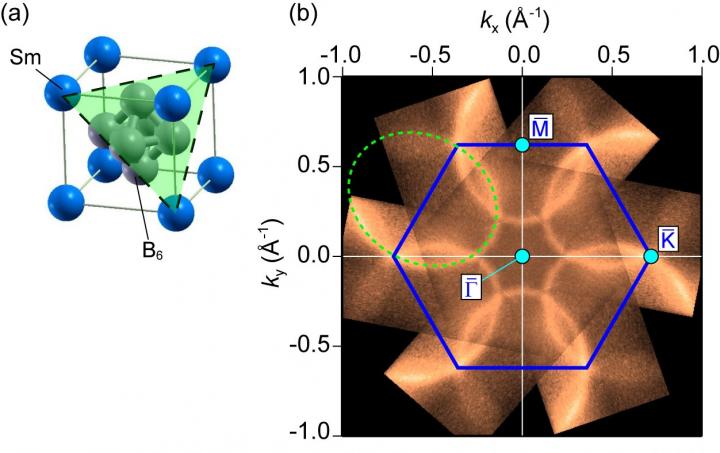 Osaka, Japan – A team led by Osaka University used angle-resolved photoelectron spectroscopy to probe the unusual surface conductivity of samarium hexaboride crystals. They showed that the material is a co-existing phase of “topological insulator” in which electrical current can flow along the surface but not through the bulk of the sample, a “Kondo insulator”, which undergoes a metal-to-insulator transition due to the strong electron correlation. This work, which demonstrates that topological insulators can simultaneously have strong electron correlations, may allow for the development of quantum spin devices that use the magnetic spins of individual electrons to outperform current computers.

A long-standing debate has existed regarding the metallic surface electronic structure of samarium hexaboride (SmB6). SmB6 is known to be an insulator only at low temperatures due to strong electron correlations, called the “Kondo effect.” Unlike most materials, the resistance in Kondo insulators actually increases with decreasing temperature. However, the origin of the remnant conductivity at low temperatures has not yet been revealed. A popular hypothesis is that SmB6 is also a topological insulator, which can have metallic electronic states on its surface. However, the surface electronic structures of SmB6 obtained so far have been complex and difficult to interpret and thus this question of whether or not SmB6 is indeed topological has been a long-standing debate. In this work, the team observed the surface states from a new crystal orientation and succeeded in significantly simplifying the surface states.

The main insight was measuring along a particular surface direction, which had previously been difficult to do. To obtain this surface, the researchers first had to prepare an atomically flat, extremely clean surface of the crystal in a very precise manner. They accomplished this by heating a single crystal of samarium hexaboride to very high temperatures in an ultra-high vacuum chamber. They then performed angle-resolved photoelectron spectroscopy, which monitors the electrons ejected from the crystal when exposed to intense beams of light. Using a ferromagnetic detector, they were able to determine not only the speeds of the electrons, but also if they had their spins oriented up or down. “We were able to show that samarium hexaboride is a topological insulator, without any ambiguity,” says lead author Shin-ichi Kimura. “This opens a new research area in which strong correlations and topological effects can exist in the same material.”

Cognitive behavioral therapy delivered by telemedicine is effective for insomnia