Settling the debate on serotonin’s role in sleep

The brain chemical is necessary to get enough sleep 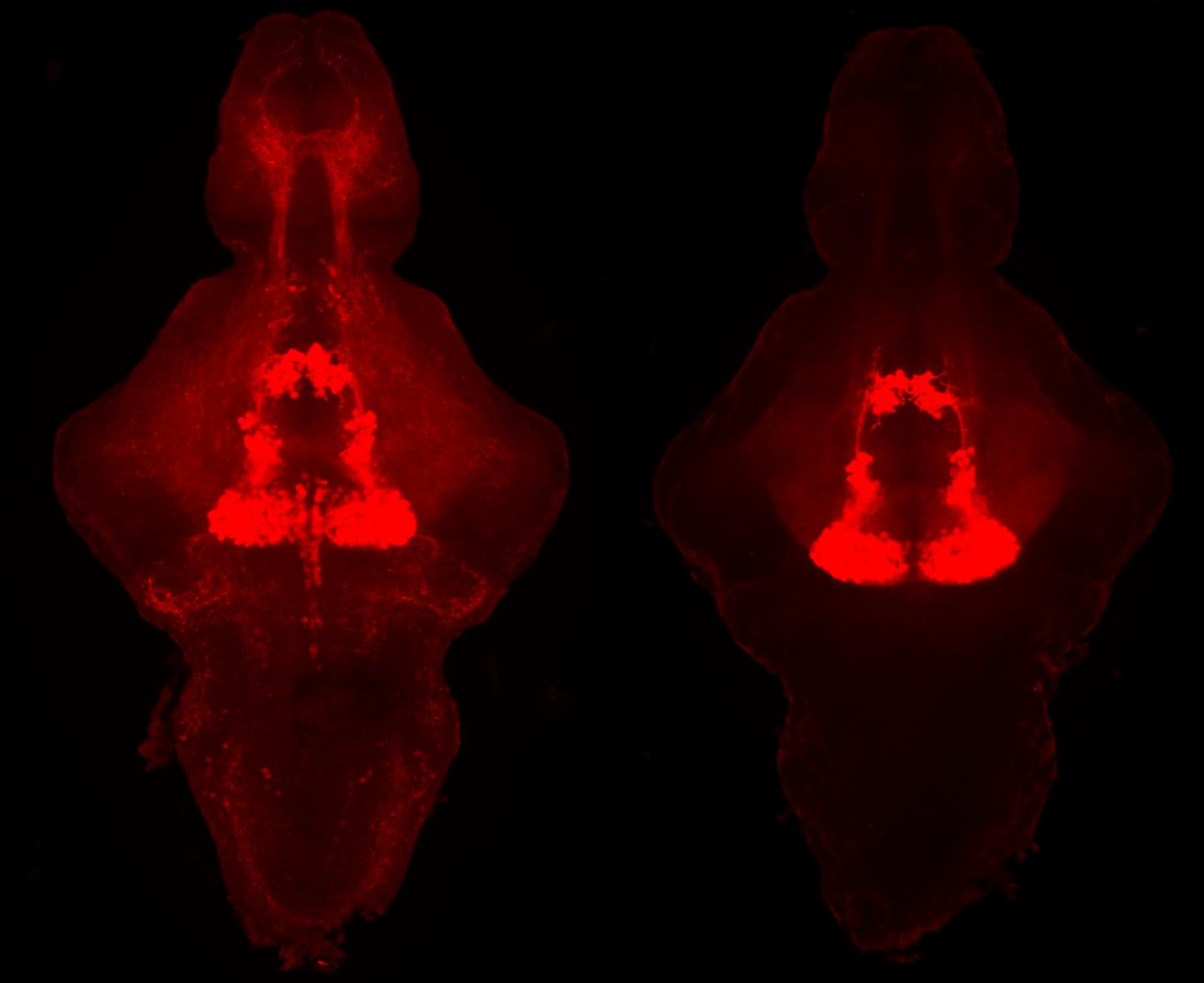 Serotonin is a multipurpose molecule found throughout the brain, playing a role in memory, cognition, and feelings of happiness and other emotions. In particular, researchers have long debated serotonin’s role in sleep: Does serotonin promote sleep, or its opposite, wakefulness?

Now, Caltech scientists have found that serotonin is necessary for sleep in zebrafish and mouse models.

A paper describing the research appears online on June 24 in the journal Neuron. The work is a collaboration between the Caltech laboratories of David Prober, professor of biology and affiliated faculty member of the Tianqiao and Chrissy Chen Institute for Neuroscience at Caltech; and Viviana Gradinaru (BS ’05), professor of neuroscience and biological engineering, Heritage Medical Research Institute Investigator, and director of the Chen Institute’s Center for Molecular and Cellular Neuroscience.

In order to settle this debate, the Caltech team focused on a region called the raphe nuclei, which has the brain’s main population of serotonin-producing (or serotonergic) neurons. The raphe are evolutionarily ancient structures found in the brain stem of a wide range of organisms from fish to humans, and they are responsible for both manufacturing and sending out serotonin to other brain regions.

Led by senior postdoctoral scholar Grigorios Oikonomou of the Prober lab, the research began using zebrafish, tiny transparent fish that are widely used as a model to study sleep. Like humans, zebrafish larvae are diurnal–meaning that their sleep occurs mostly at night.

First, the researchers genetically mutated zebrafish so that their raphe did not produce serotonin. These mutant fish, the team found, slept about half as much as normal fish. In another experiment, the researchers removed the raphe altogether, and these fish also slept much less than usual.

“This suggests that serotonin produced by the raphe is required for the fish to get normal amounts of sleep,” says Oikonomou.

In a third set of experiments, zebrafish were genetically modified so that their raphe could be activated by light. Shining a light on these fish put them to sleep, implying that activation of the raphe induces sleep. This effect requires serotonin, because activating the raphe in fish that do not synthesize serotonin had no effect on sleep.

The team from the Prober laboratory then collaborated with scientists in the Gradinaru laboratory to continue the serotonin studies in mice. Led by graduate student Michael Altermatt, the team examined serotonergic neurons in the mouse raphe and confirmed that they are indeed mostly active while the animals are awake and less active during sleep, in agreement with previous studies.

As Prober’s lab did in zebrafish, the Gradinaru lab’s team genetically removed the serotonergic neurons in the mouse raphe and found that the mice slept less than usual. Stimulating these neurons with light also put the mice to sleep but only when the light was administered at frequencies that are consistent with the naturally occurring baseline activity pattern of these neurons during wakefulness.

“There’s an obvious paradox here: stimulating the neurons causes the animals to sleep, and yet the neurons are normally active during the day,” says Altermatt.

Oikonomou explains: “There are two main factors that control sleep. One is the circadian clock–when it is light during the day, the body is awake, and when it gets dark, the body knows to sleep. The other factor is called homeostatic sleep pressure. When you wake up in the morning, you have just gotten rest, and so you’re energetic. As the day goes on, you get tired and sleepy, so there is a building of pressure to sleep. If you don’t sleep that night, your sleep pressure is even higher, and you are even more tired the next day even though it’s light outside, and your circadian clock dictates that you should be awake.”

“The theory is that, in order to sleep, you need to have high sleep pressure and the circadian clock needs to be aligned with the time of day–nighttime for diurnal creatures like us and daytime for nocturnal animals.”

The researchers theorize that the firing of neurons in the raphe and their release of serotonin is a way for the brain to build up sleep pressure. Indeed, they found that zebrafish lacking serotonin as well as mice with ablated raphe show reduced sleep pressure.

While the studies were in animal models, the raphe region and its production of serotonin are similar in human brains. The research can contribute to explanations of some sleep-related side effects of common antidepressant drugs that increase serotonin levels in the brain.

The paper is titled “The Serotonergic Raphe Promote Sleep in Zebrafish and Mice.” Additional co-authors are postdoctoral scholar Rong wei Zhang, graduate student Gerard M. Coughlin, and former graduate student Christin Montz (MS ’12). Funding was provided by the National Institutes of Health; the Center for Molecular and Cellular Neuroscience of the Tianqiao and Chrissy Chen Institute for Neuroscience at Caltech; the CLARITY, Optogenetics and Vector Engineering Research Center of Caltech’s Beckman Institute; the National Science and Engineering Research Council of Canada; and the Heritage Medical Research Institute.

A solarium for hens? How to increase the vitamin D content of eggs

Young athletes who require ACL reconstruction may benefit from additional…