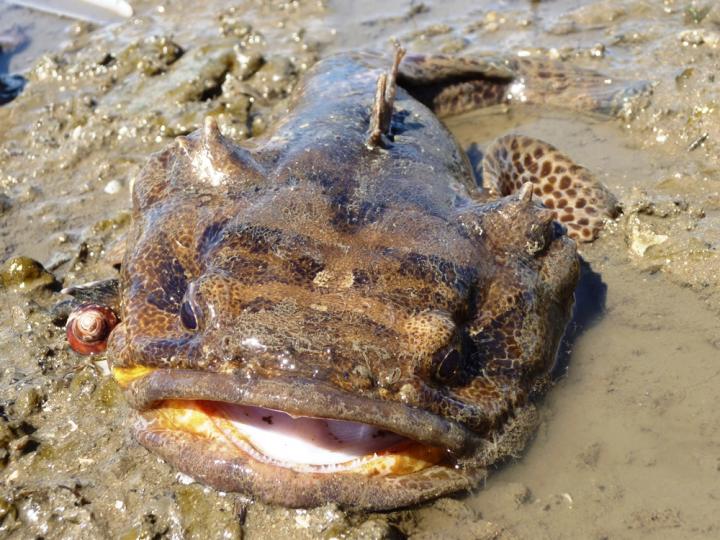 During spring, Lusitanian toadfish (Halobatrachus didactylus) suitors form choirs in Portugal’s Tagus estuary to serenade the females, vibrating their swim bladders to produce a call, known as a boatwhistle, which sounds like a vibrating cell phone. The males also listen in on each other to check whether anyone is intruding on their territory. But sadly, their performances are no longer conducted in hushed reverence. Revving motorboats and churning ferry propellors and engines fill the water with unwelcome noise, which made Clara Amorim, Daniel Alves, Manuel Vieira and Paulo Fonseca, from the Universidade de Lisboa, Portugal, wonder whether human noise pollution is playing havoc with the garrulous fish’s ability to communicate. They publish their discovery that toadfish serenades are being drowned out by water traffic that also disrupts their ability to croon together in Journal of Experimental Biology at https://journals.biologists.com/jeb.

‘We had previously measured how far toadfishes could communicate with each other’, says Alves, who worked with local fisherman to collect the vocal fish. Once the fish were comfortable in the lab, Alves and Fonseca tested their hearing by playing boatwhistles – which had been recorded at distances from 0.1-15 m – while logging the fishes’ brainwaves as they listened to the sound against a silent background. Then, the duo added the whine of an outboard motor or a rumbling ferryboat and rechecked the brainwaves, to find out whether the fish were still able to hear the serenades.

Unfortunately, the outboard motor almost completely drowned out the recordings of the males. One boatwhistle that had been clear up to 10.4 m away in absolute silence became inaudible over distances of more than 2.5 m and the range of another toadfish rumble fell to just 2.0 m. However, the ferryboat seemed to have less of an impact on the toadfishes’ hearing, cutting the range over which one boatwhistle could be heard by 4 m, to 6.3 m, while the other, which had been so badly affected by the outboard motor, could be heard over slightly longer distances (6.7 m). Water traffic is clearly affecting the ability of these vocal fish to hear one another, but does the sound of passing vessels affect how harmonising toadfish croon together?

To find out, Vieira, Amorim and Fonseca crossed the Tagus to a quiet toadfish breeding ground, providing the serenading residents with 12 custom-built concrete nests, each equipped with an underwater microphone to record their boatwhistles as they settled into duetting with nearby males to attract females. In peaceful waters, the neighbours coordinated well, slightly advancing or delaying their responses to each other’s calls depending on their proximity. However, when the scientists played recordings of passing ferries and motorboats to the courting males, the toadfishes’ coordination broke down entirely, with serenading duetters interjecting more randomly between their neighbour’s timed rumbles.