Separating natural and man-made pollutants in the air

What COVID-19’s lockdown to prevent infection taught us 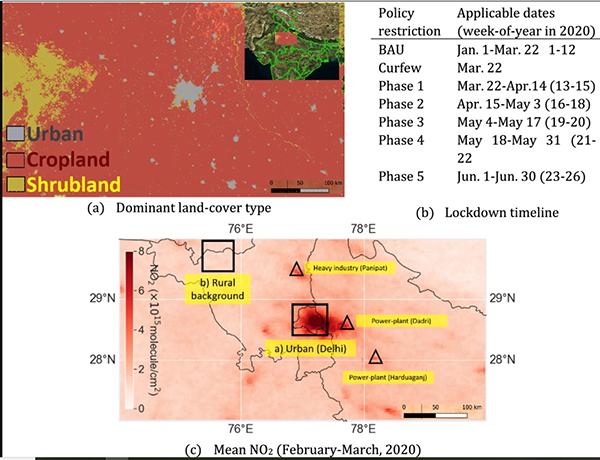 COVID-19 has changed the world in unimaginable ways. Some have even been positive, with new vaccines developed in record time. Even the extraordinary lockdowns, which have had severe effects on movement and commerce, have had beneficial effects on the environment and therefore, ironically, on health. Studies from all around the world, including China, Europe and India, have found major drops in the level of air pollution. However, to fully understand the impact of anthropogenic causes, it is important to separate them from natural events in the atmosphere like wind flow.

To demonstrate this point, a new study by researchers at the Research Institute for Humanity and Nature, Japan, uses satellite data and mathematical modeling to explain just how great the lockdown effect on nitrogen oxides has been in Delhi, India, one of the world’s most polluted cities, and its surrounding area. This study was carried out under the activity named “Mission DELHIS (Detection of Emission Change of air pollutants: Human Impact Studies)” as a part of RIHN project, Aakash (meaning “Sky” in Hindi, originated from sanskrit) (https://www.chikyu.ac.jp/rihn_e/covid-19/topics.html#topics6).

“Nitrogen oxides are good chemical tracers for testing model hypothesis, because besides their health effects, they have a short lifetime. Therefore, it is unlikely wind will bring nitrogen oxides from far away.” explains Professor Sachiko Hayashida, who led the study.

Nitrogen oxides naturally change due to dynamic and photochemical conditions in the atmosphere, and are emitted from the Earth’s surface by both natural and anthropogenic activities. Therefore, Hayashida argues, looking simply at their concentration levels in the atmosphere provides only a crude impression of man-made contributions.

“COVID-19 pandemic has given us an opportunity of social experiment, when we can discriminate the anthropogenic effects on nitrogen oxides from the natural ones caused by atmospheric conditions and natural emissions, because only anthropogenic emissions decreased due to the lockdown. These confounders affect policy to control air quality” she says.

Strict lockdown was enforced in Delhi for two months in 2020, from the end of March to the end of May. This period coincides with the transition in atmospheric conditions, such as actinic flux, from low in spring to high in early summer, and also from stagnant winds to high ventilation across the entire northern India region.

The researchers analyzed seasonal and inter-annual changes using multi-year satellite data to predict what the levels would be had there been no lockdown. They estimated top-down emissions using a steady-state continuity equation. The study’s findings clearly show that the natural conditions could not explain the dramatic drop in 2020 nitrogen oxide levels. Not even close.

“Our calculations suggested that 72% of nitrogen oxides emissions in urban centres are the resulted solely from traffic and factories,” said Hayashida.

Hayashida says that her team’s approach should have an impact on how we study harmful chemical species emitted to the atmosphere.

“Our findings show the importance of analyzing top-down emissions and not just atmospheric concentrations. We expect our approach to guide effective policy on air pollution,” she said.