The Black Death was the single greatest mortality event in recorded history, killing up to 50% of the European population in less than five years. New research from the University of Chicago, McMaster University, and the Institut Pasteur has found evidence that one of the darkest periods in recorded human history placed a significant selective pressure on the human population, changing the frequency of certain immune-related genetic variants and affecting our susceptibility to disease today. The results were published on October 19 in Nature. 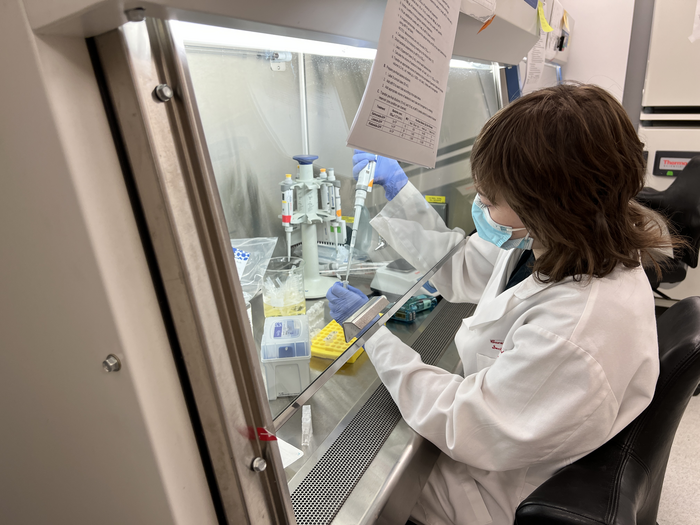 The Black Death was the single greatest mortality event in recorded history, killing up to 50% of the European population in less than five years. New research from the University of Chicago, McMaster University, and the Institut Pasteur has found evidence that one of the darkest periods in recorded human history placed a significant selective pressure on the human population, changing the frequency of certain immune-related genetic variants and affecting our susceptibility to disease today. The results were published on October 19 in Nature.

Caused by the bacterium Yersinia pestis, the global pandemic of the bubonic plague wiped out 30% to 60% of people in cities across North Africa, Europe, and Asia, with massive repercussions for the human race — and, apparently, our genome.

“This was a very direct way to evaluate the impact that a single pathogen had on human evolution,” said Luis Barreiro, PhD, Professor of Genetic Medicine at UChicago and co-senior author on the study. “People have speculated for a long time that the Black Death might be a strong cause of selection, but it’s hard to demonstrate that when looking at modern populations, because humans had to face many other selective pressures between then and now. The only way to address the question is to narrow the time window we’re looking at.”

In the study, thanks to recent advances in sequencing technology, the scientists examined ancient DNA samples from the bones of over 200 individuals from London and Denmark who died before, during, and after the Black Death plague swept through the region in the late 1340s. Using targeted sequencing for a set of 300 immune-related genes, they identified four genes that, depending on the variant, either protected against or increased susceptibility to Y. pestis.

“This is, to my knowledge, the first demonstration that indeed, the Black Death was an important selective pressure to the evolution of the human immune system,” said Barreiro.

The research team zeroed in on one gene with a particularly strong association to susceptibility: ERAP2. Individuals who possessed two copies of one specific genetic variant, dubbed rs2549794, were able to produce full length copies of the ERAP2 transcript, therefore producing more of the functional protein, compared to another variant that led to a truncated and non-functional version of the transcript. Functional ERAP2 plays a role in helping the immune system recognize the presence of an infection.

“When a macrophage encounters a bacterium, it chops it into pieces for them to be presented to other immune cells signaling that there’s an infection,” said Barreiro. “Having the functional version of the gene, appears to create an advantage, likely by enhancing the ability of our immune system to sense the invading pathogen. By our estimate, possessing two copies of the rs2549794 variant would have make a person about 40% more likely to survive the Black Death than those who had two copies of the non-functional variant.”

The team even went so far as to test how the rs2549794 variant affected the ability of living human cells to help fight the plague, determining that macrophages expressing two copies of the variant were more efficient at neutralizing Y. pestis compared to those without it.

“Examining the effects of the ERAP2 variants in vitro allows us to functionally test how the different variants affect the behavior of immune cells from modern humans when challenged with living Yersinia pestis,” said Javier Pizarro-Cerda, PhD, head of the Yersinia Research Unit and director of the World Health Organization Collaborating Centre for Plague at Institut Pasteur. “The results support the ancient DNA evidence that rs2549794 is protective against the plague.”

The team further concluded that the selection for rs2549794 is part of the balancing act evolution places upon our genome; while ERAP2 is protective against the Black Death, in modern populations, the same variant is associated with an increased susceptibility to autoimmune diseases, including acting as a known risk factor for Crohn’s disease.

“Diseases and epidemics like the Black Death leave impacts on our genomes, like archeology projects to detect,” said Hendrik Poinar, PhD, Professor of Anthropology at McMaster University and co-senior author on the study. “This is a first look at how pandemics can modify our genomes but go undetected in modern populations. These genes are under balancing selection — what provided tremendous protection during hundreds of years of plague epidemics has turned out to be autoimmune related now. A hyperactive immune system may have been great in the past but in the environment today it might not be as helpful.”

Future research will scale the project to examine the entire genome, not just a selected set of immune related genes; and the team hopes to explore genetic variants that affect susceptibility to bacteria in modern humans and compare them to these ancient DNA samples to determine if those variants were also a result of natural selection.

“There is a lot of talk about how pathogens have shaped human evolution, so being able to formally demonstrate which pathways and genes have been targeted really helps us understand what allowed humans to adapt and exist today,” said Barreiro. “This tells us about the mechanisms that allowed us to survive throughout history and why we’re still here today.”

The University of Chicago Medicine, with a history dating back to 1927, is one of the nation’s leading academic health systems. It unites the missions of the University of Chicago Medical Center, Pritzker School of Medicine and the Biological Sciences Division. Twelve Nobel Prize winners in physiology or medicine have been affiliated with the University of Chicago Medicine. Its main Hyde Park campus is home to the Center for Care and Discovery, Bernard Mitchell Hospital, Comer Children’s Hospital and the Duchossois Center for Advanced Medicine. It also has ambulatory facilities in Orland Park, South Loop, Homewood and River East as well as affiliations and partnerships that create a regional network of care. UChicago Medicine offers a full range of specialty-care services for adults and children through more than 40 institutes and centers including an NCI-designated Comprehensive Cancer Center. Together with Harvey-based Ingalls Memorial, UChicago Medicine has 1,296 licensed beds, nearly 1,300 attending physicians, over 2,800 nurses and about 970 residents and fellows.

Evolution of immune genes is associated with the Black Death