The icefields that stretch for hundreds of miles atop the Andes mountain range in Chile and Argentina are melting at some of the fastest rates on the planet. The ground that was beneath this ice is also shifting and rising as these glaciers disappear. Geologists have discovered a link between recent ice mass loss, rapid rock uplift and a gap between tectonic plates that underlie Patagonia. 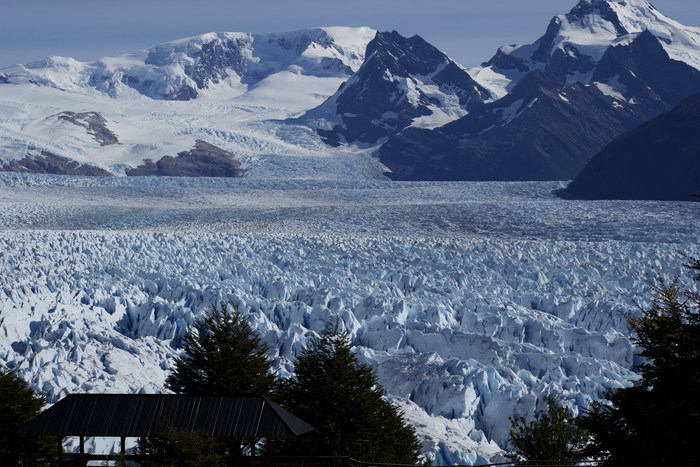 The icefields that stretch for hundreds of miles atop the Andes mountain range in Chile and Argentina are melting at some of the fastest rates on the planet. The ground that was beneath this ice is also shifting and rising as these glaciers disappear. Geologists have discovered a link between recent ice mass loss, rapid rock uplift and a gap between tectonic plates that underlie Patagonia.

Scientists at Washington University in St. Louis, led by seismologist Douglas Wiens, the Robert S. Brookings Distinguished Professor in Arts & ­Sciences, recently completed one of the first seismic studies of the Patagonian Andes. In a new publication in the journal Geophysical Research Letters, they describe and map out local subsurface dynamics.

“Variations in the size of glaciers, as they grow and shrink, combined with the mantle structure that we’ve imaged in this study are driving rapid and spatially variable uplift in this region,” said Hannah Mark, a former Steve Fossett postdoctoral fellow in earth and planetary sciences at Washington University, the first author of the publication. Mark is now a postdoctoral investigator at the Woods Hole Oceanographic Institution.

The seismic data that Mark and Wiens analyzed reveals how a gap in the down-going tectonic plate about 60 miles beneath Patagonia has enabled hotter, less viscous mantle material to flow underneath South America.

Above this gap, the icefields have been shrinking, removing weight that previously caused the continent to flex downward. The scientists found very low seismic velocity within and around the gap, as well as a thinning of the rigid lithosphere overlying the gap.

These particular mantle conditions are driving many of the recent changes that have been observed in Patagonia, including the rapid uplift in certain areas once covered by ice.

“Low viscosities mean that the mantle responds to deglaciation on the time scale of tens of years, rather than thousands of years, as we observe in Canada for example,” Wiens said. “This explains why GPS has measured large uplift due to the loss of ice mass.

When glaciers melt, a tremendous weight is lifted from the ground that once supported them. Huge amounts of water, previously stored as ice, flows toward the oceans. The newly unburdened earth rebounds and rises.

Geologists see evidence of this combination of ice mass changes and uplift in places all over the world.

The ongoing movement of land — what is known as ‘glacial isostatic adjustment’ — matters for a lot of reasons, but especially because it affects predictions for sea level rise under future climate warming scenarios.

Mark said that one of the most interesting things they discovered in this study was that the hottest and least viscous parts of the mantle were found in the region of the gap, or slab window, below the part of the Patagonia icefields that had opened up most recently.

“This suggests to us that maybe the mantle dynamics associated with the slab window may have intensified over time, or that the continental plate in the south started out thicker and colder and so was less affected by the slab window than the part of the plate farther north,” Mark said.

Patagonia is a remote area that is not densely populated, and earthquake hazards are relatively low — which helps explain why few seismic studies have been conducted in this area in the past, Wiens said. The data he and his team collected is already being used for purposes beyond this mantle imaging effort.

Wiens first visited Patagonia more than 25 years ago. He said that he is shocked by changes that he has observed in his lifetime.

“The beautiful glaciers are being reduced in size,” Wiens said. “Over the coming decades, the ice fronts will recede higher up the mountains and farther into the interior, potentially making them more difficult to visit. I can easily see that the glaciers have shrunk since I first visited this area in 1996.”

Ups and downs of field work in Patagonia

A group of Washington University students helped Wiens and his team service and collect data from the seismographs that were installed for this study as part of a 2019 Undergraduate Field Geology course field trip, led by Phil Skemer and Alex Bradley in the Department of Earth and Planetary Sciences. The students had the opportunity to spend their spring break getting firsthand experience with the geology of Patagonia — exploring tectonics, sediment accumulations and the geomorphological effects of alpine glaciation in the region.

Then the coronavirus pandemic hit, and international travel ground to a halt.

“The instruments were trapped in Chile and Argentina during COVID, so they were not returned in April 2020 as planned,” Wiens said. “Instead, they were returned in February 2021 through the tremendous help of our colleagues in those countries.

“But the seismographs operated well without any servicing over this time, so we collected about 10 months more data than initially planned,” he said.

Knowing more about what’s happening below the ground is important for monitoring future changes in places like the Patagonian icefields.

“One thing we can and will do now is incorporate the 3D mantle structure into a model for glacial isostatic adjustment in Patagonia, along with constraints on the extent of glaciation over time,” Mark said.

“Plate tectonics and the properties of the deep earth are vitally important for understanding how the land responds to glaciation [and deglaciation],” Wiens said. “With better earth models, we can do a better job of reconstructing recent changes in the ice sheets.”

Lithospheric erosion in the Patagonian slab window, and implications for glacial isostasy