Seeking the star stuff that made us

At the 2021 Fall Meeting of the APS Division of Nuclear Physics, two independent research groups will unveil new measurements aiming to explain the birth of half the universe’s elements. 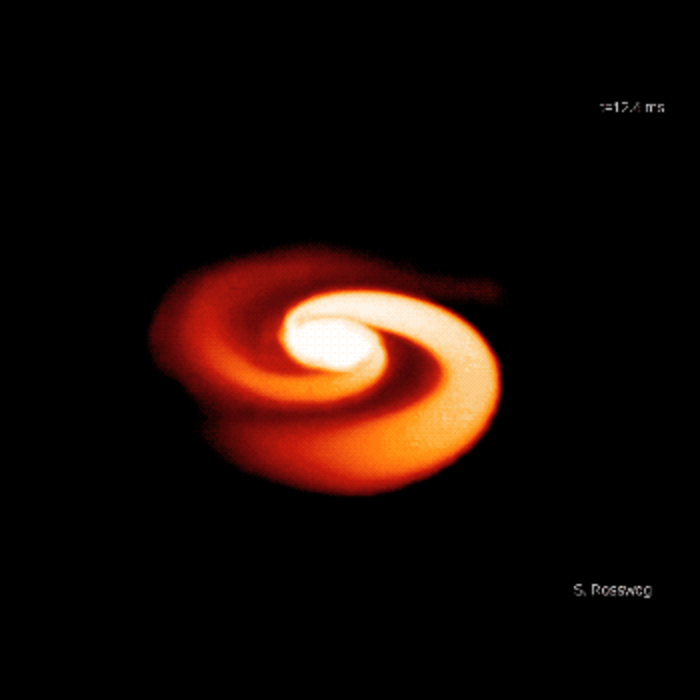 At the 2021 Fall Meeting of the APS Division of Nuclear Physics, two independent research groups will unveil new measurements aiming to explain the birth of half the universe’s elements.

The study of heavy element nucleosynthesis by the r process asks a simple yet bold question: Where does the material that makes up our solar system, our Earth, and ourselves actually come from?

The two groups have taken opposite approaches to finding an answer. One heads to the laboratory to hunt for “astromers,” while the other looks to the stars to compare heavy elements.

Astromers are astrophysically metastable isomers: excited states of atomic nuclei that last unusually long even in the hottest parts of space. They might react and decay differently than the corresponding ground state—which means they might have a special role to play in the processes that create the elements we find in our solar system.

“The influence of isomers has been studied only in a small number of cases, but our theoretical work is showing that their effects are likely broad-reaching and profound, with consequences on astrophysical observables and elemental compositions here at home on Earth,” said G. Wendell Misch, Postdoctoral Scholar at Los Alamos National Laboratory, who gives an overview of the latest astromer research at the meeting.

For instance, astromers could affect the r process that produces heavy elements. Misch collaborates with scientist Matthew Mumpower, also at Los Alamos, as well as scientist Kay Kolos from Lawrence Livermore National Laboratory and a team of researchers at Argonne National Laboratory, with the goal of measuring the yet unknown energies of these potentially influential astromers.

At the meeting, Kolos will present preliminary experimental findings that feed back into theoretical work by Misch.

“With our results, the theorists will be able to calculate the r-process nucleosynthesis to better precision. These measurements will help clarify what happens to astromer populations in the rapidly cooling environment after the r process ends,” said Kolos.

Meanwhile, another group undertakes an unusual, completely new direction for revealing the origin story of our heaviest elements: comparing their production to what is found in stars.

“The densest form of luminous matter in the universe exists in neutron stars: the final stopping point in the lives of certain stars much more massive than the sun,” said Erika Holmbeck, NASA Hubble Fellow at the Carnegie Observatories.

Holmbeck and collaborators looked at heavy elements by simulating their production in neutron stars and also observing those elements in other stars. From these joint r-process studies, they developed a new equation of state that describes neutron stars.

Their preliminary results, which Holmbeck will present at the meeting, agree with both theoretical predictions and measurements that probe neutron stars themselves by NASA’s NICER telescope.

“Although this approach is drastically different from other methods, we surprisingly find agreement with both NICER measurements and theory calculations about the structure of these exotic stars. The results also simultaneously explain the origin of the heaviest elements found in our solar system,” said Holmbeck.

Astromers in the Radioactive Decay of r-process Nuclei