In a blood sample taken from a cancer patient, there may be a single circulating tumor cell among hundreds of thousands of other cells. These tumor cells can provide valuable information about how cancer progresses, and could help doctors decide how to treat individual patients, but they are extremely difficult to find. 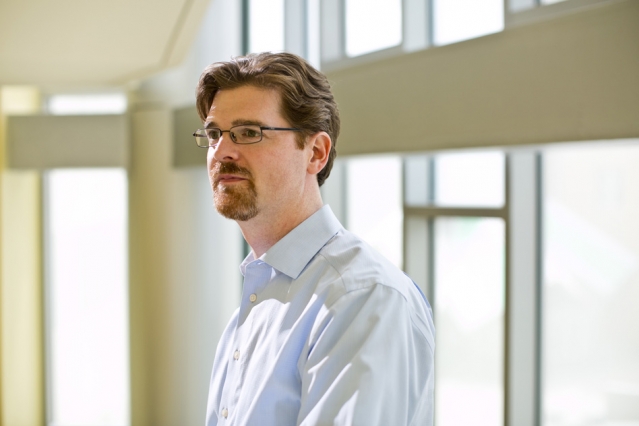 J. Christopher Love, an associate professor of chemical engineering at MIT and member of MIT’s Koch Institute for Integrative Cancer Research, has taken on this challenge by designing microscale devices that can isolate and analyze these incredibly rare cells. With such devices, he is trying to answer fundamental biological questions about not only circulating tumor cells, but also other rare cells, such as subsets of immune cells that respond to infection in different ways.

“Microtechnologies are really well suited to not only identify such rare cells, but also to analyze how that cell fits in with the entire population we are looking at,” Love says. “Both of those contexts are important for understanding the biology.”

“The interface of nanotechnology and biology”

Love knew that he wanted to be a scientist from a very young age. Growing up in Dallas, he started participating in science fairs in second grade, and also joined a program for aspiring astronauts. Beginning in elementary school, he got involved with a national competition, then called Odyssey of the Mind, in which students design and build robotic vehicles to perform certain tasks.

He kept up with that program after his family moved to Virginia, where he attended the Thomas Jefferson High School for Science and Technology, a magnet school in Alexandria. During his senior year, he also spent afternoons working at the MITRE Corporation with scientists who were researching some of the earliest approaches to nanoelectronic devices.

“This was back in 1994-95, so the idea of nanotechnology was really just coming to the forefront,” Love says. “It was still very new at that point.”

His experience working at MITRE showed him what it would be like to have a career in research, and also helped guide him in his choice of undergraduate majors — chemistry.

“By working on problems in nanotechnology, I recognized that chemistry was a focal point for many of the field’s central questions. Whether it’s the materials that make up solid-state electronics or you’re thinking about molecular electronics, chemistry seemed right at the core,” he says.

As an undergraduate at the University of Virginia, Love synthesized polymers with defined architectures that would yield interesting material properties. Having decided that he wanted to pursue a career in academia, he opted to go to graduate school at Harvard University, where he studied physical chemistry with George Whitesides, who was then pioneering the assembly of nanoscale structures for electronics and other applications.

“At that time, in the early 2000s, there was a lot of work being done at the interface of nanotechnology and biology, and trying to understand how could you use these little structures to interact with biological systems, whether as a direct way to impart a force or other stimuli to the cells, or maybe have electrical contacts with the cells,” Love says.

He felt that to really get into this field of research, he would need to learn more biology, so after finishing his PhD he was awarded a postdoctoral fellowship to study at Harvard Medical School with Hidde Ploegh, now a member of the Whitehead Institute. In Ploegh’s lab, Love worked on designing microfluidic channels to deliver stimuli to cells, and then imaging the cells to see how they responded.

One afternoon, while talking about why it was so hard to provoke immune cells to produce certain types of antibodies, Love and Ploegh sketched out a design for a new type of microscale system that could be used to isolate many individual cells and simultaneously measure the antibodies and other proteins that each cell secreted.

The device they came up with resembles a tiny ice cube tray, with individual compartments for each cell. They also developed a process known as microengraving that uses these trays, which can hold tens of thousands of single cells at a time, to measure each cell’s secretions.

Since starting his own lab at MIT in 2007, Love has advanced this technology to study a range of questions related to human diseases, including cancer. Working closely with researchers at the Broad Institute, of which he is an associate member, Love has been able to efficiently isolate circulating tumor cells and then sequence their genomes, shedding light on how they differ from cancer cells at the original tumor site.

Sequencing metastatic cancer-cell genomes could also offer the potential to monitor how patients’ tumors respond to chemotherapy drugs, and customize plans for treatment. Love and his colleagues are also using this approach to try to predict how individual patients’ cells will respond to new types of immunotherapy drugs, which recruit the body’s own immune system to attack tumors.

“These therapies are still expensive, and it’s difficult to know whether or not patients are going to respond before they start the therapy. We’re trying to find out if we can help identify patients that would be more likely to respond to these,” he says.

Love also uses this microtechnology to study how cells respond to HIV infection. In particular, his lab is analyzing the responses of mucosal immune cells, such as those lining the female genital tract, which appear to be different from those of blood cells. This knowledge could help scientists to better design vaccines that induce protective responses in mucosal tissues, potentially offering better immunity to infection, Love says.

“For women who have been infected with HIV, there is still a lot we don’t understand about how the immune system responds to the infection at the local mucosal surfaces,” Love says. “That’s work that’s still ongoing but it is clear that these cells have traits unique from those in blood, and these are worth trying to characterize further.”