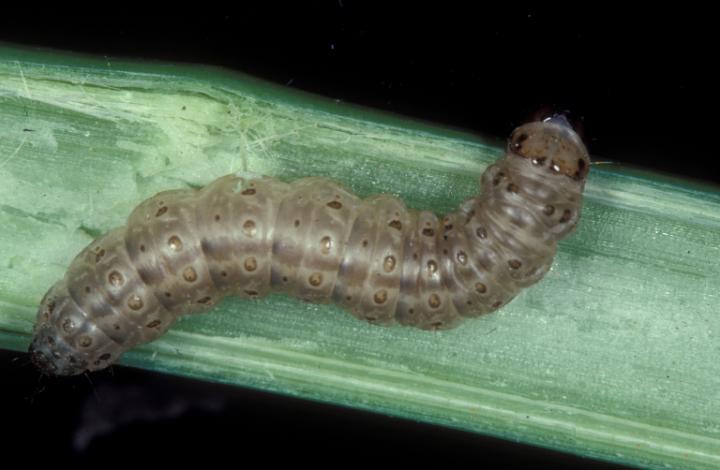 MEDFORD/SOMERVILLE, Mass. (October 10, 2019)–A team of biologists led by Tufts University has found two genes that may permit some insect species to survive climate change by adjusting their biological annual clocks while others succumb. The ability to synchronize behavioral, morphological and other transitions with the seasons is integral to the life cycle of most insects. In the study published today in Current Biology, the researchers looked at the European corn borer moth (Ostrinia nubilalis) and pinpointed variation in two circadian clock genes – per and Pdfr – that enable different populations of the moth to adapt their transitions to longer or shorter winters.

The length of winter is expected to decrease by a month over the next century, and as climate change is already underway, many insect species are experiencing profound effects. In some cases, climate change has contributed to the extended range of insect pests, like the Ostrinia moth and lanternflies, and in other cases, beneficial pollinators have declined. The authors of the study noted that despite the importance of circannual rhythms to the ability of insects to adapt to rapidly changing environments, little is known about the underlying mechanisms of this phenomenon.

Earlier springtime activity and emergence from a dormant winter state (diapause) can allow insect populations to seek out and find favourable environments and to produce more generations per year, both of which improve the survivability of the insects in the face of rapid environmental change. By conducting a broad scan of the corn borer genome among five moth populations with varying diapause, the authors found that the two genes correlating with this activity are the genes period (per) and pigment dispersing factor receptor (Pdfr). The authors further predict that intense selection on variants of these two genes is likely to be important to adaptation and range expansion under continued global climate change.

“We can now start to look at these genes in other insects, to see how variation might be linked to changes in timing for when they go dormant before winter, and when they ‘wake up’ in the spring,” said Genevieve Kozak, first author of the study, which was the subject of her postdoctoral work in Tufts University’s Department of Biology. “By knowing a little bit about the proteins these genes code for, we can start connecting molecular mechanisms to insect behaviour and physiological response to climate.”

Both per and Pdfr are known to interact with circadian pacemaker neurons in insect brains, where their role is to synchronize biological activity to the daily cycles of night and day (research on per led to the Nobel Prize in 2017). It is interesting to note that these two genes and their products, known to coordinate short term biological cycles, have been discovered in this study to also be important for long term, annual cycles. The authors suggest a linkage between the daily clock and the seasonal timer.

“Although we still have a long way to go, the completion of the molecular picture can help biologists not just understand but possibly predict and anticipate the impact of climate change on different insect species,” said Erik Dopman, professor of biology at Tufts University School of Arts and Sciences and Kozak’s advisor. “We can use that information to help guide conservation and pest management efforts.”

Tufts University, located on campuses in Boston, Medford/Somerville and Grafton, Massachusetts, and in Talloires, France, is recognized among the premier research universities in the United States. Tufts enjoys a global reputation for academic excellence and for the preparation of students as leaders in a wide range of professions. A growing number of innovative teaching and research initiatives span all Tufts campuses, and collaboration among the faculty and students in the undergraduate, graduate and professional programs across the university’s schools is widely encouraged.

New study finds that race is a factor in investment judgments