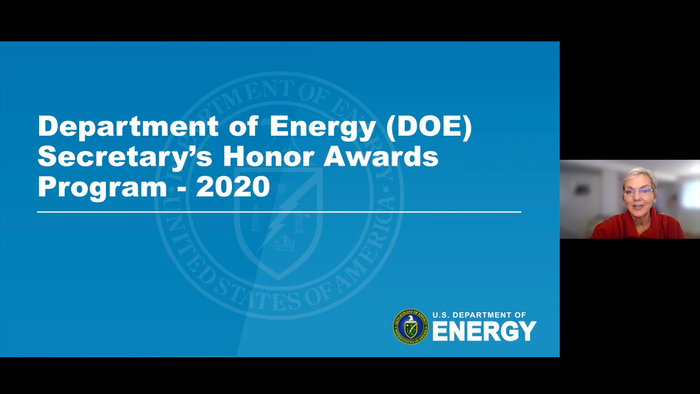 The annual awards recognized 21 teams and three individuals for service and contributions to DOE’s mission and to the benefit of the nation. More than 50 current employees and recent retirees from ORNL received awards.

“The Department of Energy’s core mission — promoting scientific discovery, maintaining the nuclear deterrent and remediating environmental harms — have never been more important,” Granholm said. “Our role in tackling the climate emergency and ensuring America’s continued security and prosperity is absolutely critical, and it could not be done without the dedicated and diverse team of world-class scientists, engineers, policy experts and mission support personnel employed at our headquarters, fields sites and laboratories across the country.”

The teams and ORNL employees named in achievement awards include:

Advanced Computer Tools to Identify Classified Information Program Team. This team creates tools to improve the classification decision-making process. The award citation states, “The ACTICI team, composed of a diverse collection of subject matter experts from across the DOE complex, is solving this most difficult problem through collaboration and teamwork allowing great ideas to be shared among the labs and across the government.” ORNL employees named in the award include Dustin Reinert, Chelsey Dunivan Stahl, Christopher Stahl and Steven Young.

Alloy 617 American Society of Mechanical Engineers Code Qualification Team. The team facilitated the addition of a new alloy to the American Society of Mechanical Engineers Boiler and Pressure Vessel Code, the first alloy to be added in 20 years. The nickel, chromium, cobalt and molybdenum alloy enables “the use of high-temperature reactors to meet the United States’ energy security and climate change goals and paves the way for additional advanced alloys to be qualified in the future,” according to the citation. ORNL employee Yanli Wang was named in the award.