Second order optical merons, or light pretending to be a ferromagnet 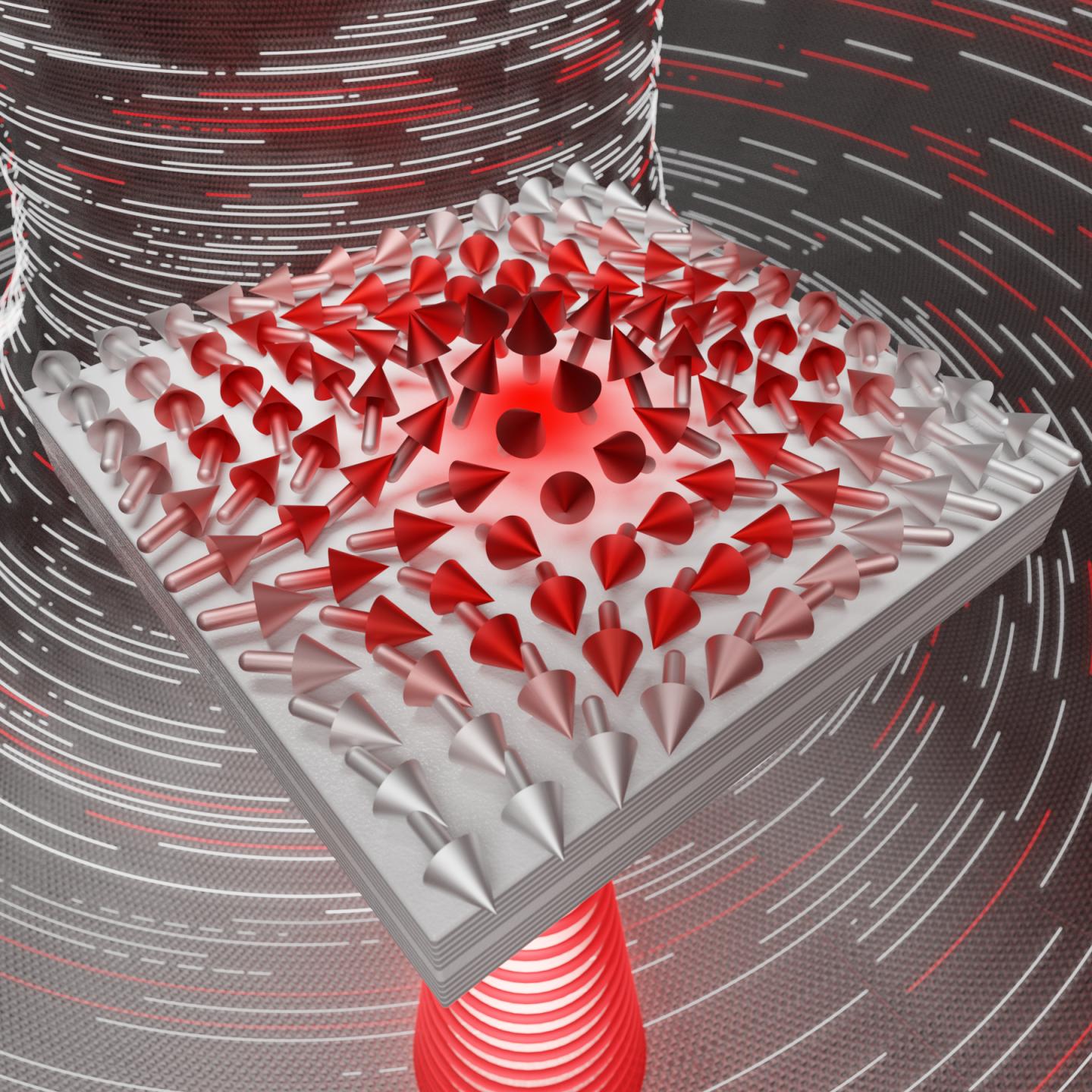 The scientists have demonstrated how to structure light such that its polarization behaves like a collective of spins in a ferromagnet forming half-skyrmion (also known as merons). To achieve this the light was trapped in a thin liquid crystal layer between two nearly perfect mirrors. Skyrmions in general are found, e.g., as elementary excitations of magnetization in a two-dimensional ferromagnet but do not naturally appear in electromagnetic (light) fields.

One of the key concepts in physics, and science overall is the notion of a “field” which can describe the spatial distribution of a physical quantity. For instance, a weather map shows the distributions of temperature and pressure (these are known as scalar fields), as well as the wind speed and direction (known as a vector field). Almost everyone wears a vector field on their head – every hair has an origin and an end, just like a vector. Over 100 years ago L.E.J. Brouwer proved the hairy ball theorem which states that you can’t comb a hairy ball flat without creating whorls, whirls (vortices) or cowlicks.

In magnetism, the elementary excitations in a two-dimensional magnetization vector field have the form of such vortices and are called skyrmions. Going clockwise around the center of such a vortex, we can observe, that the vectors attached to subsequent points on our path can rotate once or many times, clockwise or anticlockwise (Fig. 2). The quantity that describes this feature is called the vorticity. Skyrmions and half-skyrmions (merons) of various vorticities can be found in such different physical systems as nuclear matter, Bose-Einstein condensates or thin magnetic layers. They are also used in the description of the quantum Hall effect, cyclones, anticyclones and tornadoes. Especially interesting are experimental setups, in which one can create various vector fields on demand and investigate the interactions of their excitations.

Scientists from University of Warsaw, Military University of Technology, University of Southampton, Skolkovo Institute in Moscow, and Institute of Physics PAS have demonstrated how to structure light such that its polarization behaves like a half-skyrmion (meron). To achieve this the light has been trapped in a thin liquid crystal layer between two nearly perfect mirrors, known as an optical cavity. By controlling the polarization of incident light and the orientation of the liquid crystal molecules they were able to observe first-order and second-order (first experimental observation) merons and anti-merons (vorticities -2, -1, 1, and 2).

A relatively simple optical cavity filled with a liquid crystal enables the scientists to create and investigate exotic states of polarization of light. The device can potentially allow to test the behavior of these excitations (annihilation, attraction or repulsion of skyrmions and merons) on an optical table when combined with more exotic optically responsive materials. Recognizing the nature of the interaction between these objects can help understand the physics of more complex systems, requiring more sophisticated experimental methods (e.g. ultra-low temperatures).

Physics and Astronomy first appeared at the University of Warsaw in 1816, under the then Faculty of Philosophy. In 1825 the Astronomical Observatory was established. Currently, the Faculty of Physics’ Institutes include Experimental Physics, Theoretical Physics, Geophysics, Department of Mathematical Methods and an Astronomical Observatory. Research covers almost all areas of modern physics, on scales from the quantum to the cosmological. The Faculty’s research and teaching staff includes ca. 200 university teachers, of which 87 are employees with the title of professor. The Faculty of Physics, University of Warsaw, is attended by ca. 1000 students and more than 170 doctoral students.

Faculty of Physics, University of Warsaw

Webpage of the Polariton Laboratory

Press office of the Faculty of Physics, University of Warsaw.

https://www.fuw.edu.pl/tl_files/press/images/2021/FUW210222b_fot01.png
Spin texture of a second-order half-skyrmion (meron) on the surface of a birefringent cavity. (Source: Physics UW, M. Krol)