Searching for breakthroughs on multiple fronts 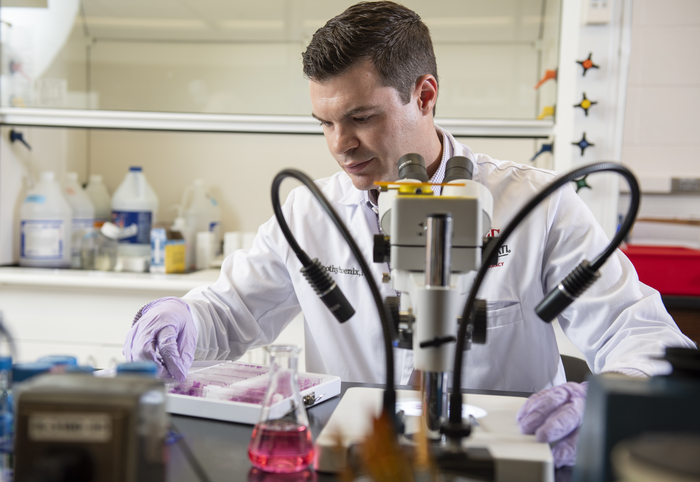 With the aid of federal and nonprofit grants, the University of Cincinnati’s Timothy Phoenix, PhD, is currently leading three different research projects into the genetic workings of deadly pediatric brain tumors.

Phoenix’s work focuses on diffuse midline gliomas, formerly referred to as Diffuse Intrinsic Pontine Gliomas (DIPG), which are tumors of the primary central nervous system meaning they begin in the brain or spinal cord. Each year, approximately 200-300 children in the United States are diagnosed with this tumor that is commonly located in the brain stem.

The tumors cannot be surgically removed due to their location in an area of the brain that controls breathing and essential functions. Phoenix said the cancer is currently treated with radiation, but it is not an effective treatment, leading to a nearly zero percent survival rate.

“Most patients die within a year or two after being diagnosed,” Phoenix said. “So it’s truly a devastating disease.”

Phoenix, assistant professor in UC’s James L. Winkle College of Pharmacy Division of Pharmaceutical Sciences and a UC Cancer Center member, received a five-year, $2 million grant from the National Institutes of Health that will focus on how certain genes activated in brain tumors affect nearby blood vessels.

Blood vessels in the brain have a special property known as the blood-brain barrier that blocks potentially harmful things from entering the brain, Phoenix said. While this is normally a good thing, the barrier can also prevent drugs from reaching brain tumors, and the barrier does a particularly good job at protecting DIPGs from treatment.

“So what we’re interested in understanding is: How do tumors regulate this gene, and then really understanding what it is doing to the blood vessels in these tumors,” Phoenix said. “If we get rid of the gene in our tumor models, does that cause a change in the blood-brain barrier within the tumor or does it change how the tumor grows?”

There are some drugs that target that gene in clinical settings, but Phoenix said they have not had any clear findings yet. Understanding in more detail how the gene and the blood vessels interact should help develop more effective treatments to disarm the blood-brain barrier and allow more treatments to reach tumors.

This study will also research why that particular gene is active in some tumors but not in others.

“When you do clinical trials, you don’t see these [gene] differences, so you would just give these drugs to any patient and you could be trying to stop something that isn’t there,” Phoenix said. “So we want to understand how these therapies could function and if some of their function is dependent on whether the gene is being expressed or not.”

In a separate study, Phoenix and a close collaborator, Pratiti Bandopadhayay of the Dana-Farber Cancer Institute, have been awarded a three-year, $600,000 grant from the ChadTough Defeat DIPG Foundation, a nonprofit based in Michigan founded by two families who lost their sons to diffuse midline gliomas.

Phoenix and Bandopadhayay will research how a different gene, known as MYC, contributes to the growth of these pediatric brain tumors.

“MYC is a gene that’s well studied in the context of adult cancers but was sort of underappreciated in these pediatric gliomas,” Phoenix said.

The researchers will study exactly how the gene gets activated through different methods and what it does to help tumors grow. This includes researching how MYC potentially cooperates with a gene mutation known to play a part in causing the cancer to grow in the first place.

“We know that this mutation is an essential part of causing the cancer, but just that mutation itself isn’t sufficient to cause it,” Phoenix said. “It needs to cooperate with other things.”

Learning how the MYC gene is activated and works to the tumors’ advantage should help researchers leverage and develop new drugs that can counteract the work of the gene.

Phoenix and Bandopadhayay are also collaborating on a $500,000 research grant from Prayers From Maria Foundation, an Ohio-based nonprofit that supports pediatric glioma research.

This study will use new tumor models to test the effectiveness of a drug that targets a vulnerability in the tumors due to a specific genetic mutation. The drug is hoped to effectively reverse the effect the mutation has on tumor growth.

Phoenix said the study’s overall goal is to translate the drug into precision medicine clinical trials for the 10%-20% of children diagnosed with the tumors where the mutation is present. There is also the potential for the drug to be used to treat other brain tumors and cancers including leukemia and endometrial carcinoma where the same mutation is present.

The researchers cite no conflicts of interest.