The deep ocean is a dark place, yet deep-diving seals can easily locate their prey in that darkness. A multi-national research team has used field-based studies to better understand how seals use their whiskers in their search for prey. 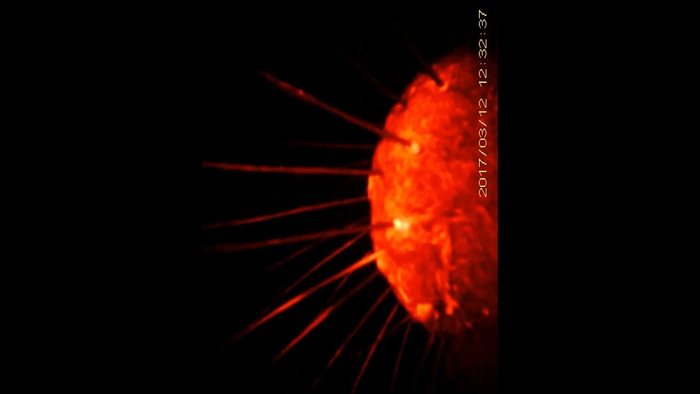 The deep ocean is a dark place, yet deep-diving seals can easily locate their prey in that darkness. A multi-national research team has used field-based studies to better understand how seals use their whiskers in their search for prey.

The team published their findings in the Proceedings of the National Academy of Science.

In deep ocean waters where no sunlight reaches, bioluminescence, the light that some creatures carry in their bodies, provides light. But this light from bioluminescence is very limited. Toothed whales are able to hunt in these dark waters, using active biosonar, or echolocation, to find their prey. Deep-diving seals hunt in these waters too. Yet they lack the active sonar the whales have to help them hunt.

The team hypothesized that the seals rely on their highly-developed whiskers to locate prey.

Unlike humans, most mammals have vibrissae, or mobile facial whiskers. The word “vibrissae” comes from the Latin word “vibrio” which means “to vibrate.” Used to describe the seals’ whiskers, it stresses the reception of vibration information. Until now, researchers have not understood the natural movement and function of mammals’ facial whiskers because of the challenges in observing the whisker movement in a mammals’ natural environment.

Previous studies had been conducted in experimental settings with isolated whiskers, artificial models, or captive animals. The team wanted to learn how the seals used their whiskers in their natural deep ocean environment. The researchers placed small video loggers on free-ranging female northern elephant seals, choosing elephant seals because of their highly sensitive whiskers. These seals have the highest number of nerve fibers per whisker of any mammal. The researchers mounted the video loggers on each seal’s cheek to observe how the seal moves and uses the whiskers in front of its mouth.

With the video loggers, the researchers observed the elephants seal foraging in the extreme environment of the deep, dark ocean. The video logger was equipped with an LED red/infrared-light flash. This light was not visible to the seal, but it allowed the researchers to non-invasively observe how the seals use their whisker as they approach their prey. The cameras showed that the seals captured moving prey by sensing the water movement. With their whiskers extended forward ahead of their mouth, the seals performed rhythmic whisker movement—protracting and retracting their whiskers—to search for hydrodynamic cues, similar to the ways a terrestrial mammal explores its environment.

The team took into consideration the possibility that light provided by the bioluminescence in some prey might help the seals in their hunt for food. But their findings reveal that while bioluminescence is important, the seals’ sensitive whiskers are the primary method the mammal uses to find its prey.

The seals’ whiskers allow them to search for, pursue, and capture prey. “Our findings solve a decades-long mystery about how deep-diving seals locate their prey without the biosonar used by whales, revealing another mammalian adaptation to complete darkness,” said Taiki Adachi, Project Researcher at the National Institute of Polar Research / Assistant Project Scientist of University of California Santa Cruz. This research complements earlier whisker studies conducted on mammals in captive conditions, and it propels forward the field of sensory ecology of foraging. “The next step is conducting comparative field studies on other mammals to better understand how whisker-sensing shapes natural behavior in each mammalian species under different environments,” said Adachi.

* Patrick W. Robinson from the Department of Ecology and Evolutionary Biology, University of California Santa Cruz.

* Luis A. Hückstädt from the Institute of Marine Sciences, University of California Santa Cruz; Centre for Ecology and Conservation, University of Exeter.

The research was funded by grants from Grant-in-Aid for Scientific Research from the Japan Society for the Promotion of Science, the Office of Naval Research, and the E&P Sound and Marine Life Joint Industry Project of the International Association of Oil and Gas Producers.

The NIPR engages in comprehensive research via observation stations in Arctic and Antarctica. As a member of the Research Organization of Information and Systems (ROIS), the NIPR provides researchers throughout Japan with infrastructure support for Arctic and Antarctic observations, plans and implements Japan’s Antarctic observation projects, and conducts Arctic researches of various scientific fields such as the atmosphere, ice sheets, the ecosystem, the upper atmosphere, the aurora and the Earth’s magnetic field. In addition to the research projects, the NIPR also organizes the Japanese Antarctic Research Expedition and manages samples and data obtained during such expeditions and projects. As a core institution in researches of the polar regions, the NIPR also offers graduate students with a global perspective on originality through its doctoral program. For more information about the NIPR, please visit: https://www.nipr.ac.jp/english/