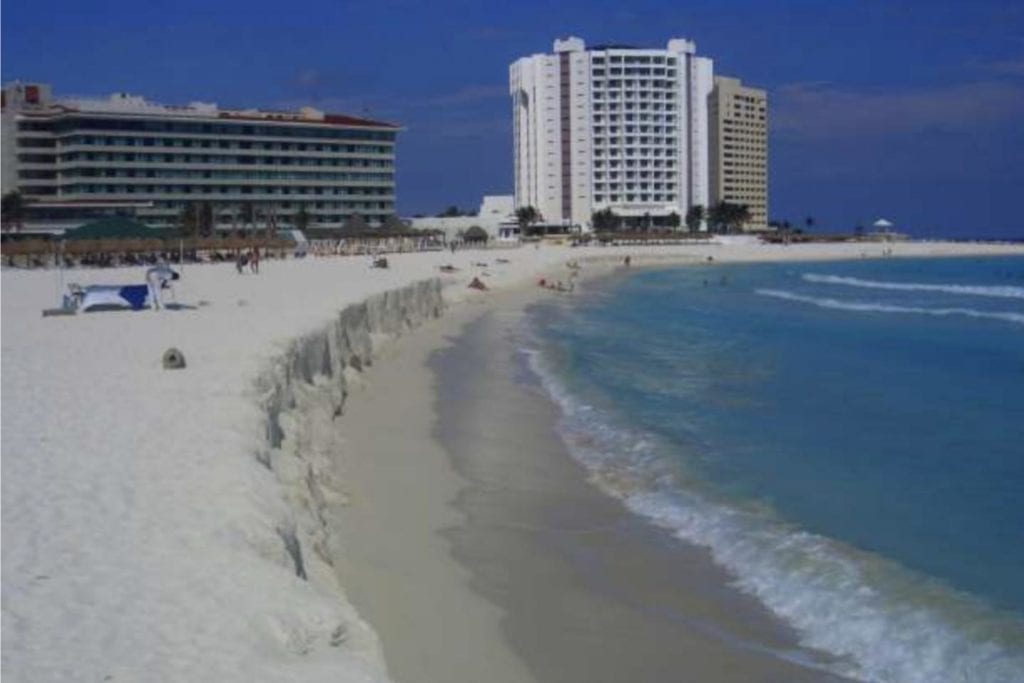 Seagrass beds are so effective in protecting tropical beaches from erosion, that they can reduce the need for regular, expensive beach nourishments that are used now. In a recent article in the journal BioScience, biologists and engineers from The Netherlands and Mexico describe experiments and field observations around the Caribbean Sea. “A foreshore with both healthy seagrass beds as well as calcifying algae, is a resilient and sustainable option in coastal defense”, says lead author Rebecca James, PhD-candidate at the University of Groningen and the Royal Dutch Institute for Sea Research (NIOZ), The Netherlands. “Because of erosion, the economic value of Caribbean beaches literally drains into the sea.”

The authors looked at beaches of the Caribbean Sea, where almost a quarter of the Gross Domestic Product is earned in tourism, mainly around the beaches. “With the increase of coastal development, the natural flow of water and sand is disrupted, natural ecosystems are damaged, and many tropical beaches have already disappeared into the sea”, co-author Rodolfo Silva, professor of Coastal Engineering at the Universidad Nacional Autónoma of Mexico says. “Until now, expensive coastal engineering efforts, such as repeated beach nourishments and concrete walls to protect the coast, have been made to combat erosion. Rising sea-level and increasing storms will only increase the loss of these important beaches.”

To find out to what extent seagrass beds are able to hold sand and sediment on the beach foreshores, James and her promotor, professor Tjeerd Bouma (NIOZ and Utrecht University), conducted a simple but telling experiment. With a portable and adjustable field flume to regulate water motion in a Caribbean bay, they observed when particles on the sea bed started moving. “We showed that seagrass beds were extremely effective at holding sediment in place”, James says. “Especially in combination with calcifying algae that “create their own sand”, a foreshore with healthy seagrass appeared a sustainable way of combating erosion.”

Along the coastline of the Mexican peninsula of Yucatan, the team put their theory to the test. “By looking at beaches with and without protection of healthy seagrass beds, we showed that the amount of erosion was strongly linked to the amount of vegetation: more seagrass, meant less erosion”, co-author dr. Brigitta van Tussenbroek of the Universidad Nacional Autónoma in Mexico says. “At beaches where seagrass beds were destroyed, the researchers saw a sudden strong increase in erosion, resulting in an immediate need of expensive beach nourishments.

Both NGO’s and engineering industry welcome these novel insights. “To date, seagrass beds are too often regarded as a nuisance, rather than a valuable asset for preserving touristically valuable coastlines. This study could change this perspective completely”, Bas Roels of World Wildlife Fund Netherlands says. “The study opens opportunities for developing new tropical-beach protection schemes, in which ecology is integrated in engineering solutions”, adds Mark van Koningsveld, professor at the Delft University of Technology and working for the international marine contractor Van Oord.

According to co-author Johan Stapel of the Caribbean Netherlands Science Institute (CSNI) on St. Eustatius this will require a multilateral approach in conservation and restoration, as seagrass faces increasing pressure from various sources of pollution and invasive species. “Fortunately, NIOZ has a strong tradition in successfully restoring all kinds of coastal vegetation from seagrass to mangroves”, Bouma concludes.

'A way cool way to be': Study offers new insights into children with autism

Are testosterone-boosting supplements effective? Not likely, according to new…

Scienmag Jun 26, 2019
Over-the-counter 'T boosters' are a popular choice for men looking to raise testosterone levels, and are frequently…

Why do birds migrate at night?