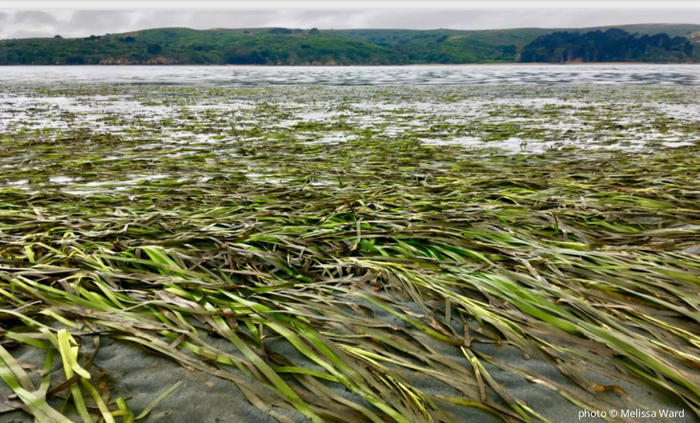 In a new study published October 6 in Ecological Applications, researchers demonstrated that eelgrass restoration efforts can lead to rapid expansion of restored plots and recovery of ecosystem functions.

The study involved small-scale experimental seagrass restoration efforts in Elkhorn Slough on the Central Coast of California. Researchers transplanted 2,340 shoots of eelgrass from healthy meadows into 117 small plots, and evaluated their success relative to areas without vegetation and natural eelgrass meadows.

“Within a few years, most of the ecosystem functions were near or at the level seen in natural eelgrass meadows, suggesting that these habitats can recover pretty quickly if the conditions are right,” said first author Kathryn Beheshti, who earned her Ph.D. in ecology and evolutionary biology at UC Santa Cruz in 2021 and is currently a California Sea Grant Fellow at the Ocean Protection Council’s Climate Change Program.

The restored plots expanded dramatically, resulting in eelgrass beds covering an area 85 times larger than the initial plots. The restored beds began to resemble the natural meadows in structural features such as canopy height and shoot density, in the richness and abundance of species using the restored habitat, and in water quality. The study assessed a suite of seven ecosystem functions, and the researchers also developed a multifunctionality index to assess the overall functional performance of the restored beds.

“We found that overall the restored plots are performing higher than unvegetated plots and just slightly below the natural meadows,” Beheshti said.

The benefits of eelgrass meadows range from coastal protection and sediment stabilization to providing food and shelter for many species of fish and invertebrates. Eelgrass meadows provide crucial nursery habitat for many commercially important species, such as Dungeness crab, California halibut, and Pacific herring, whose juveniles find protection within the dense canopy. By slowing water flow and attenuating waves, eelgrass can act as a storm buffer and can protect developed coastlines from storm surges. Eelgrass meadows also counteract ocean acidification by absorbing carbon dioxide from seawater.

“Seagrass provides a whole suite of ecosystem services that we rely on, including all the recreational uses by folks like birders, kayakers, fishers, and others,” Beheshti said.

She noted that the California Ocean Protection Council’s Strategic Plan to Protect California’s Coast and Ocean includes a target to preserve the existing, known 15,000 acres of seagrass beds and create an additional 1,000 acres by 2025. In addition, she said, NOAA’s National Marine Fisheries Service is updating its California Eelgrass Mitigation Policy, which currently calls for “no net loss of eelgrass habitat function” but does not require mitigation projects to assess habitat function.

“This study will be a valuable resource for these ongoing efforts,” Beheshti said.

In June, Beheshti and Melissa Ward, an environmental scientist at San Diego State University, published a report on eelgrass restoration for the Pacific Marine and Estuarine Fish Habitat Partnership (“Eelgrass Restoration on the U.S. West Coast: A Comprehensive Assessment of Restoration Techniques and Their Outcomes”).

In addition, Beheshti, Ward, and Brent Hughes at Sonoma State University, a coauthor of the new paper, are working on a tutorial video about seagrass restoration techniques funded by the Anthropocene Institute. Beheshti said their assessments of past restoration efforts have identified site conditions as the primary driver of success.

“If the site has poor water quality or is prone to erosion or sediment deposition, those are the main predictors of success or failure,” she said. “At Elkhorn Slough, the natural eelgrass meadows were also expanding at the same time as our restoration project, so the conditions were primed for success. At this point we can only speculate, but we’d like to explore in a more quantitative way why the restoration was so successful.”

In addition to Beheshti and Hughes, the coauthors of the paper include Susan Williams at UC Davis, Katharyn Boyer at San Francisco State University, Charlie Endris at Moss Landing Marine Laboratories, Annakate Clemons at UC Santa Cruz, Tracy Grimes at San Diego State University, and Kerstin Wasson at UCSC and the Elkhorn Slough National Estuarine Research Reserve. This work was supported in part by grants from the Ocean Foundation and the Anthropocene Institute.