Sea urchins, albeit having a limited and ancestral sensory system, can show a complex behaviour when escaping a predator. These marine invertebrates tend to move slowly and with unpredictable movements, but when they smell a predator, they escape following a ballistic motion ─straightforward, quick and directional─ to escape the threat. 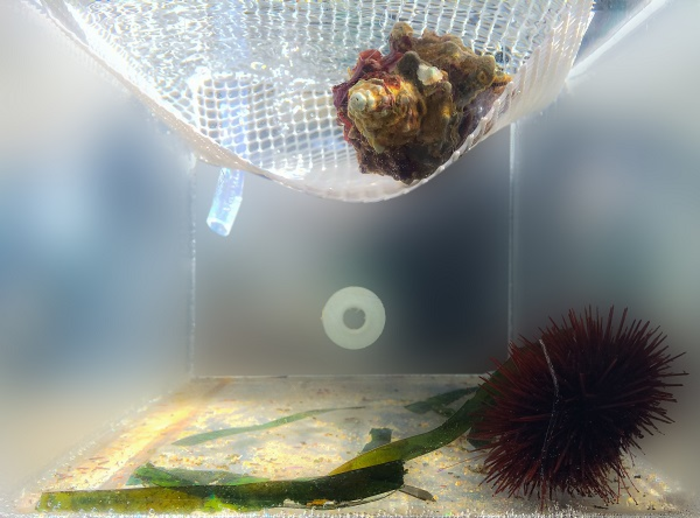 Sea urchins, albeit having a limited and ancestral sensory system, can show a complex behaviour when escaping a predator. These marine invertebrates tend to move slowly and with unpredictable movements, but when they smell a predator, they escape following a ballistic motion ─straightforward, quick and directional─ to escape the threat.

This is stated in an article now published in the journal BMC Movement Ecology. The first author of the study is the expert Jordi Pagès, from the Faculty of Biology and member of the Biodiversity Research Institute (IRBio) of the University of Barcelona, and also the CEAB-CSIC. Other co-authors of the article are the experts Javier Romero (UB-IRBio), Frederic Bartumeis (CEAB-CSIC and CREAF) and Teresa Alcoverro (CEAB-CSIC).

The Paracentrotus lividus or sea urchin is a herbivorous animal with long and robust spines that lives in the rocky seabeds and marine phanerogamic meadows of the Mediterranean Sea and the Atlantic Ocean. It belongs to the echinoderms ─a species from echinoderms without arms and slow movements─ and it moves thanks to its ambulacral system, of radial symmetry and five rows of small feet with ventouses.

In the study, the team compared in the laboratory the movement patterns of the P. lividus depending on whether they are exposed or not to the smell of one of their main predators: the sea snail Hexaplex trunculus. Unlike other studies, focused on the immediate response to the stimulus, this one analyses the movement pattern of the urchins during minutes, even hours, after receiving the stimuli.

“To date, we knew that urchins could react to different chemical and light stimuli, in the marine environment. For instance, when they perceive the smell of a predator or an wounded urchin, they reduce the activity and do not move from their shelter (holes or cracks in the rocks)”, notes Jordi Pagès, member of the Department of Evolutionary Biology, Ecology and Environmental Sciences of the University of Barcelona. “However, ─he continues─, we did not know how fast the reaction to the chemical stimuli was, nor how it translated into changes in the movement trajectory when there is no shelter”.

The study reveals that, when there are no stimuli ─without the smell of the predator─, sea urchins move diversely: from random and variable trajectories without direction ─Brownian motion─, to superdiffusive movements, which involve more complexity both in the trajectory and the behaviour of the animal.

“It’s suprising that such ancestral and simple invertebrates ─without visual organs or a central nervous system─ show such diverse and complex movement patterns. The ability to move with this variety of trajectories, in the absence of the smell of a predator, will facilitate, in evolutionary terms, its survival”, notes Pagès. “In fact, there are fossil traces of echinoids in marine sediments that suggest that these urchins’ complex movements took place more than 50 million years ago. Therefore, it is believed that this ancient and well-preserved behaviour must have been an effective strategy to find resources (food, shelter, etc.) distributed in a sparse and scarce way, as it usually happens in the marine environment”.

How do sea urchins react to the predator’s smell?

This situation changes when the urchins smell a predator. Then, the wide range of movement patterns disappears and there is an only response: ballistic motion ─straight, fast and directional─, typical from escaping. For instance, in the absence of the smell of the predator the average speed of urchins was close to 8cm/minute, while those urchins exposed to the chemical stimulus of the predator reached the 15 cm/minute (with an average of 11cm/minute).

The quick and straightforward escape is a common pattern in preys that escape from a predator which moves at a similar pace. If the speed of the predator and the prey is different ─or if the hunting strategy of the predator consists in intercepting or surprising the prey─ this escape would not work.

“In short, sea urchins can perceive the chemistry of their predators and react instantly by changing their movement patterns. That is, they fear the predators and react accordingly. This response, coherent and consistent in all individuals, has an adaptive sense”, says Pagès. “This makes us think that, just like there are optimal movement patterns for finding food, there are optimized movements for escaping the predators”.

Cascade effect due to fearing the predator

Although studying animal behaviour may seem like a simple curiosity, the paper in BMC Movement Ecology brings new perspectives to understand how this behaviour can influence ecological processes at a large scale. In ecology, cascading effects have often been described due to changes in prey behaviour generated by fear of predators. Pagès explains a case like this in the Medes Islands, stated in previous studies: “In protected areas such as the Medes Islands ─where the population of predators is larger, and therefore, the risk of being a prey is higher too─, sea urchins do not even try to leave the shelter, which makes the algae populations to be more abundant. On the other hand, a kilometer away, in the Montgrí coast, where predator populations are less abundant, the urchins do dare to go outside the shelter and can eat the algae populations, leaving areas of rock without algae (called barren grounds)”.

The classic models to understand interactions between predators and preys ─Lotka and Volterra equations─ assume that individuals from both populations move like molecules of an ideal gas, following a Brownian motion, until they meet by chance. This is when the predator eats the prey. Recently, several studies have reviewed these models to add the option that predators can move in a more realist way and therefore complex, “but they have not focused yet on the fact that preys can also modify movement patterns and adopt complex behaviour”, notes the researcher.

“Our study shows that if such a simple species like the sea urchin is able to react in such a clear way in front of a predator, it is worth to add this complexity to the predator-prey models. Only by doing so will we be able to predict the coexistence capacity of predator and prey populations and understand the populational dynamics in nature”, concludes Jordi Pagès.