Sea turtle: Sentinels and victims of plastic pollution in the Adriatic Sea 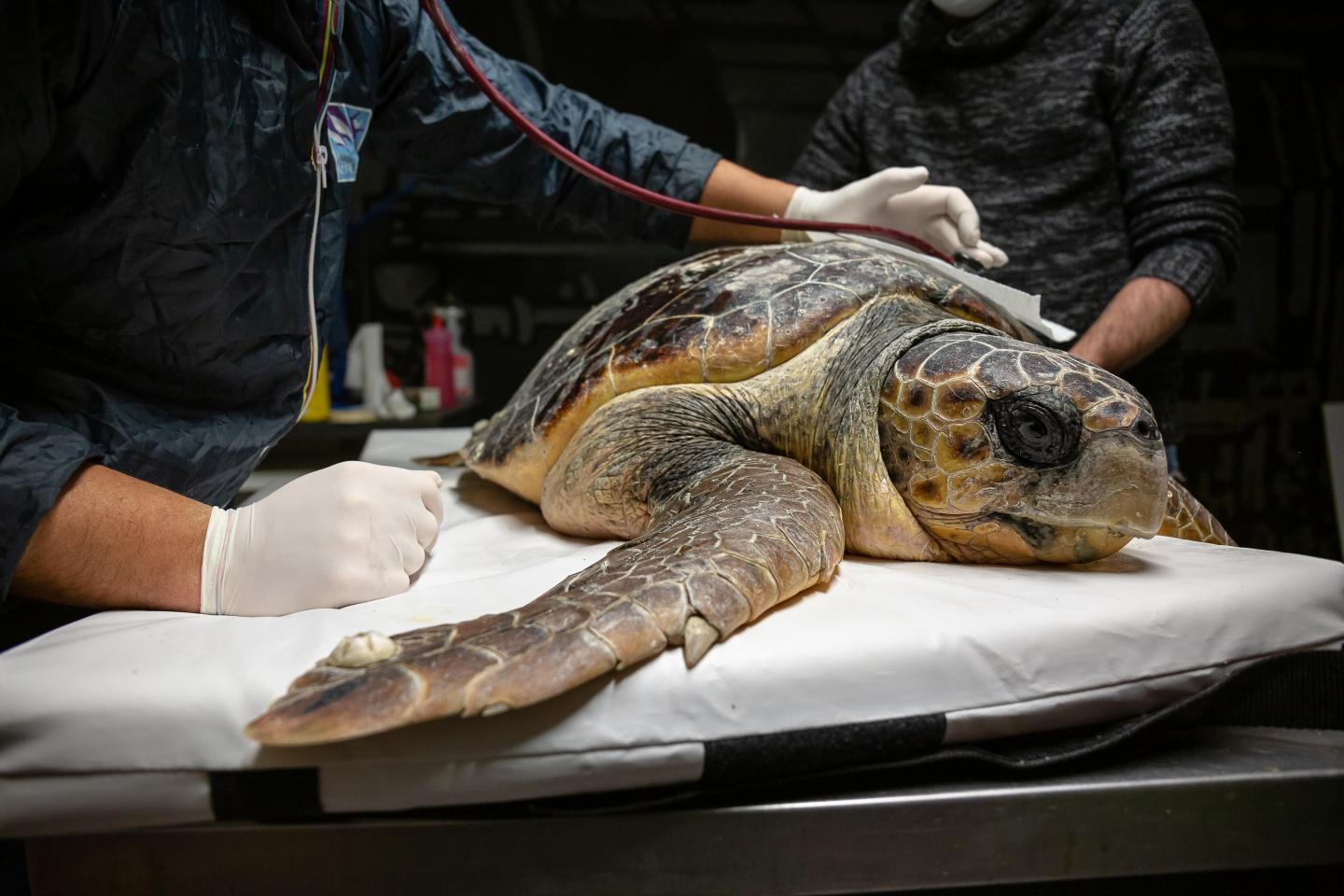 Sea turtles are witnesses and victims of the high level of plastic pollution of the Adriatic Sea. A group of researchers at the University of Bologna analysed 45 turtles hospitalised at Fondazione Cetacea in Riccione and found plastic debris in their faeces. Besides confirming the role of turtles as ideal sentinels to monitor plastic pollution in the sea, the results of their analysis – published in the journal Frontiers of Marine Medicine – crucially show how the plastic debris in their intestines can dangerously alter their microbiota, eventually compromising their health.

“The results of this study prove the pervasiveness of plastic pollution in the ecosystem of the Adriatic Sea, a marine environment intensively exploited by the industry”, explains Elena Biagi, the first author of the study who is also a researcher at the Department of Pharmacy and Biotechnology of the University of Bologna. “Plastic waste originates debris that enters the marine food webs and can be found in high concentrations across the food chain up to the top predators, such as marine turtles. This bears severe consequences on their health, some of which are also due to the variations caused in their gut microbiota”.

It has been estimated that more than 10 million tons of plastic enter the oceans every year, becoming responsible for more than 80% of marine litter. Between marine mammals, birds and sea turtles, around 260 species are threatened by plastic debris because of entanglement and/or ingestion. Moreover, in time, plastic breaks down into smaller fragments and filaments (microplastics) that fish and shellfish species may ingest, causing microplastics to progressively accumulate across the food chain up to the top predators, including humans.

In this context, sea turtles (Caretta caretta) represent a flagship species. Indeed, they allow monitoring the level of plastic pollution in the sea because their health strictly connects with that of the environment they live in. Plastic waste, in particular, is a dangerous threat for them: sea turtles often mistake plastic waste for preys and eat or ingest them while moving around, or feed on small fish that previously ate plastics.

Researchers tried to study their environmental context as precisely as possible. They analysed the faecal samples of 45 turtles hosted at the Sea Turtles Rescue Center (CRTM) of the “Fondazione Cetacea” in Riccione (Rimini, Italy). Pollution in the Adriatic Sea is mostly due to intensive fishing, fish farming and tourism and it is at a worryingly high level. This is indeed confirmed by the plastic debris contained in all 45 samples.

“Our results show that all 45 samples under study contained plastic waste no matter how long the turtles stayed at the rescue centre,” says Prof. Silvia Franzellitti who is one of the authors of the study and works at the Lab of Environmental and Animal Physiology of the University of Bologna. “A comparison of our dataset with the existing literature on the matter is difficult to carry out because previous studies considered data obtained from necroscopies on dead animals. Despite this, our research suggests that the level of plastic contamination in the faeces of the observed turtles is very high both in terms of the number of animals that ingested plastic and of the concentration of plastic debris in their faeces”.

PLASTICS AND THE GUT MICROBIOTA

The data of this study tell us something about marine pollution and the turtles’ health. Once ingested, plastic debris piles up in the last part of their intestinal tract, where it can stay for weeks before being expelled. Here plastic debris can cause epithelial damages as well as favour toxic chemicals to be absorbed. Finally, plastic debris can force changes in the gut microbiota, eventually altering its composition and functioning.

The microbiota plays a central role in all vertebrates: it helps digestion and the assimilation of nutrients, regulates metabolism, engages with the immune system and helps prevent pathogenic colonization. This is why any change in the microbiota can have serious consequences on the health of the organism.

“Our analysis allowed us to link the presence of plastic debris to specific pathological alterations of the gut microbiota of the turtles and the consequent negative effects on their health”, states Elena Biagi. “For instance, our results show that plastic debris can act as a carrier of some bacterial communities that evolved to thrive alongside toxic chemicals or of some pathogens that are usually found in marine environments. These bacteria and pathogens could then reach the turtles’ intestinal ecosystem through plastic debris”.

THE AUTHORS OF THE STUDY

This study crucially confirms that reducing plastic waste in the sea is of the utmost importance. Fondazione Cetacea and the University of Bologna (Unit of Microbiome Science and Biotechnology of the Department of Pharmacy and Biotechnology and the Lab of animal and environmental Physiology of the Department of Biological, Geological and Environmental Sciences) worked together to achieve these important results. This study was also possible thanks to the participation of the institutions involved in Fano Marine Center, an international hub for research and marine ecology and biology in the Mediterranean Area.

Fondazione Cetacea is an NGO that focuses on marine ecosystem protection and, more precisely, on the Adriatic Sea through actions of dissemination, education and conservation. Fondazione Cetacea also manages the Sea Turtles Rescue Center (CRTM) where, every year, dozens of turtles that were entangled in fishing nets or stranded during winter are taken care of and then released back into the sea. These results are also a virtuous example of how scientific research and biodiversity protection and preservation can successfully combine with easily collectable samples of indicators of the marine ecosystem health.

This study was published in the journal Frontiers in Marine Science with the title “Impact of plastic debris on the gut microbiota of Caretta caretta from Northwestern Adriatic Sea”. The authors are Elena Biagi, Margherita Musella, Giorgia Palladino, Daniel Scicchitano, Simone Rampelli, Silvia Franzellitti and Marco Candela all from the University of Bologna, and Valeria Angelini, Sauro Pari, Chiara Roncari from Fondazione Cetacea Onlus.