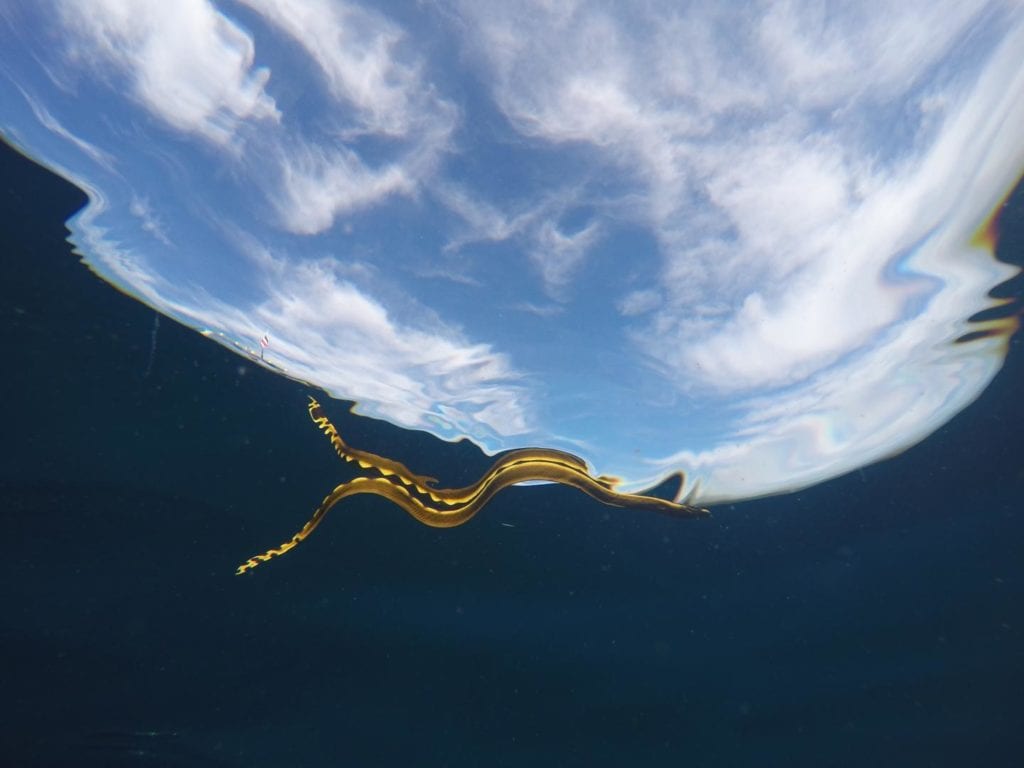 Surrounded by salty water, sea snakes sometimes live a thirsty existence. Previously, scientists thought that they were able to drink seawater, but recent research has shown that they need to access freshwater. A new study published in PLOS ONE on Feb. 7 and led by Harvey Lillywhite, professor of biology of the University of Florida, shows that sea snakes living where there is drought relieve their dehydration as soon as the wet season hits, and do so by obtaining freshwater from “lenses” that form on the surface of the ocean during heavy rain–events in which the salinity at the surface decreases enough for the water to be drinkable.

The yellow-bellied sea snake (Hydrophis platurus) is the only reptile in the order Squamata that lives on the open sea. It has one of the largest geographic ranges of any vertebrate species. Given its broad range and seafaring existence, during the dry season (6-7 months at the study site in Costa Rica) it has no access to freshwater. How they survive in regions of drought seems to hinge upon access to freshwater lenses, but little is known about how marine vertebrates react to or consume rainfall. “This study contributes to a fuller understanding of how pelagic sea snakes, and possibly other marine animals, avoid desiccation following seasonal drought at sea,” said Lillywhite.

The researchers captured 99 sea snakes off the coast of Costa Rica (interestingly, the snakes have never been observed in estuaries) and offered them freshwater in a laboratory environment. The team happened to be there just as six months of drought broke and the rainy season began. They found that only 13 percent of snakes captured after the rainfall began accepted the offer, compared to 80 percent of those captured before. The rainfall must have quenched their thirst.

The study continues many years of work by Lillywhite. The present paper was coauthored by Mark Sandfoss, Lillywhite’s current PhD student, Coleman Sheehy, his former student who is now the Collections Manager in Herpetology at the Florida Museum of Natural History, and then-Fulbright visiting scholar Jenna Crowe-Riddell.

“How these animals locate and harvest precipitation is important in view of the recent declines and extinctions of some species of sea snakes,” said Lillywhite. The question remains: How will climate change and its effects on precipitation impact the sea snakes?

Munitions at the bottom of the Baltic Sea